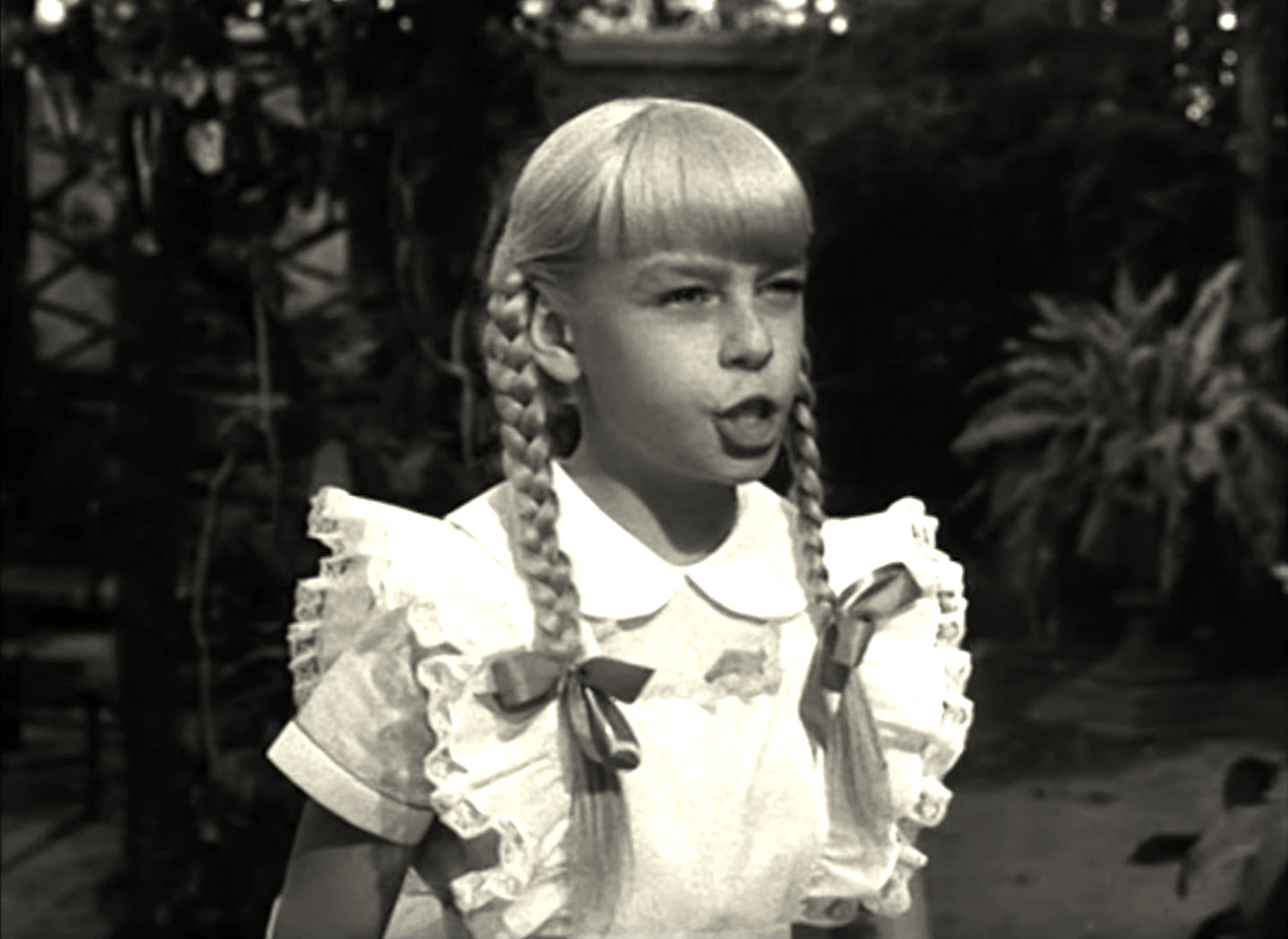 In the pantheon of movie brats, there are few who can compare to Rhoda Penmark, the pint-sized predator of Mervyn LeRoy’s The Bad Seed (1956). With her braided pig tails, impeccable manners, and immaculate clothes, Rhoda seems like every parent’s dream. But make no mistake, this young lady has killed before — her victims including both adults and children — and will gladly kill again, seemingly without conscience. Who is this child?

Adapted from Maxwell Anderson’s 1954 play of the same name, which in turn was based on a novel by William March, The Bad Seed tells the story of the Penmark family: career military man Kenneth (William Hopper), his devoted wife Christine (Nancy Kelly), and their apparently happy, healthy eight-year-old daughter Rhoda (Patty McCormack). On the surface, their lives seem ideal. Sure, Kenneth’s job takes him away from the family for long stretches, but Christine is keeping up the home front very nicely, and besides, Rhoda is such an excellent student and an exceedingly polite, affectionate daughter.

What’s there to worry about? Plenty.

Rhoda may have convinced nearly all the adults around her, including her parents and their kindly neighbor Mrs. Breedlove (Evelyn Varden) that she’s a perfect little angel. But there’s one grownup who is certainly not convinced — Leroy (Henry Jones), the seedy, creepy caretaker who works at the building where the Penmarks and Mrs. Breedlove live. Leroy alone knows what a conniving and manipulative little creature Rhoda truly is, and Rhoda shows Leroy a side of her personality she doesn’t dare show anyone else — her true, ugly self.

In short order, the Penmarks’ insular world of suburban bliss implodes when one of Rhoda’s classmates, poor little Claude Daigle, dies under violent circumstances. The evidence all points to Rhoda as the killer. Worried only about getting caught, Rhoda commits another killing simply to cover her tracks. And these events are just the latest examples of Rhoda’s cold-blooded, sociopathic behavior. The child may already be planning future murders. Woe to anyone who gets in her way!

Amid all this turmoil, the central character of The Bad Seed is really Christine Penmark, Rhoda’s loving and protective mother. The movie focuses on Christine’s unfathomable grief as she realizes that the child she nurtured and loved for years could actually be a heartless murderess. Naturally, Christine is tortured by unanswerable questions. Is she somehow responsible for creating this monster? What did she do wrong as a parent? And what about the affection she received from Rhoda over the years? Was it all just an act? Is Rhoda even capable of love?

The movie offers sort of an explanation for Rhoda’s alarming behavior. We’ll get to that in a moment.

I’ve been thinking a lot about Christine and Rhoda Penmark since I finally caught up with Lynne Ramsay’s We Need to Talk About Kevin (2011), a film that echoes The Bad Seed in numerous ways. It too, has literary roots, being based on a 2003 novel by Lionel Shriver. This film is also about an anguished mother dealing with the fact that her child is a heartless murderer. In this case, the mother is successful travel writer Eva Khatchadourian (Tilda Swinton), and the child is her cunning, deeply unsettling teenage son Kevin (Ezra Miller).

But where Christine from The Bad Seed was blindsided by tragedy, Eva saw it coming from a thousand miles away. We Need to Talk About Kevin is told largely in flashbacks, after the title character has already committed unspeakable, unforgivable acts. Eva spends a lot of her time slumped dazedly on a couch, gobbling down prescription pills (heavy duty tranquilizers, I’m guessing) and reflecting on her nightmarish experiences as a wife and mother. It must have been clear to Eva that little Kevin — cruel, calculating, and aloof from even his earliest days — was destined for infamy. When we see him as a toddler and a grade-schooler, he seems to be biding his time until he grows up and can inflict some real damage on the world. Sometimes, all Eva can do is watch in defeated silence as she awaits the inevitable.

Much like Christine Penmark, Eva has a real dilemma on her hands, one in which every possible outcome is awful. Once she learns the truth about Rhoda, Christine attempts to kill both herself and the child. Eva never goes this far, but the thought must have occurred to her a thousand times as she observed Kevin growing up. The husbands are no help at all in these movies. Eva’s spouse Franklin (John C. Reilly) is a lot like Kenneth from The Bad Seed (i.e. an amiable, trusting schlemiel who only believes the best about his child and who is often absent from the home for job-related reasons). Kevin and Rhoda both have their fathers completely fooled. They know when and how to turn on the charm.

One major difference between Kevin and Rhoda is that the latter tries to charm both of her parents. (South Park‘s Eric Cartman has been known to imitate Rhoda when sweet talking his own mother.) Kevin, on the other hand, is his daddy’s little angel but his mommy’s little devil. Never comfortable with being a mom, Eva tries every possible parenting approach with Kevin. In The Bad Seed, Christine and Leroy act as good cop and bad cop respectively with Rhoda, but Eva is so utterly alone in her story that she has to be both good and bad cop. Sometimes, she tries to be gentle and loving. Other times, she tries to be stern and strict. At one particularly miserable point in her life, she is even driven to an act of physical violence against Kevin. But nothing seems to change him.

In both films, the mother has to deal with her own, very raw anguish while also serving as a focal point for the grief and anger of others. One of the most memorable characters in The Bad Seed is Hortense Daigle (Eileen Heckart), who is trying to numb the immeasurable pain of her son Claude’s death by getting extremely drunk and confronting Christine face-to-face in Christine’s own home. In We Need to Talk About Kevin, similarly, Eva’s house is vandalized and Eva herself is slapped across the face by the mother (Leslie Lyles) of one of Kevin’s victims. This woman, identified in the credits only as “Smash Lady,” is clearly going through a crisis of her own and doesn’t know how else to cope.

The obvious question in all this is: why do Rhoda and Kevin act as they do? I mentioned earlier that The Bad Seed offers its own explanation for the tragedy. Christine, you see, was adopted. Richard (Paul Fix), the kindly man who raised her, was not her biological father. Her real dad was a notorious serial killer. The movie treats this as a big revelation, and Christine immediately decides that little Rhoda must have inherited the evil gene, which apparently skips a generation (like baldness). Richard says this is nonsense, but do we believe him? After all, the movie is called The Bad Seed, suggesting that Rhoda was bad/evil from the moment of conception. Likewise, I’ve seen reviews of We Need to Talk About Kevin that describe the title character as a bad seed.

In a way, the idea of a “bad seed” is comforting. It exculpates us. This kid was just destined to be bad we tell ourselves, like a train headed down a track to a certain destination. But is it true? The Bad Seed was made during an era when audiences likely wouldn’t accept ambiguity. After the war, they wanted clear, definite answers to troubling questions. The ending of The Bad Seed even had to be altered for the big screen so that Rhoda receives her unmistakable comeuppance, delivered by God.

In Alfred Hitchcock’s Psycho (1960), released just four years after The Bad Seed, a pompous psychiatrist explains away Norman Bates’ homicidal rampage with a monologue about the young man’s dual personality disorder. But Hitchcock ends the film with a shot of the grinning, totally delusional Norman, who in my opinion is as mysterious and unknowable as ever. The psychiatrist’s monologue is just so much hot air.

We Need to Talk About Kevin is the product of a blurrier, more uncertain age. It offers no easy, pat answers. Even Kevin himself, now a guest of the state, can’t explain his actions by the end of the movie. Viewers will come away from the movie with their own ideas as to what could have and should have been done differently.

The Bad Seed and We Need to Talk About Kevin make for a queasy, gut-churning double feature, especially for parents or those considering becoming parents. I’m not sure I’d recommend either to pregnant women. But I hope that there’s a heaven for fictional characters somewhere so that Christine Penmark and Eva Khatchadourian can finally meet and talk and compare notes. These two women understand each other in a way few others could.