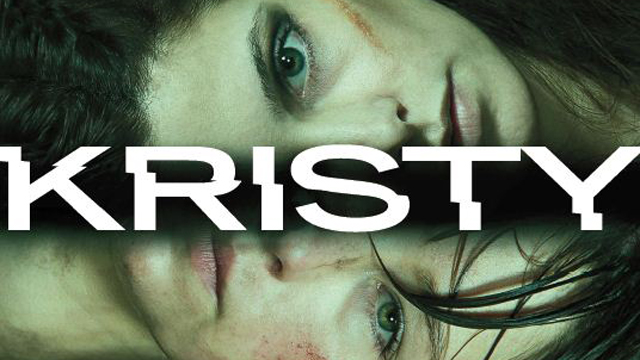 The reason fans still can’t stop talking about Eli Roth’s trailer for faux film Thanksgiving is because it filled a gap left behind by a serious lack of Thanksgiving horror films over the years. Unlike Christmas, horror movies set on Turkey Day are few and far between, and films like Blood Rage, Home Sweet Home and Thankskilling all left much to be desired. But a new one arrives this year, straight off of… Lifetime?!

Directed by Oliver Blackburn (Donkey Punch), Kristy premiered on Lifetime this past October, and is now available on Netflix. The film centers on a college student by the name of Justine who decides to stay on campus over Thanksgiving weekend, and her peaceful alone time takes a turn for the worse when a group of masked murderers invade the school. She’ll have to outwit and outplay in order to survive.

It’s only fair that I mention, right off the bat, that Kristy isn’t quite the Thanksgiving slasher that fans of holiday horror may be hoping it is. True, it does take place over Thanksgiving break, but save for a few passing mentions to the holiday, including sparse decorations and a scene that sees the main character cooking up a turkey pot pie in the microwave, there’s not much of a Thanksgiving theme to this one.

While it may not become an annual holiday staple, the good news is that Kristy also isn’t the sort of movie you’d ever expect to find on Lifetime. Aside from a strong focus on female empowerment, it’s hard to imagine why they even decided to pick it up, so even if the idea of a Lifetime original horror movie (it’s not, by the way) sounds awful to you, I assure you that you need not be bothered by its ties to the network.

This year has seen somewhat of a slasher resurgence, and there have more specifically been several movies that have played on the idea of the so-called final girl/survivor girl. Fitting in line with the others, thematically speaking, Kristy is in many ways the ultimate final girl horror movie, as Oliver Blackburn fast-forward the sub-genre’s typical second act and focuses primarily on that warrior-like transformation.

Kristy rides almost entirely on the shoulders of actress Haley Bennett, who is often the only one on screen. Others come and go but Justine is the sole focal point for much of the film, and despite a lack of character development, Bennett’s portrayal brings a whole lot of likability to the character. Thanks to her strong performance, you genuinely care about Justine, which goes a long way in the film’s favor.

Like many slashers that have come before it, Kristy is set on a college campus, and Blackburn squeezes optimum atmosphere out of the long corridors and empty dorm rooms. The director’s second horror film is essentially one big chase sequence, and for a movie confined to one main location, it’s surprisingly dynamic. Blackburn rarely films the same area twice, exploring the full grounds both inside and out.

There’s admittedly not much to the story with this one, and the chase sequences do often get repetitive, but there’s a sense of style to Kristy that imbues the proceedings with a certain freshness as well as an admirable energy. Blackburn is one hell of a talented director and the film never looks anything less than beautiful, and no matter how repetitive it tends to get, there’s somehow never a dull moment to be found here.

But again, it’s largely Bennett’s performance that elevates the material, as you fear for Justine when she’s in peril and cheer for her when she overcomes the seemingly never-ending assault of obstacles placed in front of her. By the end of Kristy, it’s hard not to add Justine to any given list of the genre’s best final girls, and watching the character become that powerful warrior is the true joy of this one.

Despite ending on an odd note, which comes courtesy of a line of dialogue I personally could’ve done without, Kristy is a welcome addition to that aforementioned modern day slasher movie resurgence, packed with no shortage of style and a suitable level of tension. It certainly doesn’t reinvent any wheels, but as a reminder of what a true final girl is, Blackburn’s latest serves as a nice sub-genre refresher course.

Whether on Thanksgiving or any other night, slasher fans should stream this one.