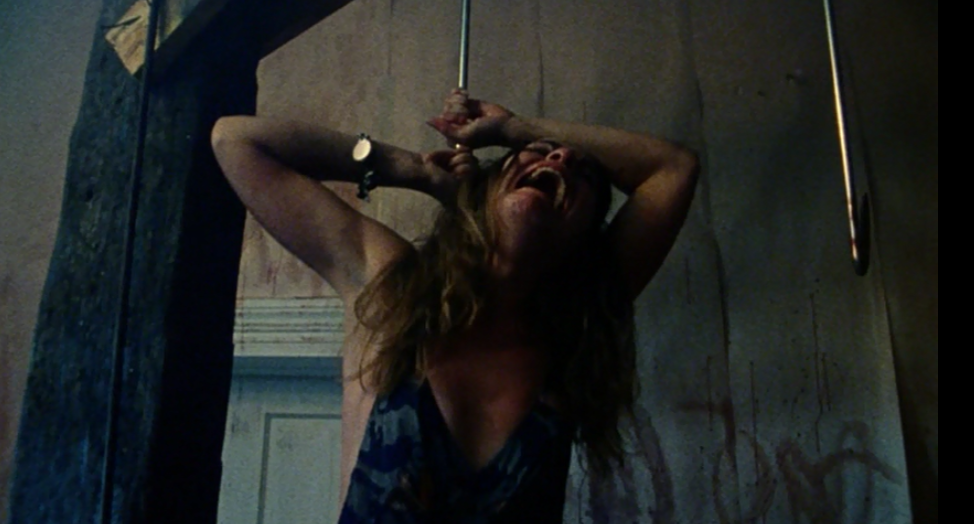 Early on in Tobe Hooper’s The Texas Chain Saw Massacre, Sally and friends pass by the local slaughterhouse on the way to their unfortunate fates, and Franklin entertains the van full of hapless victims with stories about what goes on inside the building. He talks about sledgehammers being used to bash in the brains of cattle, grossing everyone out by noting that it typically takes more than one shot to do the job.

Those who have seen the film will realize upon re-watching it that Franklin’s monologue is Hooper’s sick tease of what’s to come, and Kirk’s death scene in particular plays out exactly the way Franklin foreshadows. In one of cinema’s most downright terrifying moments, Leatherface bashes Kirk over the head with a mallet, and much like the cattle at the slaughterhouse, an additional blow is required to finish him off.

“People shouldn’t kill animals for food,” Pam responds when Franklin begins talking about the slaughterhouse, and though one could easily write off the line of dialogue as the viewpoint of a fictional character, it’s clear to me that Pam’s condemnation of the meat industry is one shared by Tobe Hooper himself. Because movies don’t get much more pro-vegetarian than The Texas Chain Saw Massacre.

Whether originally intended or not, Hooper’s horror classic exposed the meat industry in a way that was ahead of its time and is still, to this day, more impactful than perhaps anything else. Back in the early ’70s, the horrors of the industry weren’t as commonly known as they are today, and we have the internet and various documentaries to thank for taking us into those buildings and showing us what goes on inside.

But despite how horrifying that real-life slaughterhouse footage is, there’s a certain disconnect that many feel upon watching it. Most of us have been raised to view non-domesticated animals as little more than food for us to eat, and so when watching a video of pigs being sliced open and hung on meat hooks, it’s unfortunately easy to pretend the animals have no feelings – and brush the nightmarish visuals off.

With The Texas Chain Saw Massacre, however, Tobe Hooper completely flipped the script, showing slaughterhouse techniques being carried out not on animals, but rather on humans. With the squealing Leatherface playing the role of a massive, hulking pig, the film horrifically reversed the equation, hitting us all over the head – whether we realized it or not – with a scathing indictment of the meat industry.

Much the same way he did at the slaughterhouse, Leatherface bashes his human victims over the head, hangs them on hooks, and stores their bodies in freezers, and it’s heavily implied – and later confirmed in the sequels – that the family consumes the meat. Leatherface even disguises himself by peeling off their faces and wearing them as his own, a barbaric act of brutality worthy of our darkest nightmares.

The cannibal clan is indeed one of the most barbaric in movie history, but what’s perhaps most horrifying about The Texas Chain Saw Massacre is that there are direct parallels between them and, well, possibly even yours. Leatherface and the gang kill, consume, wear, and decorate their home with innocent human victims, and if you don’t see where I’m going with this, it’s cause, like Sally, you simply don’t want to.

“I like meat,” Sally tells Franklin. “Please change the subject.”

It should come as no surprise that Tobe Hooper stopped eating meat while making The Texas Chain Saw Massacre, and you can count fellow filmmaker Guillermo del Toro among the many who made the lifestyle change after watching it. As Hooper once noted, the film is “about the chain of life and killing sentient beings,” and by using humans in the place of animals, he drove his point home in an unforgettable way.

After all, it’s only when we see things done to US that we realize how horrifying they truly are.

NECESSARY DISCLAIMER: This post was not written to condemn anyone who does eat meat, but rather to point out a theme running through the film that isn’t often talked about. For what it’s worth, I have been a vegetarian for several years – and if Texas Chain Saw Massacre is partly responsible for that, it’s news to me.