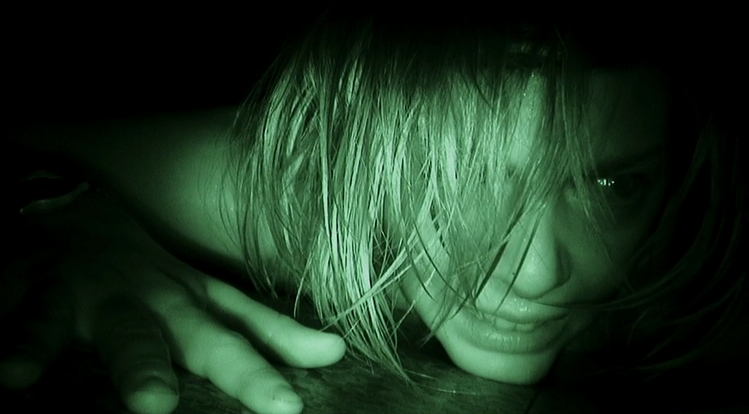 It’s time for another very real fear/phobia and a look at the horror movie moments that sufferers would be wise to avoid.

For most people a fear of the dark isn’t about the darkness itself, it’s a fear of what could possibly be hiding within the shadows, unseen and concealed. Horrors created by the imagination.

When I was very young my parents would always leave lights on in the house at night. My brother and I had a habit of waking up to get a drink of water or go to the toilet and I think they were worried we would dive head first down the stairs or stand on the cat, who knows? When we were about 7-8 years old they stopped this routine and I vividly remember it leading to a couple of years where I was VERY uncomfortable in total darkness. It didn’t last, and these days I’m perfectly happy wandering the house at night … with my trusty shotgun!

The idea of monsters hiding in darkness has been a part of horror movies since the dawn of time, but in recent years viewers have been able to see the dangers before the characters do thanks to night vision ‘moments’ … Like any good idea it HAS become overused, especially since the explosion of ‘found-footage’ movies, but there are still plenty of well crafted examples to be found.

So turn off the lights and join me as I select some of my personal favorites (Which include spoilers!) …

It really does suck to be in New York during the Cloverfield incident. If you stay outside you run the risk of being squashed by the huge monster. If you head indoors or underground then chances are you will encounter the seriously aggressive ‘parasites’ that have been falling off the big guy and scuttling away to hang off ceilings in dark places. A classic “Behind you!” moment that works brilliantly.

I’m still not entirely sure what was going on in Renny Harlin’s recent horror movie adventure, but I enjoyed it, mostly. The ending seems to include time travel and teleporting mutants and worm holes AND some rejects from an Aphex Twin music video (Or were they the mutants??) …

Ok, this isn’t actually night vision but the light the cameras are giving off is the only illumination that is available to the seriously stressed out characters who are wandering around an abandoned house that may or may not be home to a creepy old witch … or child killer … or both! When Heather reaches the basement and finds Michael silently facing the far corner of the room, her screaming reaches a level that can only be heard by dogs before an unseen force finally shuts her up with a blow to the head. Subtle, but still creepy as hell.

I could fill an entire list with scenes from these never ending movies but I’ll stick to one, the conclusion from the original and best. After spending two hours silently staring at her partner sleeping, the possessed Katie (Katie Featherston), calmly leaves the room, goes downstairs, and starts screaming … a lot! … Micah (Micah Sloat), jumps into action and rushes off to investigate. Seconds later he is launched WWE style across the room and into the camera which falls to the floor. Katie returns, blood soaked and smiling. The moral of the story? … Stay in bed. Bed good. Outside world, BAD!

Some monsters in horror movies can smell fear, some can smell blood, some just smell humans. The Trolls in this excellent Norwegian movie from 2010 can smell your RELIGION! Yes, if you believe in god they will try to eat you, and no amount of roll-on antiperspirant will cover that!

What’s the only thing more useful than a night vision camera when you are trapped in a dark, dangerous situation? I’ll tell you, a high powered rifle with a night vision scope. You are good to go! Guide those kids to safety and everyone can end the movie happy and alive … Errr, sadly no. Scarlet (Rose Byrne), gets surprised by the ‘rage’ infected Don (Robert Carlyle), who grabs the awesome gun I’ve just been talking about and, well … he beats her to death with it. Thanks to the scope we get to see the thrashing up close and in gruesome detail, so it was slightly useful.

This movie is almost one long night vision shot, with my favorite moment being the seriously creepy sudden appearance of Dr. Arthur Friedkin, a surgeon who enjoys performing very unethical procedures, and a bit of black magic when he has nothing better to do. He’s also been dead for quite some time … which would explain the melting ghostly face incident.

3. The Silence Of The Lambs.

Long before Sam Fisher started crawling around ventilation shafts in the Splinter Cell games, the most famous user of night vision goggles was good old Buffalo Bill. They enable him to silently follow Clarice (Jodie Foster), around his insanely large basement, and this advantage seems to suggest our brave heroine is about to get a bullet to the head! Turns out Bill isn’t the smartest guy in the world, and when he loudly cocks his gun directly behind the well trained FBI agent the inevitable happens. Dead killer, lotion girl rescued, and Hannibal makes dinner plans.

There are a couple of brilliant night vision scenes within The Descent but my favorite is the epic jump scare moment a crawler is fully revealed for the first time. They may be unintelligent animals who have lived their entire lives deep underground but they still appreciate the value of a good scare just like the rest of us. Why start attacking the women immediately when you can sneak up behind them and wait with a creepy expression on your face! He was actually about to tap her on the shoulder before all the running and screaming robbed him of the opportunity.

The last few minutes of REC demonstrate just how terrifying a trapped in darkness scene can be if you add the necessary ingredients and really do it right. A slow, steady build up, genuinely pitch-black surroundings, random noises, disturbing discoveries, and finally … an incredibly tall and emaciated demon woman thing wearing stained underwear and carrying a hammer! I never like to judge a book by its cover, but she cannot be good news!

Even with the night vision this scene shows very little and at times it’s hard to work out what exactly is going on, but it all comes together and what you are left with is a brilliant conclusion to one of the best original horror movies in recent years.