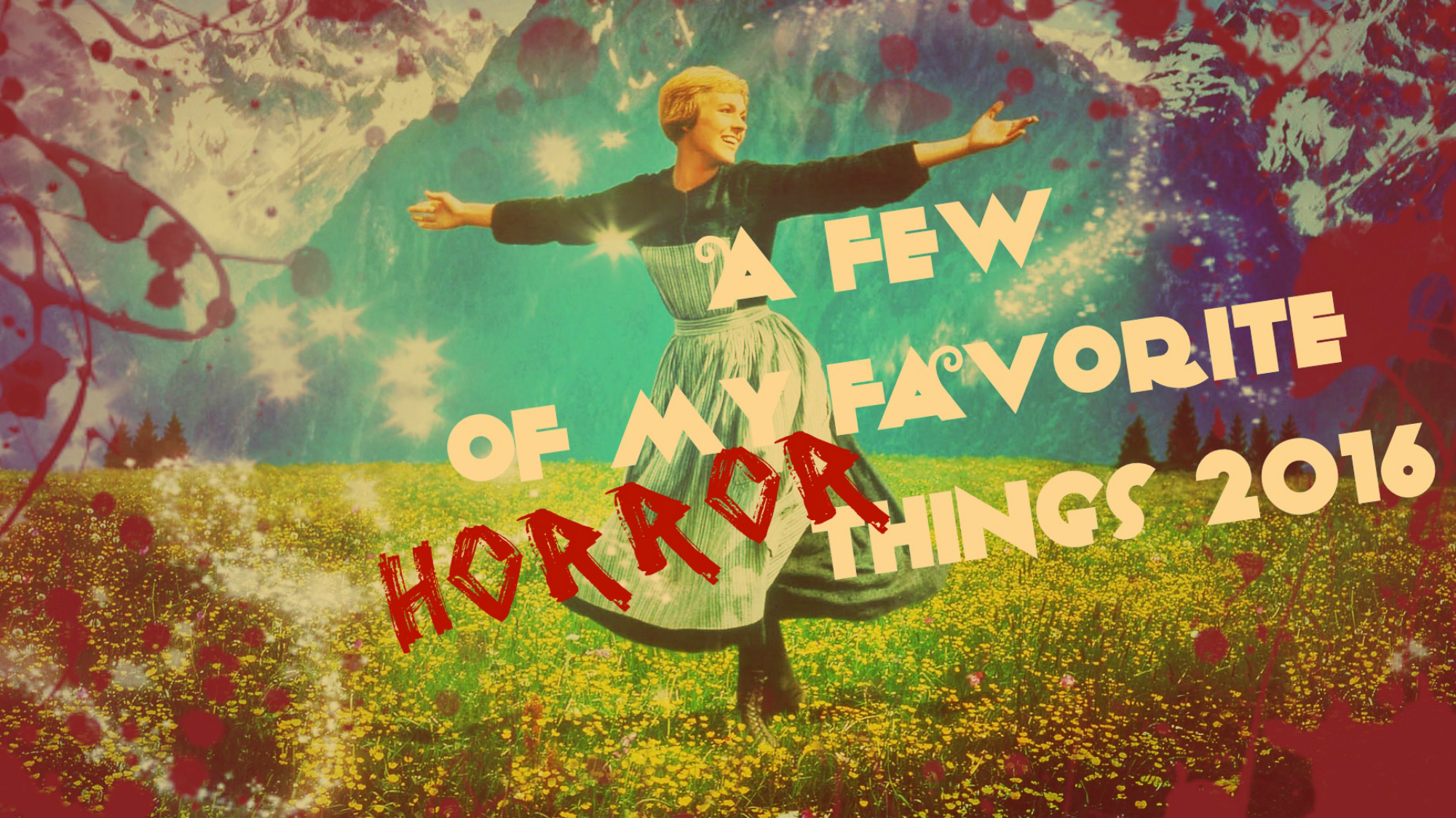 There are only a scant few days left in 2016 and while we can certainly look back on the past 12 months as…tumultuous, to say the least, it’s no surprise that the horror genre thrived amongst all the craziness. Horror always seems to reflect the pulse of the culture at any given time. With so many people feeling as if their voices aren’t being heard, horror is there to scream the loudest for us, to provide an outlet for our frustrations.

Our beloved genre took the box office by storm with studio releases both big and small; The Conjuring 2, Lights Out, Don’t Breathe, and The Witch all did gangbusters compared to their respective budgets. For those of you who have followed my articles, you may have noticed my personal taste leans more toward the classics and obscure entries peppered through the 70s/80s. I’m not against modern films, I just tend to be left a tad wanting by a lot of the stuff I see. 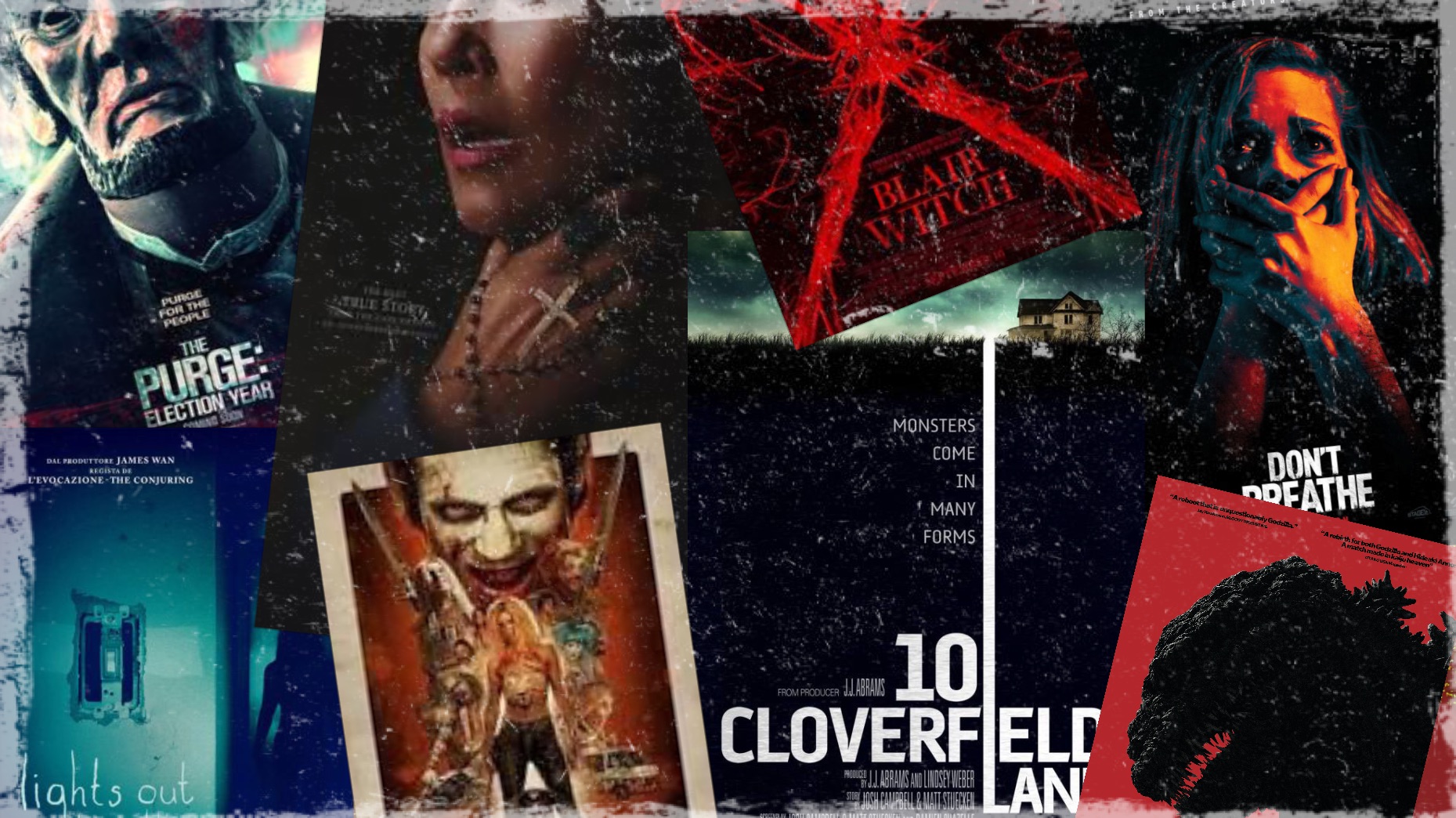 The problem is, that I’ve no doubt my hesitance to indulge in more new releases has caused me to miss out on a lot of great stuff. Even when I WANT to see a new flick I tend to put it off for months…or forever. Here are some films I’ve yet to check out from 2016 (but want to): I Am Not a Serial Killer, Train to Busan, Eyes of My Mother, The Greasy Strangler, and The Autopsy of Jane Doe. So, yeah, there’s a lot of good shit that just hasn’t made its way through to my retinas as of yet.

How could I possibly concoct a “Top 10” purporting to be the best of 2016 when there is so much from the year I’ve yet to see? I can’t, so…I’m going to give you some of my favorites. These aren’t necessarily the “best” films but for one reason or another they stand out as memorable experiences from my film-viewing 2016 self. Without further ado, here are my favorites in no particular order: 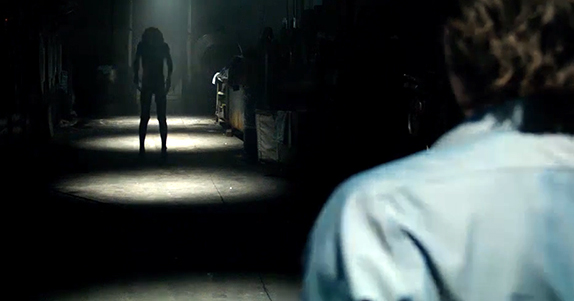 Lights Out really is a dumb movie. The script felt half baked with a lot of really great ideas that just weren’t fully formed. That said, the film deals with some heavy subject matter for a PG-13 popcorn fright flick and manages to setup one effective scare after the other. Sandberg has proven himself here as a director to watch. He’s managed to do the unthinkable; that is, he has me excited for the upcoming Annabelle 2 GASP. Who wouldathunkit?

Why was this such a great theatrical experience? Well, I had just lost my dog, Mulder, of 15 years. I wasn’t in the best of moods when a friend of mine (who doesn’t care for horror movies) told me she had tickets to an advanced screening of the film. We showed up to a packed auditorium full of rowdy folks looking to get the shit scared out of them.

The audience reacted to every scare by flying out of their seats, screaming, and then releasing the tension with a wave of laughter and streams of profanities leveled at the screen. Wash. Rinse. Repeat. Films get called “roller coaster rides” all the time, but I haven’t experienced a ride like this since My Bloody Valentine 3D (another film made infinitely better thanks to a lively crowd). To some, this might sound like a distracting viewing, but it was exactly what I needed. I wasn’t really feeling up to going out that evening, but I was glad I did.

This is the perfect “midnight movie” viewing experience that I wish was far more common. Once the credits began to roll on Lights Out I was smiling from ear to ear and walked out feeling lighter than air. The truth is a good scare is the best therapy for a horror nerd. My non-horror loving friend even had a blast with this one. I’ve yet to revisit the film and I might not for quite some time, but this is one of only a handful of theatrical screenings that I will remember for a long time.

This was the year of things seemingly coming out of nowhere to blow everyone away. Netflix, which has already proven itself as big competition to the major studios, took 2016 to make it known they were home to exciting and new genre content. First up: 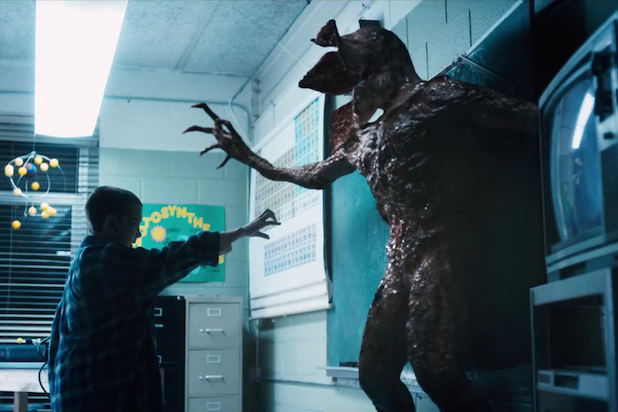 I won’t go into a lot of detail about this pitch-perfect homage to Stephen and Steven. There’s already more than enough articles about the show, but suffice it to say – it was one of the biggest surprises of 2016. It came out on a Friday with very little fanfare and by Monday was the internet’s full blown obsession. I watched the entire season in only two nights and can not wait for what the Duffer bros have in store for season 2. 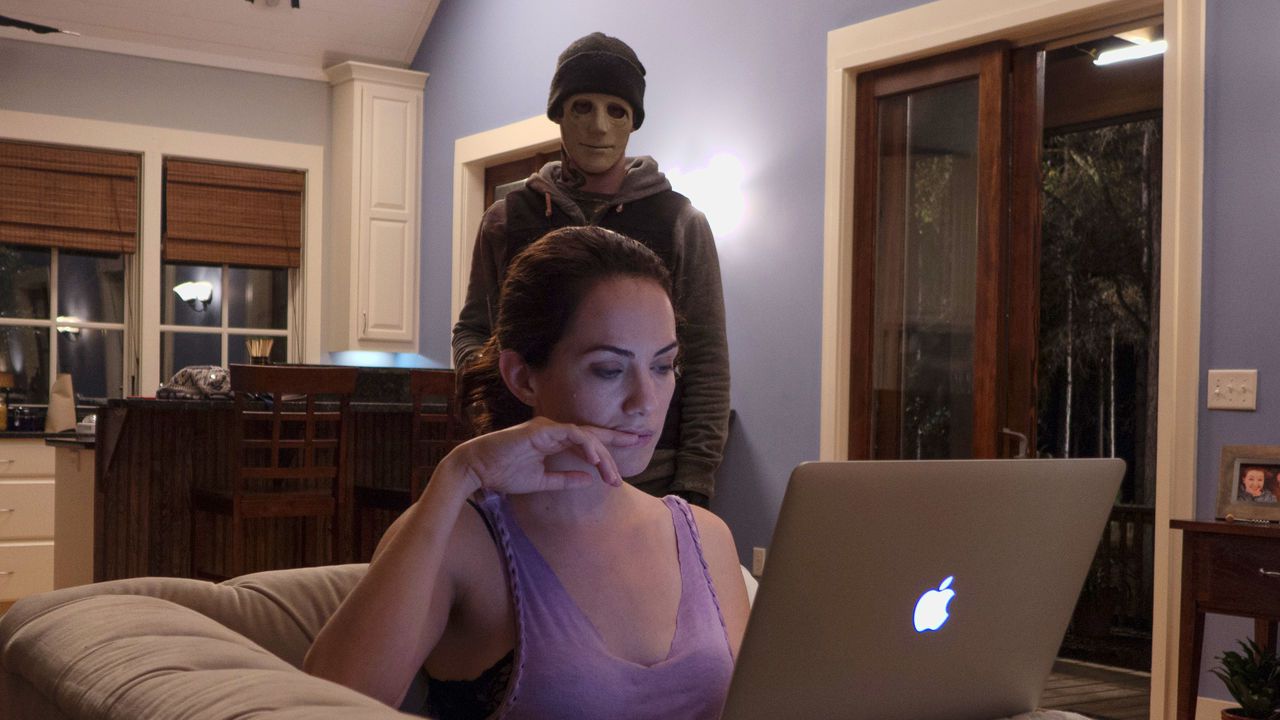 Another hit that dropped on Netflix was the Blumhouse production, Mike Flanagan directed, home invasion thriller, Hush. It was a case of perfect timing. The film premiered at SXSW to rave reviews only to pop up in my queue a couple weeks later. It was a brilliant move to ride on the buzz from the festival. The film itself might be minor in its scope but the amount of tension drummed up by such a simple premise is epic. Flanagan and his wife/co-writer/lead actress, Kate Siegel (whose performance as the deaf and mute heroine of the piece is outstanding) delivered one hell of a good film that fits right at home alongside Flanagan’s burgeoning resume (we won’t talk about Ouija 2).

All Through the House 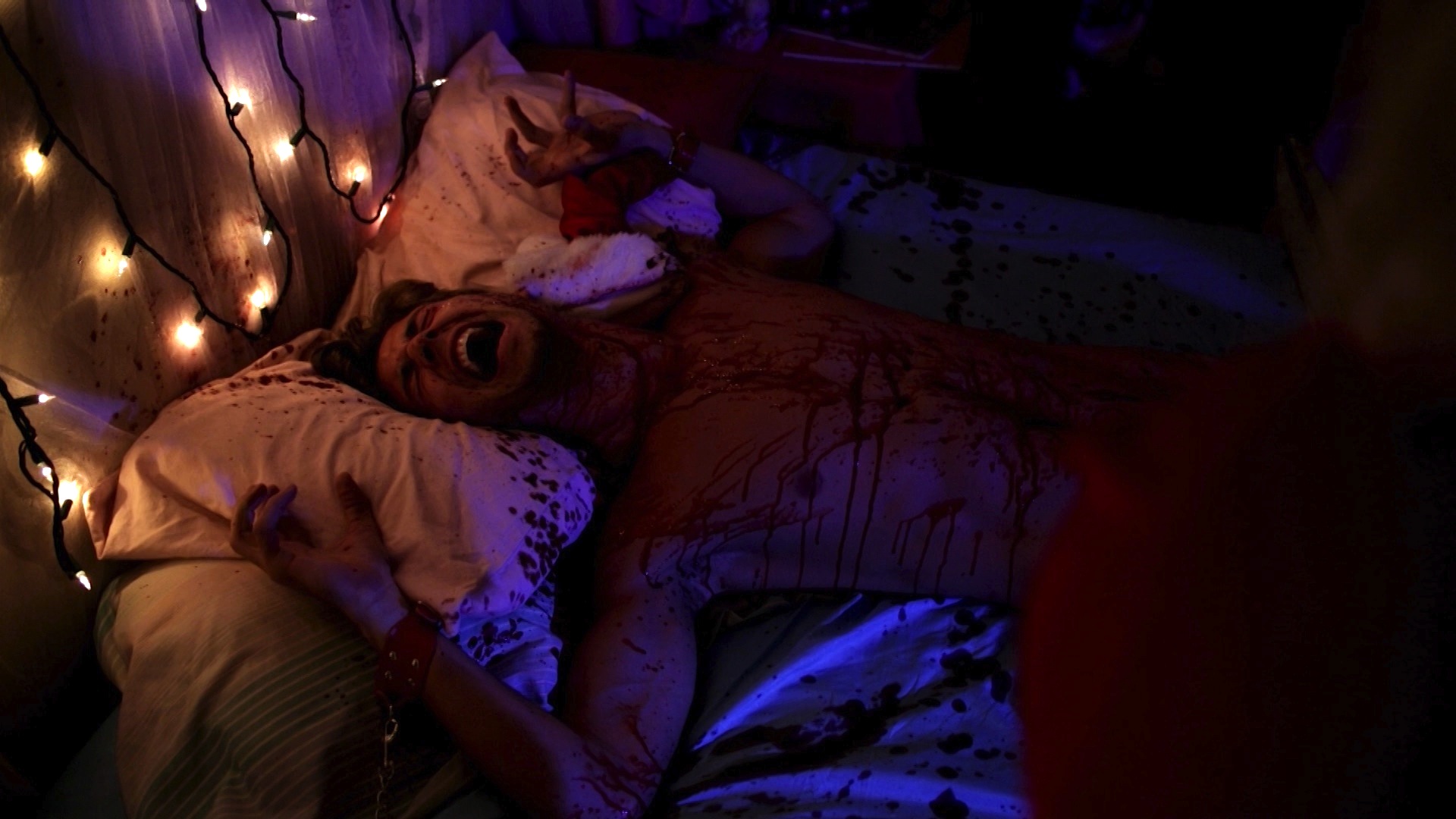 No, this one isn’t on Netflix (not yet anyway), but you can find it on pretty much all VOD services. I’ve already written about All Through the House a good deal with my review and interview with the film’s director, Todd Nunes. So, I won’t be diving into too much detail here. I’ll simply say that this is one micro budget flick that truly exceeded my expectations. It’s a fun throwback to the 80’s without resorting to cheap tricks like “missing reels” and faux film grain. It simply tells a straightforward slasher tale with heaps of style. Yes, there are trappings of micro budget cinema in spots but what works, works really well. Give this one a shot if you haven’t already.

It’s no mystery that genre television has blown up in recent years. What used to be fringe and for nerds only has become mainstream, and I’m totally okay with that. This year saw some great genre shows gracing our screens from the “no one thought it would actually be good” The Exorcist, the best season yet of Bates Motel, the aforementioned Stranger Things, and a mini slasher revival with shows like Slasher (natch), the return of Scream and Scream Queens, and failed attempts such as the super cornball but ultimately fun Dead of Summer whose finale was directed by the underrated Steve Miner tapping into his Friday the 13th: Part 2 roots (this is a seriously long sentence…I should apologize, but I won’t).

Despite this excess of riches on the telly, one show managed to rise above them all as my absolute favorite thing to plop down and watch every week:

The first season of Ash vs Evil Dead seemed like a gift to horror fans who never truly believed they would get a proper follow-up to The Evil Dead series. Nonetheless, here we are with a second season following the adventures of Ashley J. Williams and the Ghostbeaters with a season 3 already on the way.

I can honestly say the first season was fun and while I enjoyed it, it was not the epic return I had hoped for. The pace seemed way off with every thirty minute episode leaving me feeling as if chunks of the story were left out. Despite the episodes still maintaining their sitcom length, I never once felt the show was blazing too quickly through its plotlines. This season was just everything an old school horror fan could have dreamed of.

While last year relied a bit too much on CGI, this season was filled to the brim with some literally jaw shredding practical effects, and the penultimate episode which featured (VAGUE AF SPOILERS FOLLOW) some epic recreations of creatures and setpieces we loved from the original films, was a true testament to what can be done by blending practical with computer effects (END VAGUE AF SPOILERS). There were several moments that will go down in history as some of the best splatstick scenes in the horror genre. PERIOD.

If for some reason you didn’t keep up with AvED, if you thought the first season wasn’t what you wanted, or you just forgot about the show somehow, I urge to rectify the situation immediately. It’s time to binge.

Well, fiends, these are a few of my favorite things from the past year. Of course, we’ve only scratched the 2016 surface and I’ll be bringing you some more of my faves as we countdown the days to 2017. Stay tuned. As always, cheers!