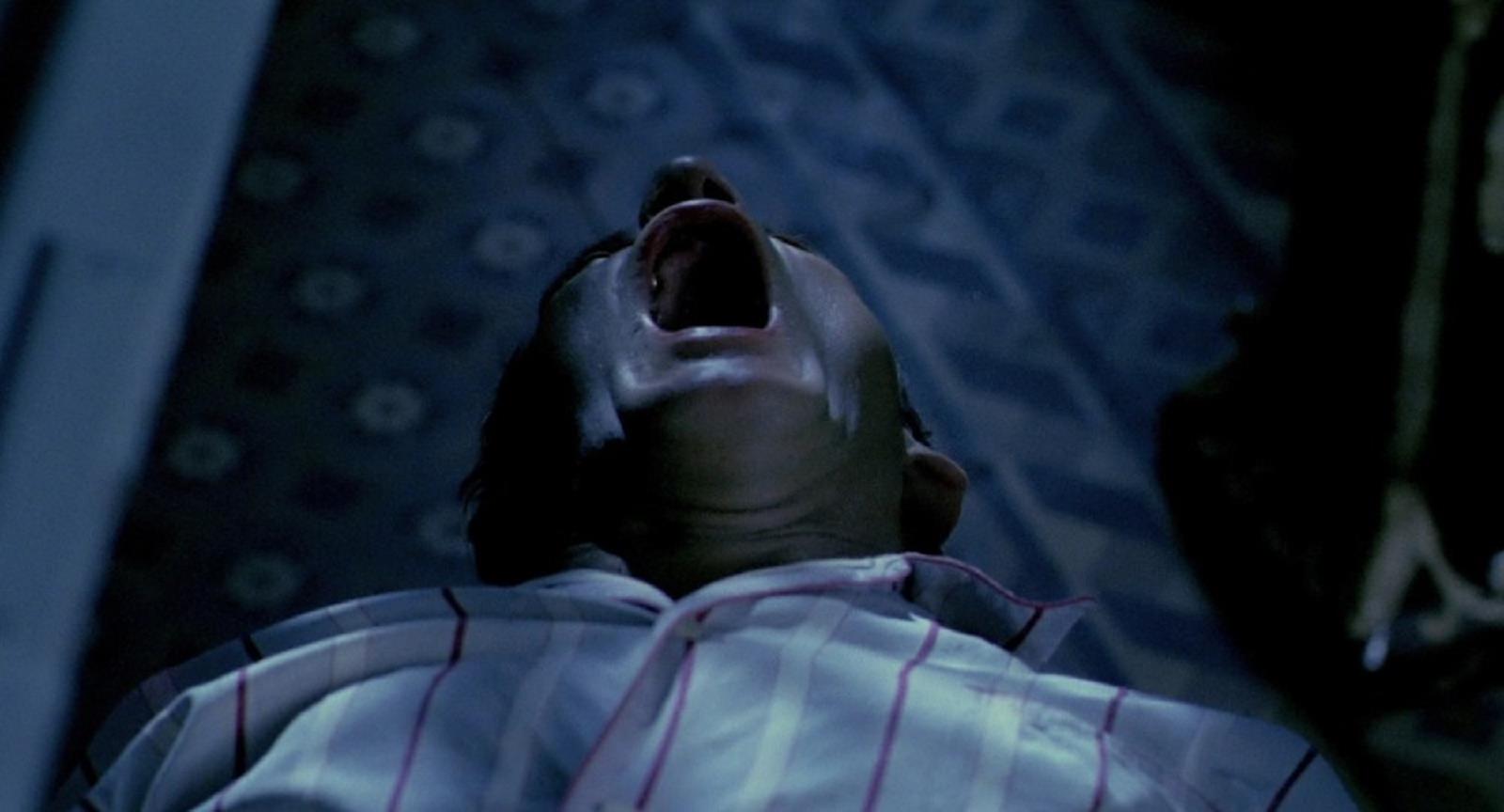 There was no logical reason that I feared iron lungs as a child. The medical devices were not in wide use during my lifetime; I certainly never knew anyone who used one. Still, I was both repelled and fascinated by the very idea of a machine that did your breathing for you and kept you encased in a coffin-like chamber from the neck down. I couldn’t help but obsess over them as a kid. To me, it was somehow worse than being buried alive.

Luckily, iron lungs don’t come up in popular culture very often. One of my few childhood flare-ups occurred when I heard the Weird Al Yankovic song “Mr. Frump in the Iron Lung” at a friend’s house. I must’ve been about eight at the time, and I was horrified by the prospect of someone even kidding about iron lungs, especially in such a flippant and frivolous way. Doesn’t Mr. Frump have enough problems without a song making fun of him?

This particular phobia of iron lungs must have abated sometime during my teen years, because I was later able to watch John Waters’ Cry Baby (1990) and the Coen Brothers’ The Big Lebowski (1998) — both of which feature the medical devices to comedic effect — without incident. However, I deliberately stayed away from the ultimate iron lung movie: the Spanish arthouse shocker In a Glass Cage (Tras el Cristal — 1986), written and directed by Agustí Villaronga. This one frequently turns up on lists of the most extreme and controversial movies ever made, and I kept my distance from it for decades.

Recently, however, my curiosity got the best of me, and I finally watched In a Glass Cage. It both was and wasn’t the movie I was expecting after years of build-up. It certainly deals with dark and disturbing subjects, just as I thought it would, and I easily could see why the film had been the source of such controversy for years. I’d read enough about the movie to have a basic understanding of the plot, and the actual movie more or less aligned with those alarming synopses I’d been seeing.

On the other hand, In a Glass Cage was much less explicit than I had anticipated, with the most horrific acts occurring just out of frame. I had not expected such restraint. It was manifestly well-made, too, with the cinematography, scoring, editing, and acting especially worthy of praise. This was clearly a work of art, rather than an exploitation film. It constitutes an astonishingly assured debut from Villaronga. However, I would not hesitate to call In a Glass Cage a horror film or a thriller. I don’t think those terms diminish it or trivialize it. In fact, I was relieved to find that other critics had compared the film to the works of Hitchcock, since I’d been having similar thoughts during my viewing. I would also say the movie bears a passing resemblance to Robert Aldrich’s What Ever Happened to Baby Jane? (1962).

For the uninitiated, the movie centers around an ex-Nazi named Klaus (Gunter Meisner). Having tortured and killed children during the Holocaust, he found himself unable to stop once the war was over. He was addicted to death and suffering by then. He craved those things like a junkie craves heroin. The story begins with Klaus killing what he thinks is his last victim and then leaping from a tower to end his own life. The fall does not kill him, however, but instead leaves him confined to an iron lung. Haunted by his past, he lives out his final days in a large, remote house in the country with his embittered wife Griselda (Marisa Paredes) and taciturn young daughter Rena (Gisèle Echevarría). Neither Griselda nor Rena know anything of Klaus’ past, though Griselda resents her husband and wishes he were dead. She takes out some of her frustration on poor, passive Rena.

Into this profoundly dysfunctional family comes a wide-eyed young man named Angelo (David Sust), who dubiously claims to be a nurse and says he wants to take care of Klaus. In reality, Angelo is one of Klaus’ surviving victims. Does he seek revenge on his abuser? Yes, but that’s just part of what he has planned. Angelo becomes Klaus’ jailer, torturer, lover, acolyte, and greatest student. The former Nazi had meticulously recorded his unforgivable deeds in words and pictures, and his young “nurse” studied this material with an almost religious devotion. Since Klaus cannot leave his “glass cage,” Angelo intends to carry on his work.

The film’s most horrific scenes involve Angelo rounding up young boys (he obliquely refers to them as “palomas,” meaning doves) from the nearby village and bringing them home to torture, humiliate, and kill in front of Klaus. Obviously, Klaus is in no condition to stop this. In a Glass Cage has run afoul of censors in multiple countries, and I believe these scenes are the cause. Again, though, I want to emphasize that Villaronga demonstrates restraint even here. He shows us just enough so that we get the idea of what Angelo is doing without going into surgical detail. Sometimes, the looks on people’s faces can communicate so much.

The always-angry Griselda quickly realizes that Angelo is no nurse and tries to get rid of him multiple times, but Klaus insists that the mysterious young man (who knows all the dirt) be retained at all cost. Meanwhile, Rena actually prefers Angelo to Griselda, since the former at least speaks to her in a gentle way. The most suspenseful sequence in the film occurs when Angelo decides to kill Griselda so that he can completely take over the house without her constant interference. Once the lady of the house is out of the way, Angelo reveals his ultimate plan, which involves Klaus and Rena in a way neither could have anticipated.

The central fact of this movie is that its main character, Klaus, spends the entire film in one room, forever dependent upon the iron lung. The rhythmic wheezing of the machine becomes an integral part of the movie’s soundtrack. It may remind some of the mechanical breathing of Darth Vader. (Come to think of it, Darth himself is basically wearing a portable iron lung wherever he goes.) Unlike the Star Wars villain, however, Klaus himself is never portrayed sympathetically; the movie is very clear that he has committed numerous, horrific crimes against children in the past and would still be committing such crimes now if he were physically able to do so.

On the other hand, Klaus is a fragile, extremely vulnerable human being whose health and safety are in constant jeopardy throughout the film. When he is removed from his iron lung (or the machine is unplugged), actor Gunter Meisner’s face registers incredible, intense agony. It is impossible to witness this and not feel something. Klaus showed his victims no mercy, but does that mean that we in the audience are free to revel in his suffering? If we do, have we descended to his level?

In a Glass Cage raises many uncomfortable yet worthwhile questions, and that’s why I believe it should be more widely seen. I do not agree with those critics who contend that the film is merely an excuse to wallow in cruelty and depravity. Instead, the film asks us to examine that cruelty in detail and think about what it truly means. Did this capacity for violence always exist within Klaus, for instance, or did his wartime experiences change him permanently for the worse? And what of Angelo, this seemingly unknowable character? We can easily understand the young man’s desire for revenge, but do we also comprehend his desire to make others experience the suffering that he endured? Does cruelty always beget cruelty? Are we doomed as a society to a never-ending cycle of abuse?

Villaronga’s film offers no easy solutions, no pat answers. It is the farthest thing from a “feel-good” or “life-affirming” movie. It’s one the rare films that I recommend people watch alone in silence. Then, after the end credits, go stare at yourself in a mirror for a few minutes.