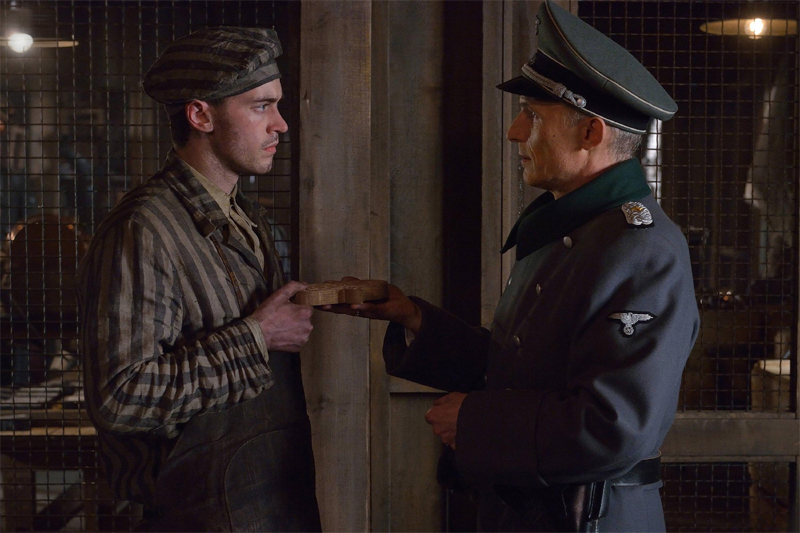 If there’s any take-away from last night’s episode of The Strain it’s that Thomas Eichorst is one of the best villains on television right now. More than anything, ‘For Services Rendered’ was a showcase of the character’s never-ending evil, and goddamn is German actor Richard Sammel frightening in the role.

The latest episode of FX’s vampire series kicked off with the full-on transformation of lawyer Joan Luss, one of only two remaining survivors of the airline disaster. Returning home from a business trip, Luss’ husband came face-to-face with his vampified wife, after fending off an attack from several other monsters roaming the premises.

More on that in a minute…

As was hinted at the end of Episode 6, Setrakian devised a new plan to save the world, after realizing that beheading every single vampire one by one might make great television, but isn’t exactly all that practical. His new plan, with Ephraim and Nora now by his side, is to hunt down and kill ‘The Master,’ convinced that doing so will also kill all of his vampire offspring.

Like the past couple weeks, we learned more information about Setrakian’s history with Eichorst, with several internment camp flashback scenes interrupting the present day action. Upon discovering that a young Setrakian was a skilled woodworker, thanks to skills passed down from his father, Eichorst pulled him off his regular duties and commissioned him to create a special item, taunting him every step of the way.

Though it wasn’t immediately clear what Eichorst had Setrakian make, we learned toward the end of the episode that it was The Master’s giant coffin, which we of course saw in the very first episode of the show. I’m loving the history that’s slowly being built up between those two characters, and learning more about their decades-spanning relationship has proven to be one of the most engaging aspects of The Strain.

Again, Eichorst is such a deliciously evil character and Sammel is absolutely terrific in the role, with his performance being another big delight of the show. Eichorst is essentially Hans Landa, as a vampire, and Sammel plays both his Nazi side and vampire side with frightening conviction. It’s hard not to think of Christoph Waltz’s performance in Inglourious Basterds whenever Sammel is on screen, and I don’t think you need me to explain how favorable of a comparison that is.

Using Jim as bait, Ephraim, Nora and Setrakian began to carry out their plan of finding The Master, setting up a meeting between Eichorst and Jim, with the hopes of Eichorst leading them to the head honcho. Of course, Eichorst being way too smart for that kind of nonsense, the plan didn’t exactly work out, and Setrakian almost lost his life in the process.

Goodweather saved the Jewish badass mere moments before Eirchorst dispatched him, with Eichorst sparing him ‘for services rendered’ – thus, the title of the episode. Definitely got the sense in that moment that Eichorst just plain didn’t want to kill Setrakian, which only adds to their comic book-style Joker/Batman story. After all, what fun would it be for Eichorst, if he could no longer torment his greatest adversary?

As for Gus, he’s still locked up in jail with his infected friend, unable to convince anyone that terrible shit is going down in the city. If you’re annoyed by the all-too-familiar trope of characters not believing things that are staring them right in the face, then it’s likely that you’ve been pretty annoyed with the last couple episodes, as that’s becoming a recurring theme across the board. It’s annoying, for sure, but I suppose it’s to be expected.

In the episode’s utterly badass final scene, the Luss children, the family housekeeper and the housekeeper’s daughter arrived at the Luss home, intent on finding out what’s been going on with Joan. After discovering her husband dead on the floor, a monstrous Joan went on the attack, and all four soon-to-be-victims were saved at the last minute by some sort of vampire hero dude – well, the housekeeper’s daughter wasn’t so lucky, as she was infected and had to be put down.

I haven’t read The Strain books so I have no idea who this guy is, but holy shit he’s kinda sorta already one of the most badass characters in TV history. Flanked by an army of fellow mercenaries, he appears to be a vampire that’s not exactly down with other vampires, and I’m very interested to see how things play out with him. One of the strong suits of the show is a handful of great characters, and this dude looks to be another fine addition to the pack.

We’re now more than halfway through the first season of The Strain and I’m really enjoying the direction the show is headed. So far, it’s been nothing less than entertaining each and every week, chock full of some pretty fun monster action as well as characters worth spending an hour each week with. Can’t ask for much more than that.