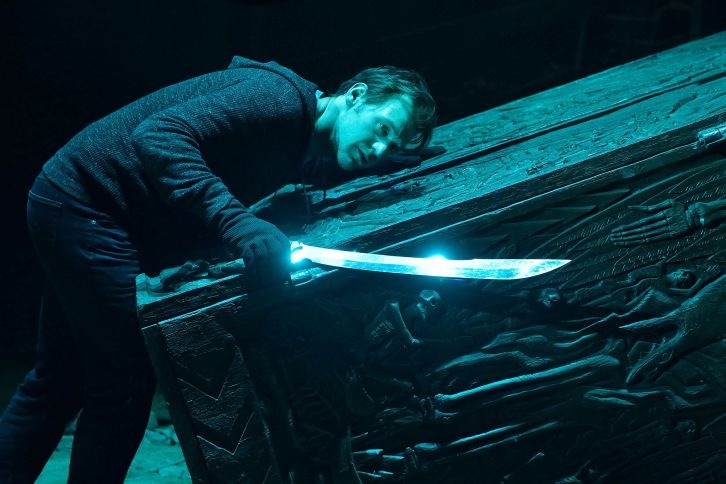 If Universal Studios’ Halloween Horror Nights has an attraction themed after The Strain next year, I’m willing to bet it’ll be largely based on this past Sunday night’s eleventh episode, which finally took the main characters down into the subway tunnels and put Eph face-to-face with The Master.

Horror was primarily the name of the game in ‘The Third Rail,’ an episode that took a few pages out of The Walking Dead‘s playbook and managed to be more genuinely suspenseful than the show has perhaps ever been. We are in the midst of the vampire apocalypse, and that was very much felt in The Strain‘s latest hour.

Three different stories were the focus of ‘The Third Rail,’ one of which saw young Zack fully embodying the role of The Strain‘s version of Carl Grimes. While Eph, Setrakian, Nora and Vasiliy went on a hunt for The Master, Zack was left in the pawn shop to babysit Nora’s delusional mother, a decision that ensured Eph won’t be winning any ‘Daddy of the Year’ awards.

After running out of cigarettes, Nora’s mom went crazy and demanded more, leading Zack to make the life-endangering decision of heading outside the confines of the pawn shop and tracking down a few more packs of cancer sticks. Zack’s journey led him to a ransacked convenience store, where he almost became vampire food.

Hiding out in the store’s basement after being spooked by two twenty-something looters, Zack managed to evade the vampire’s grasp in a suspenseful scene, but the young couple wasn’t so lucky. Off-screen, both met presumably gruesome ends, and Zack was able to escape and head back to the safety of the pawn shop.

During the scene, Zack briefly crossed paths with an axe-wielding Gus, who made his return to the show this week. Escaping the confines of police custody a couple weeks back, Gus went back home to find that his brother had become infected, forcing him to kill yet another loved one. A baseball bat in the mouth was the method of destruction, Gus using the bat’s leverage to snap his brother’s neck.

His mother nowhere in sight, Gus placed a few frantic phone calls before eventually discovering her in the closet, writhing in pain and clearly in the throes of a vampire transformation. Gus apologized to his mom and couldn’t bring himself to dispatch her, though he took a whole lot of pleasure in using a fire axe to cut his landlord’s head clean off.

The highlight of the episode was the pursuit of The Master, which took place down in the creepy abandoned subway tunnels. Armed with UV lights, swords and various other weapons, Eph, Setrakian, Nora and Vasiliy headed into the vampire-infested tunnels, the sequences down there nailing the genre classification of the show.

At one point, the gang came upon a dozen or so nesting vampires, having to walk past them without sounding the proverbial alarm clock. Killing the vamps as they slept would alert The Master to their presence, so they were forced to leave them be, and head deeper into the lair.

Taking a turn for The Descent, they soon found their way to a narrow tunnel, which was about the size of a human body. Of course, they had to pass through the tunnel to get to the other side, and the journey made for some claustrophobia-inducing action – particularly when Vasiliy went through, with a vampire in hot pursuit.

One of the things I haven’t been a huge fan of about The Strain has been the look of the vampires, which oftentimes has been more goofy than scary. In this episode, they seem to have matured a bit and passed through that awkward just-infected stage, looking a whole lot more like monsters than what we’ve seen in past weeks. As they become more vampire and less human, I expect the show’s vamps to only get scarier.

If Zack is Carl than that of course makes Eph the show’s Rick Grimes, and it was hard not to make the comparison when he began hearing the disembodied voice of his dead wife. As it turns out, it wasn’t delusion but rather The Master’s trickery, and Eph finally met the show’s lead villain toward the end of the episode.

Grabbing him by his throat and threatening to destroy everyone and everything he loves – including Zack – the awesomely corny-looking Master hoisted Eph up into the air and nearly strangled the life out of him. Just as Setrakian was about to make an attempt at killing him, Vasiliy tossed a UV light bomb at The Master’s feet, sending him off into the tunnels and rendering his minions immobile.

Pissed off that he was so close to killing him before he got away, Setrakian took out his anger on The Master’s coffin, destroying his own creation with a sledgehammer. The gang then discovered that hundreds of vampires were nesting in another area of the tunnels, setting up a final two episodes that are sure to be full of decapitations and vampire insanity.

While I wouldn’t put it on the same level (at least not yet), The Strain has proven itself to be an adequate Sunday night filler while we wait for The Walking Dead‘s return, and ‘The Third Rail’ was all around another solid episode of the show. The vampires and situations are getting scarier and the action heating up, which should make the next two Sunday nights a whole lot of fun.

In next week’s second-to-last episode, Nazi vampire Eichorst and rocker Gabriel Bolivar come back in the fold, and we FINALLY learn more about the utterly badass Quinlan!