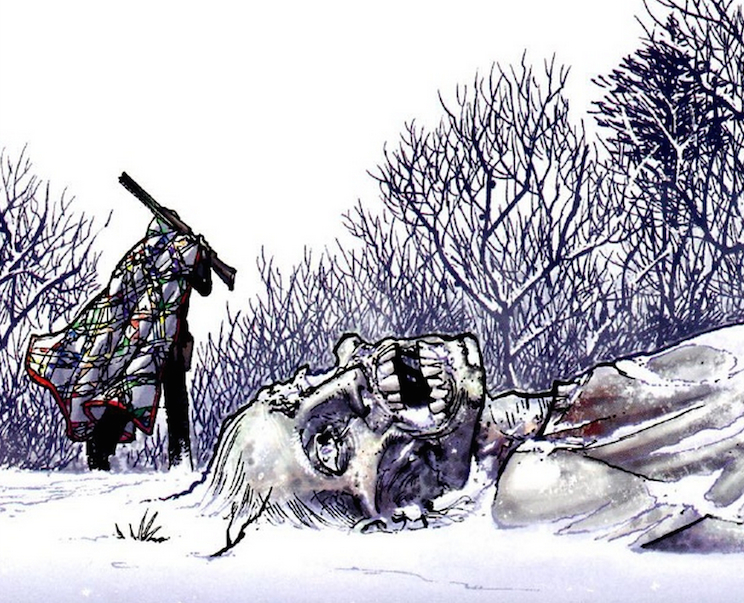 I love the TV show and what they have managed to create but when I think of The Walking Dead I think of the comic book first and probably always will.

I’ve followed it from the beginning and despite the occasional bump in the road it remains an unmissable and truly unique publication where anything can, and normally does, happen. It’s frequently uncomfortable and sometimes even upsetting, but it’s this gut-wrenching excess that makes The Walking Dead stand out from the Zombie crowd.

At any given moment you can turn to a page that makes you feel like punching the air in delight then the following issue you have to witness characters you have come to care about and respect get brutally and mercilessly wiped from existence. This isn’t the Marvel universe, these heroes and brave individuals aren’t going to triumphantly return at some point in the future, they are gone for good and it can happen to any one of them in an instant.

In these articles I’m going revisit the series from the very start and attempt to select the genuinely crucial, pivotal and most significant moments from every issue released thus far. These are the moments that shaped the lives of the characters, moved the story forward into darker places and made The Walking Dead the most essential comic book of this generation.

Part 1 can be found here. We pick up the story as the survivors attempt to recover from the first concentrated zombie attack they have had to face since they all came together. 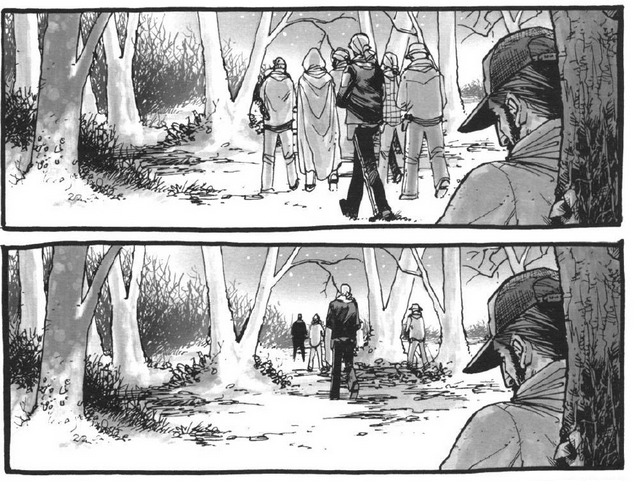 As the survivors deal with the emotional aftermath of the zombie attack on the camp it is revealed that Jim, a quiet and uncommunicative member of the group, has sustained a nasty arm injury during the incident. At first he reassures the others that he feels fine and optimistically considers the possibility that he has escaped infection but it soon becomes clear that his health is deteriorating and a tough decision will need to be made before he changes.

Jim requests that the group take him closer to Atlanta and leave him there to await his death and reanimation into a zombie. He does this in the hope he will eventually be reunited with his undead family who may still exist within the city. 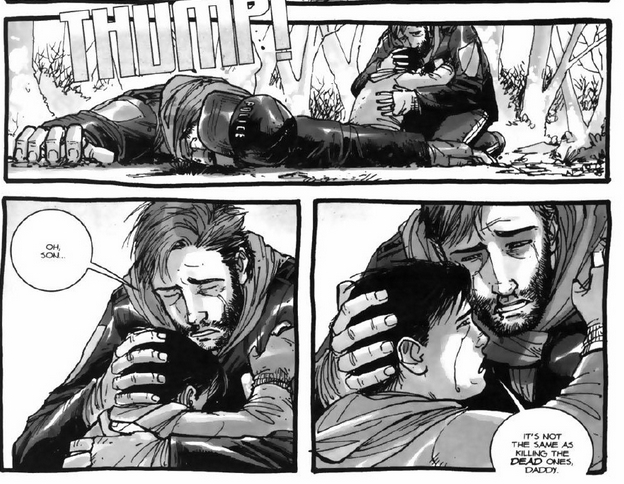 In the days leading up to the zombie attack on the camp, Rick had been keen for the survivors to pack up and move on, a suggestion his friend and ex-partner in the police force Shane, had dismissed believing it would be better to stay put and wait for military help. This decision combined with his ongoing secret feelings for Rick’s wife Lori, leads to a physical confrontation between the two after which Shane finally snaps and angrily storms off into nearby woodland closely followed by a confused Rick.

When the two come face to face away from the others, Shane points his gun at Rick and starts to become overwhelmed with emotion and frustration, explaining to Rick that his sudden return has left him with nothing and he (Rick) wasn’t meant to wake up from his coma. Just as it seems Shane is about to fire, Rick’s young son Carl appears and shoots Shane through the neck causing him to die of blood loss moments later.

The Survivors Leave The Camp – Issue 7. 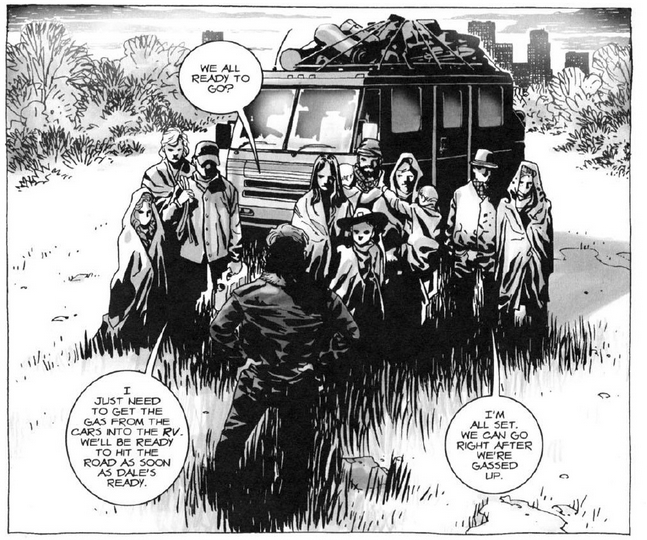 After Shane is buried, Dale informs Rick that they all desperately need a leader, someone to follow and trust. Rick takes on the responsibility and swiftly decides they need to leave the camp site and find somewhere safer to live. Everything is packed into the RV and they depart the area, driving toward an uncertain future. 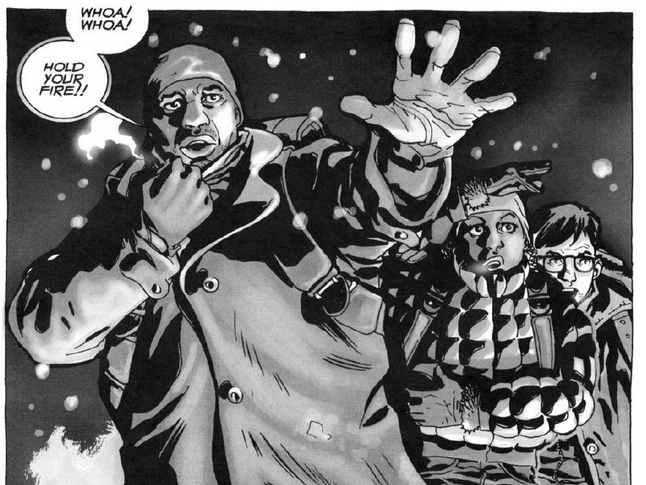 A few hours into their journey the survivors are forced to stop and move several abandoned cars that are blocking the road. As they are preparing to drive away Rick is startled by some movement which instead of being zombies turns out to be a man called Tyreese, his daughter Julie and her boyfriend Chris.

Tyreese is short tempered but honourable and trustworthy. He quickly bonds with Rick and would become an important member of the group due to his strength and courage.

Lori Reveals She Is Pregnant – Issue 7. 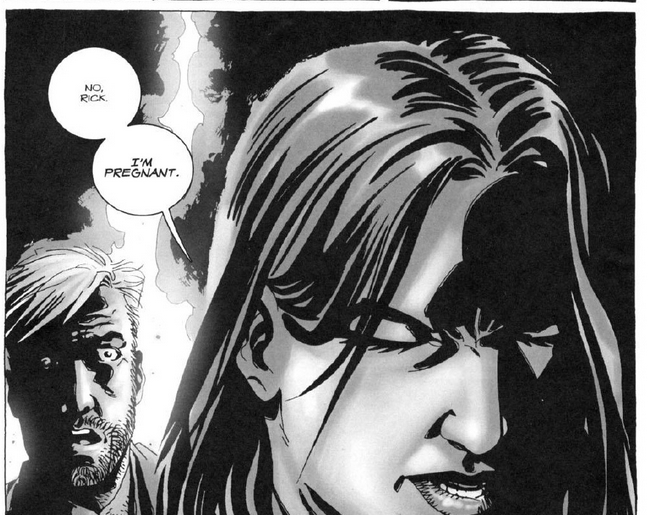 The following evening the whole group sit down to eat around a camp fire and everyone thanks Glenn for the food that was scavenged during his regular trips into zombie infested Atlanta City. Rick leaves the others after noticing Lori has silently walked away, when he asks her what’s wrong she reveals that she is pregnant.

Rick is pleased with the news but remains blissfully unaware that he potentially isn’t the father. 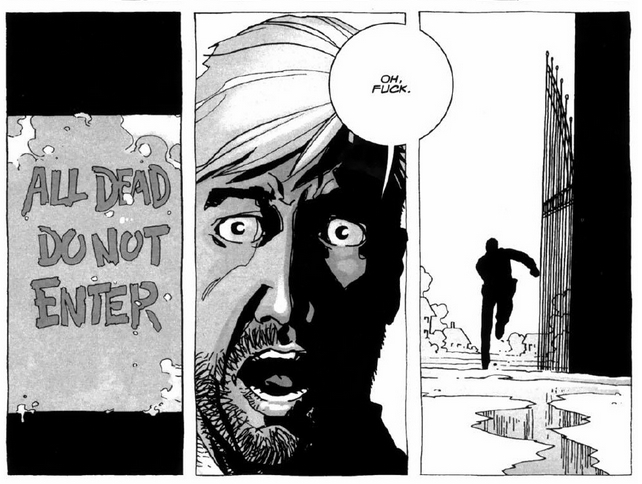 As the road journey continues so does the bad weather meaning progress is slow. Abandoned buildings come and go but nothing is suitable for providing the protection the group desperately needs, then twenty miles from the city they finally spot a small group of houses that are surrounded by a high wall and secure metal gates. Rick is excited by the discovery and after he and Tyreese clear a house that had several zombies trapped in the basement, everyone settles down for the night looking forward to investigating the rest of the properties the following morning.

When Rick returns to the RV to collect some items he notices a previously obscured sign warning any visitors that the zombie presence within the houses is far worse than they could’ve ever imagined. A desperate battle for survival begins during which group member Donna is killed, the others fight their way back to the RV and escape by ploughing through multiple zombies and the entrance gate. 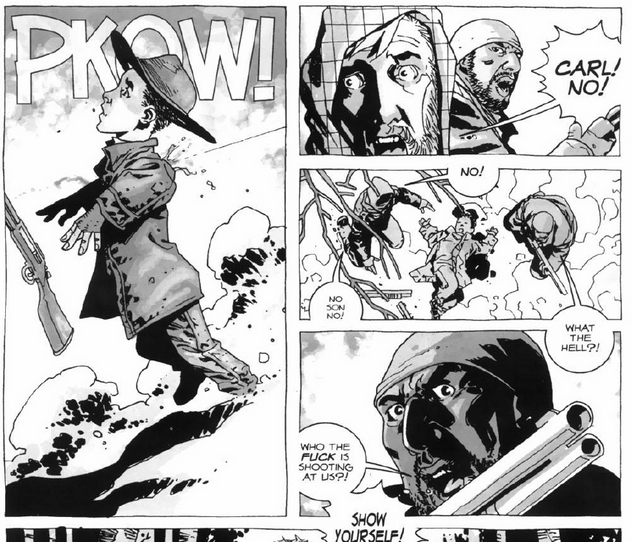 With food supplies becoming dangerously low Rick decides to go hunting with Tyreese and allows an excited Carl to tag along. Shortly after they depart Rick hears some movement ahead of them and before he can react a shot is fired which hits Carl in the back.

A shocked and apologetic man named Otis emerges from the trees and tries to explain that he mistook them for zombies but an understandably enraged Rick isn’t interested in excuses and prepares to shoot Otis in retaliation for what he has done. 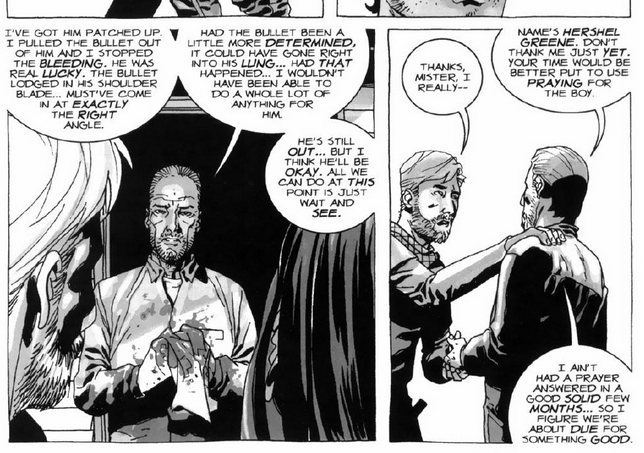 As Rick’s anger subsides, Otis informs him he has been staying at a nearby farm owned by a man called Hershel Greene who could possibly treat Carl’s injury. When they get there Hershel successfully removes the bullet and stops the bleeding.