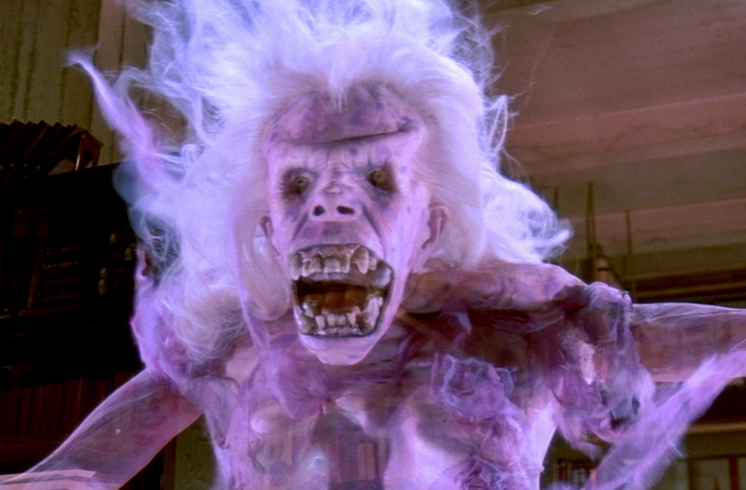 I’ve noticed in recent years that I seem to have become less susceptible to a good jump scare which is either due to the poor quality of the scares or simply because I’m getting older. They still catch me off guard from time to time but when you watch as much horror as I do there are a million little warning signs you start to pick up on which enables you to see them coming. I tend to ‘twitch’ these days … rather than jump.

This means the jumps I remember the most are the ones that ‘got me’ in my younger days, which has the added side effect of them being forever imprinted on my youthful mind. They stay with me (if that makes sense?), and each time I watch one of the movies they are included in I get a little chill and still await the moment slightly on edge.

I must have watched Aliens a hundred times but still feel a tiny surge of anxiety each time Paul Reiser puts his face stupidly close to the glass.

The Sixth Sense features several very cool and very clever little scares, the best of which is probably this ankle grabbing moment toward the end of the movie.

And let’s be honest, who wouldn’t be terrified to suddenly discover Mischa Barton under their bed holding a strange little box and constantly vomiting!

Dick Hallorann’s heroic return to the Overlook Hotel must come close to being the biggest waste of time in cinema history. If you want a bowl of ice cream then he’s your man, if you need him to swoop in save your life … Forget about it!

You have to feel sorry for Dallas. He’s alone, surrounded by darkness, totally disorientated and to make matters EVEN worse he has to deal with Lambert screaming and sobbing into his ear piece like a child when focussed and swift advice would have undoubtedly been far more useful.

Ridley Scott builds the tension brilliantly in this scene and despite being able to tell something bad is on the verge of happening, the moment you see the Alien suddenly emerge from the shadows with its arms outstretched still hits you like a bolt of lightning!

I watched Deep Blue Sea in the cinema about two days after it was released with my best friend Jim. Now, Jim is a big fella’ … over the years he has worked as a debt collector, nightclub bouncer and at the time was a department store security guard. He’s a lovely bloke but tough as they come and not easily spooked by anything.

None of that mattered the moment a shark launched itself out of the water and grabbed Samuel L. Jackson during his motivational speech. Jimbo SCREAMED like a girl, dropped his jumbo-size popcorn on the floor and I swear all 18 stone of him left his seat by a clear six inches. I wish I could say I was more of a man about it but I was left clutching my chest and repeating the word “FUCK” over and over for about ten seconds.

I’m not a big fan of found footage but the original REC is a personal favourite and remains a very solid horror movie. The first time I watched it I was actually doing well and had only squirmed in my chair a couple of times, then just before the climax of the film that IDIOT Pablo decides to check out the attic by holding his camera up and slowly starts to pan around.

Luckily Hooper was wearing a wetsuit which is always useful when you suddenly shit yourself!

If anyone deserved a rest at the end of a horror movie it was Alice. Her vacation to Camp Crystal Lake had been a less than pleasant experience and by the time she found herself floating gently in a canoe both she AND the viewers were understandably drained and in need of a moment to relax and enjoy the scenery …

Jason had other ideas. He explodes from the water, grabs our heroine and a horror movie legend was born.

My first ever cinema-going jump scare and I can’t think of a better one to have earn that honour. The whole scene in the library is just perfect, it nicely introduces you to the characters, gives you an idea of the subtle and clever comedy involved and most of all it features a very cool ghost with a classic, creepy look.

When the jump arrives half of you is scared and the other half is laughing … Movie magic!

My number one choice was easy. No moment in a movie has ever made me jump more than this classic scare from the very underrated Exorcist 3.

The camera doesn’t move and viewers have to endure over two minutes of watching the nurse calmly walk from room to room, you KNOW something bad is on the way, you just don’t know what it will be or how it will go down. Then just when your nerves can’t take much more, BAM! … They zoom in at speed to reveal a figure dressed in white robes striding toward the nurse from behind, carrying an insanely large pair of surgical shears.

Screeching music assaults your eardrums and you are left shaking, confused and totally drained.