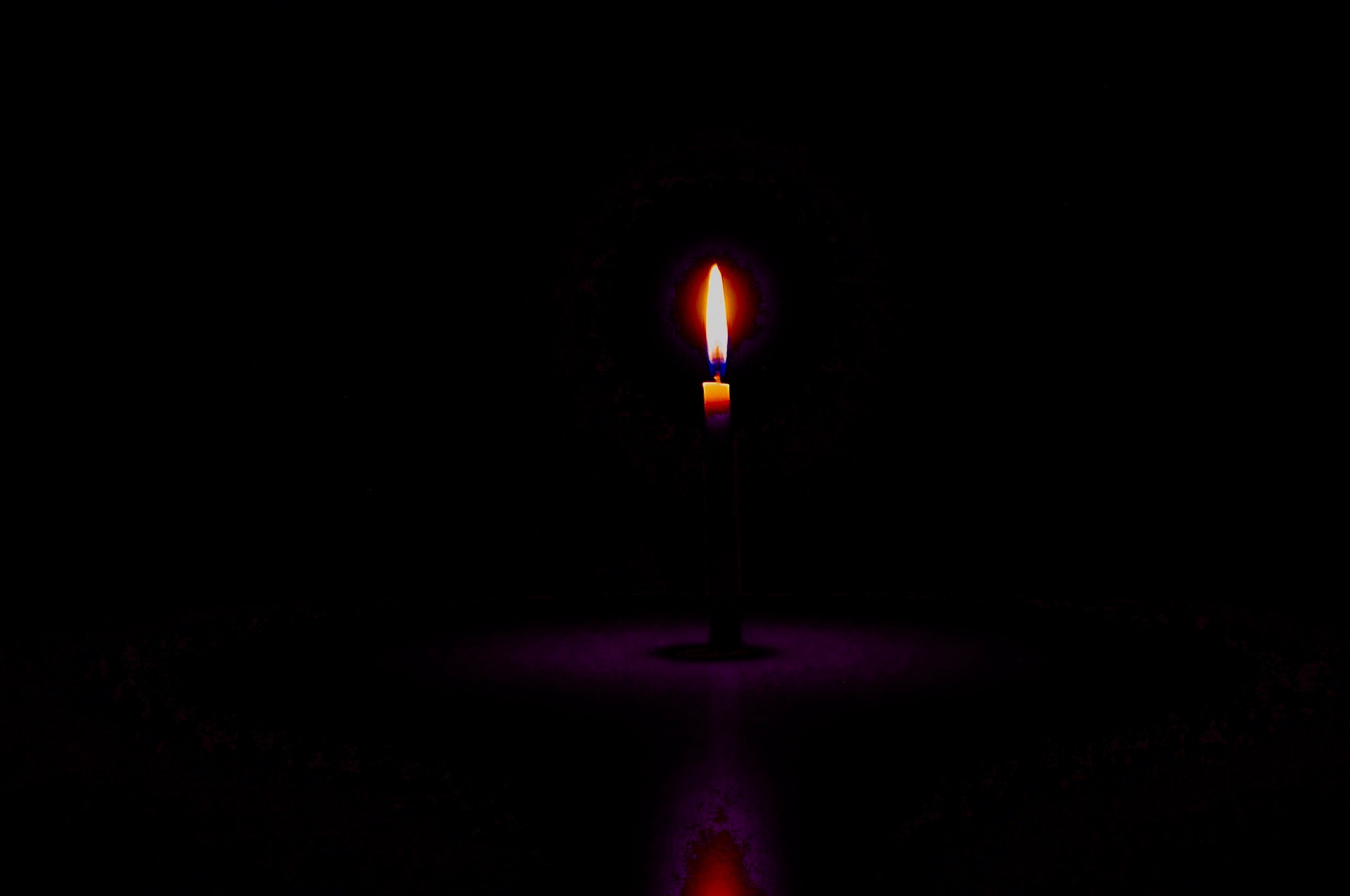 Jory hums a pleasant tune as he washes his hands. The white tiled walls of the embalming room reverberate his sonorous voice like a concert hall. Behind him, Peter’s body lies prone on a metal table.

Still humming to himself, Jory dries his hands and sets to work. He shaves the back of Peter’s head, then measures and draws a three-by-three inch square onto it.

Jory dons a leather apron, a face mask, goggles, rubber gloves, and ear muffs. Then he pulls out a bulky, handheld saw with a small circular blade. He clicks a pedal with his foot and the saw roars to life. In that small, tiled room the saw makes a horrible screech as he traces the square with his blade.

Using a screw driver, he pries off the square piece of scalp-and-bone, and sets it aside on the table.

From his vast array of shining tools, Jory selects an ordinary spoon and begins scooping the brains from poor Peter’s head and dumping them into a metal bowl.

“But come ye back when summer’s in the meadow…”

Soon the bowl is full, and Peter’s head is empty. Jory then affixes tiny hinges to the square piece of skull he’d set aside. And, as careful as a clockmaker, he attaches the hinged bone back onto the skull, thus making a tiny door in the back of Peter’s head. He adds a small latch and door handle.

With much huffing and puffing, Peter’s body is moved to a chair on the opposite side of the room. His body is positioned so that it looks as if Peter were lounging, save for the armature and clamps holding his head up straight.

Jory stoops down, opens again the little door on the back of Peter’s head, and places a tea candle inside.

Jory stands, stretches his arms into the air, and sighs heavily. It’s high time for a break. He pulls a small clay pipe from his pocket, packs it, lights it, and puffs on it as he paces around the room absentmindedly.

He stops when he finds himself before dead Peter’s blank gaze. Peter’s eyes seem to have sunken further into his head. Otherwise, Peter is, or was, a handsome young man. A farm boy. Still dressed in the pajamas he was in when the flu took him. Like so many others.

Jory taps the ash from his pipe, loads it once more, and lights it. He draws in the smoke, lets it fall from his mouth. He reflects on the unexpected turns his life has taken. How had he, an apprentice furniture maker, wound up making a living bringing the dead back to life?

It all started, he supposes, with the Spanish Flu. Suddenly, no one was interested in buying armoires or dinner tables. Caskets was where the money was at. So he made those instead, and found it extremely lucrative.

But he wanted more. “In America, you must strike while the iron is hot!” his father had always told him. This was his chance to make it big. The flu wouldn’t last forever.

So Jory took a loan out on a funeral parlor where he held funeral services, sold caskets, tombstones, urns. He bought plots of land that he converted to cemeteries and installed a crematorium on the premises.

He racked his brain on how he might squeeze yet more money from the grieving living. He bought a camera and sold postmortem photographs. Eventually he began circling around the Occult. Séances. Spiritual Mediums. Worshiping of strange gods.

And then, most recently, he found something else entirely, something on a whole new level of strange…

The pipe is done. Nothing but ash in its bowl. Yet Jory is reluctant to move on from his break. This next part still frightens him.

He looks over to the small white cabinet. He can see the flickering light coming from the edges of the door. He pockets the pipe, takes a deep breath, and goes to the cabinet and opens it.

Inside, there is a candle. The flame is oddly iridescent, like the wings of an insect, or the full moon through clouds. And it pulsates, as if alive, on top of a thin black candle. “Hell’s Fire“, he’d heard it called.

Gently, carefully, Jory reaches in and grabs hold of the candle, its wax oddly warm and flesh-like. He turns with it slowly, walks gingerly towards the back of Peter’s head. Closer, closer. Jory tilts the black candle through the small door in the back of Peter’s skull, and lights the tea candle–

And Peter immediately shifts. His hands squeeze the armchair, his feet slide on the tile as he attempts to stand up. His eyes are open; you can see the flickering of the candle through his pupils.

Jory closes Peter’s door and latches it. Then he frees Peter from the clamps–and Peter stands. He lives again!

But no. Jory knows this is not really Peter. All that was Peter, all his memories, and of all his personality are now nothing but the pink sludge in that metal bowl.

Side-by-side, Jory and Peter’s body walk out from the embalming room, down the hallway and through the gallery of postmortem pictures, past the display of urns, past the tombstones, and down the grand staircase into the lobby where Peter’s family anxiously waits.

There is a collective gasp when they see him. A shriek. Someone faints and no one thinks to catch them.

“I deadass just saw something blinking up there,” says Kayla. She shines her flashlight up the rotting grand staircase.

“Woah, look over here,” says Ethan shining his light onto the lobby wall. It is covered with layers of spray painted graffiti, “That says 92, as in 1992! This shit belongs in a museum!”

“Bro. I’m deadass about the lights,” says Kayla, “Someone’s up there.”

Matt and Ethan walk over to where Kayla is standing at the foot of the staircase. They shine their flashlights up the stairs.

Kayla turns her flashlight off. Then Matt.

“God damn it,” says Ethan, and he shuts his light off too.

It is utterly dark.

“Wait. Don’t do anything,” Matt says, “Let your eyes adjust.”

“Why are you whispering?” says Ethan.

Sure enough, there is a pale flickering on the walls and ceiling. As if a TV is on in another room.

All three turn their lights back on.

But Kayla and Matt are already making their way up the broken stairs.

“Maybe it’s some other kids,” says Kayla, “It’s Halloween, right? Not like anyone can do parties without being fucking castigated.”

“Maybe it’s some old dude whacking off to an iPhone,” says Ethan.

At the top of the stairs, they look around. A hallway with wallpaper peeling off the walls in sheets. Doors to empty rooms. Nothing that points to a light source.

They turn their lights off again and after a moment they are able to dimly see each other’s faces flickering in and out of the blackness.

A pinpoint of iridescent light shines through. Matt walks up to it, pokes his finger through the torn wallpaper and crumbling plaster. The three of them begin tearing through the false wall until they can step into the other side.

On the other side is a dingy white room with tile walls.

The light is shining out from the edges of a partially ajar cupboard. Kayla walks up to it, opens the door, and bathes the room in pulsating opal light.

“It’s beautiful,” she says. She reaches in to hold the candle.

Just then, Matt opens another cabinet and a shelf breaks, sending a dozen corked glass bottles crashing on the floor. Kayla drops the candle and it lands on the ground, instantly igniting the spilled embalming chemicals in a sudden “WHOOOSH!”

Matt screams. His legs are fully engulfed as he runs out of the room and drops and rolls on the floor of the hallway.

Kayla jumps over the flames and flies down the stairs and out the front door, where she finds Ethan already there, panting.

But the house is rapidly becoming consumed by fire. Fire that dances like an aurora borealis, and shimmers and undulates like jellyfish.

Ethan and Kayla back away from the terrible heat of it. They run to Kayla’s car, and Kayla turns back once more.

A figure walks out the burning front door of the old abandoned funeral parlor. It walks calmly toward Ethan and Kayla. But as it gets closer they see the charred meat of its torso. The blackened bones of its legs. And eyes that flicker like flame. And still it walks towards them.

…The strange fire grows taller and hotter, and the surrounding trees are starting to catch…