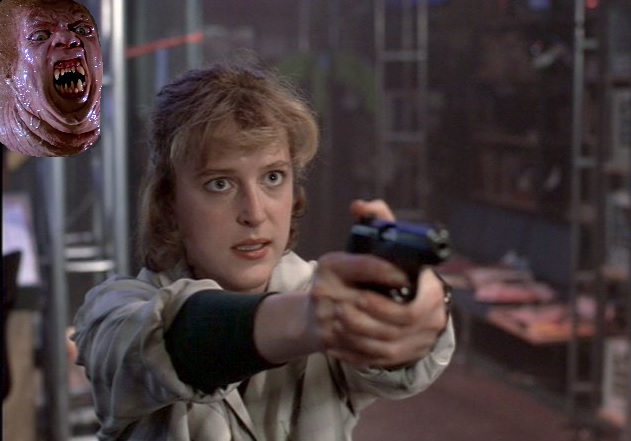 There are few stories that have been more influential on the horror genre than John W. Campbell’s novella Who Goes There?, first published in 1938. The story has been adapted into several feature films over the years, the first of which was 1951’s The Thing from Another World.

In 1982, John Carpenter made his own gruesome adaptation of the novella, simply titled The Thing, and in between those two films came Horror Express, in 1972. And then there was of course 2011’s same-named prequel to The Thing, which was in many ways a remake of Carpenter’s film.

The novella got a small screen adaptation in 1993, Campbell’s story serving as the inspiration for an episode of classic sci-fi series The X-Files. Titled ‘Ice,’ the episode premiered on November 5th of that year, and it was the eighth episode of the show’s very first season.

A standalone tale that was primarily set in one location, ‘Ice’ begins with the suicides of the two remaining survivors at an Alaskan outpost, in the wake of something infiltrating their research facility. “We’re not who we are,” one man repeats, before blowing his own brains out.

Along with three other researchers and a necessary pilot, Mulder and Scully head to the outpost in search of answers, and it is there that they discover a rabid dog. With a bite to the pilot’s arm, the infection is spread, and the team soon realizes that a worm-like parasite is using warm bodies as its host.

As we come to find out, the previous group of researchers had mistakenly dug an ancient organism out of the arctic ice, which is now roaming free within the confines of the outpost. As the bodies pile up, panic and paranoia spreads within the group, as nobody is sure who is really who they appear to be.

Even if you only read that plot description, it’s clear that ‘Ice’ is an intended homage to Carpenter’s The Thing, and indeed it is a real treat for fans of the film. The setting is a dead ringer for Outpost 31, both inside and out, and in fact exterior shots were lifted directly from the movie. As for the interior of the facility, it was designed by The Thing‘s production designer – no coincidence, I assure you.

The major difference between Carpenter’s version of Who Goes There? and the one seen on The X-Files is that ‘Ice’ isn’t a monster story, but rather one that solely focuses on the sense of fear and paranoia of the situation. The parasite in the episode is a relatively tiny worm, and rather than turning its hosts into ooey, gooey monsters, it instead infects them with a rabies-like disease, filling them with a desire to kill.

Fun Fact: One of the ill-fated men at the beginning of the episode is played by stuntman Ken Kirzinger, who went on to play Jason Voorhees in Freddy vs. Jason!

Often regarded as one of the finest hours of the show, ‘Ice’ has over the years garnered much acclaim for adding a new layer to the relationship between Mulder and Scully. In an unexpected and highly interesting twist, two members of the team at one point suspect that Mulder has been infected with the parasite, and in fact he spends the majority of the episode involuntarily quarantined in a separate room.

One moment in particular is a standout gem of the episode, wherein Mulder and Scully draw their guns and have a bit of a standoff. Though she’s pretty sure Mulder is still Mulder, she nevertheless agrees that he should be locked up until they can prove with absolute certainty that he’s not infected, showing a smarter side of the character than previous episodes had provided us with.

Toward the end of the episode, it is discovered that the introduction of a second worm parasite into an infected host body is the cure, and though it’s somewhat of a silly idea, it provides for the hour’s most intense moment. Believing that Mulder is infected, one of the researchers wants to insert one of the worms into his ear, intent on curing him of the infection that we, by that point in time, are well aware that he doesn’t even have.

The other interesting thing about the episode is that there’s really no resolution, nor can the ending be considered a happy one. Though Mulder, Scully and two others survive the ordeal and return home, Mulder notes that there are still more parasites buried out there in the ice, and Scully urges him to forget about it and leave them there. The show never returns to the storyline, giving the episode a creepy finale that echoes The Thing from Another World‘s iconic final line: ‘Keep watching the skies.’

All in all, ‘Ice’ is a wonderful companion piece to The Thing, allowing for the very human sense of paranoia to take center stage, rather than mind-blowing monster effects. Best of all, it still holds up as an entertaining and intense watch, over 20 years later.