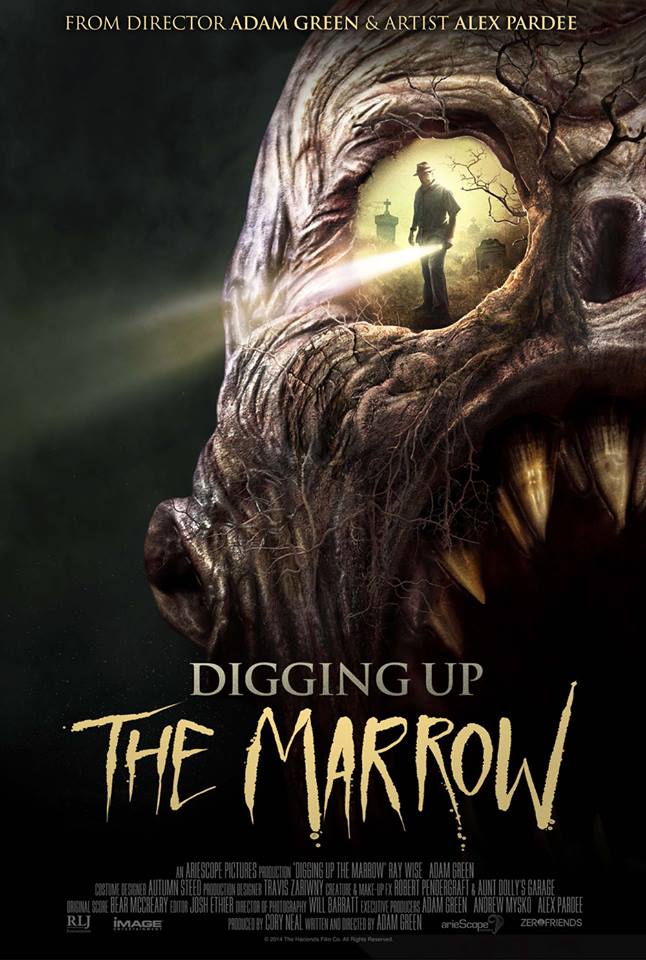 If there’s any filmmaker currently working within the confines of the horror genre who is most worthy of being referred to as ‘one of us,’ it’s without question Adam Green. A hardcore fan through and through, Green has done nothing but impress since coming onto the scene with 2006’s Hatchet, proving with follow-up films Spiral and Frozen that he can do more than make us laugh.

Green also created the series Holliston, the world’s first sitcom tailor made for those of us who, like its creator, live and breathe the horror genre. And then there’s the anthology film Chillerama, as well as countless shorts he and his company ArieScope Pictures have churned out over the years. Green has built up a loyal fanbase all along the way, and that’s simply because he knows how to entertain us.

His first feature film in five years, Digging Up the Marrow was written and directed by Green, and in fact it stars Green as himself. When the filmmaker receives a letter from a man who claims he can prove the existence of monsters, Green and his longtime cinematographer set out to make a documentary about the mysterious individual – convinced that he’s out of his mind, but ever-hopeful that he’s not.

That mysterious man is alleged former detective William Dekker (a phenomenal Ray Wise), who firmly believes that real-life monsters live underneath the surface of the earth. In his California hometown, Dekker says, is one of many entrances to what he refers to as ‘The Marrow,’ and he claims to have had several up close and personal encounters with the creatures that call the underground lair home.

There tends to be an element to Adam Green’s films that make them most accessible to his specific group of fans, as they’re often full of inside jokes and cameo appearances from his friends and colleagues. Digging Up the Marrow, perhaps more than any other movie he has yet made, is clearly targeted toward precisely that audience, as a large portion of the film might as well be called Adam Green: The Documentary.

Much like Holliston, Green plays a version of himself in Digging Up the Marrow, which takes us inside the ArieScope Pictures offices and even his home. I suppose one could criticize it for being somewhat of a self-serving commercial for Green’s career, as many have, though that’s kind of the fun of the film. For those who consider themselves fans, it’s a blast just hanging out with Green and his friends, and getting a glimpse into his life – however fictionalized it may be.

I think it goes without saying that Digging Up the Marrow is far from the first horror film about friends with cameras who head out into the woods to find monsters, though Green sets his entry in that particular sub-genre apart by creating an entire world that is absolutely fascinating to explore. That world brought to life by stories Dekker tells, it’s one that is both believable and full of mystery, and the film is at its best when that mystery level is high – and very little is actually seen.

Whereas most movies of this sort try to impart fear, Digging Up the Marrow‘s personality is one of childlike curiosity, with Green essentially playing the monster kid that lives inside all of us. Despite Dekker’s stories, which suggest that the monsters aren’t benevolent, Green is never anything but excited about encountering them, like a kid who’s afraid of a monster being under his bed but yet secretly wants one to be there. It’s a feeling he imparts with the film, tapping into that curiosity in a way that will make you feel like a kid again.

While Digging Up the Marrow‘s strongest suit is the air of intrigue it effectively builds up in the first hour, its weakest is the somewhat disappointing payoff. In the last 20 minutes, the film begins to feel like your run of the mill found footage movie – at least in comparison to everything that’s come before it – and without giving anything away, it’s hard not to be kind of bummed out when the ‘big reveal’ doesn’t live up to whatever your imagination had conjured up.

The monsters, smartly shrouded in secrecy for much of the film, were inspired by the unique artwork of Alex Pardee, who I’m a huge fan of. The problem is that once they’re actually seen, they don’t quite appear to exist in the same universe as the drawings Dekker had shown us, as they’re not nearly as wildly unique or fantastical as you’d expect or hope. There’s also not nearly enough of them, but we’ll chalk that up to personal taste.

Though the journey is more fun than the destination, it ultimately doesn’t really matter, as that journey is one that’s both fascinating and thoroughly entertaining. Like a ‘found footage’ episode of The X-Files, if Mulder and Scully were horror filmmakers, Digging Up the Marrow is more about the desire to find real-life monsters than it is the monsters themselves, and Green hits that particular ball right out of the park.

Ultimately, Digging Up the Marrow is further proof that Adam Green knows how to entertain his target audience, and it’s also the first real genre treat that 2015 has provided us with. So be sure to dig this bad boy up, when it hits VOD outlets on February 20th.