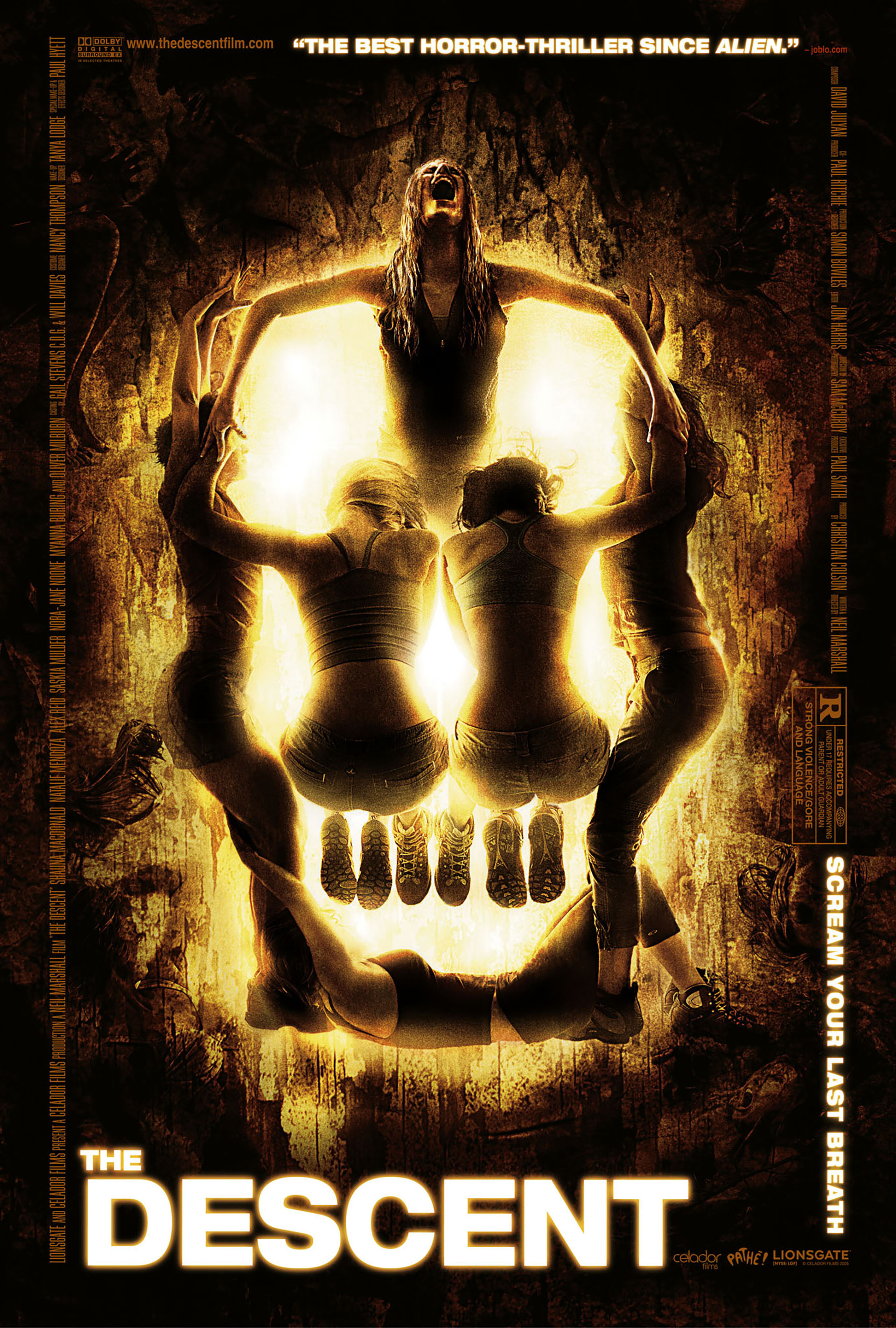 July 8th of 2005 marked the UK release of The Descent, a film that came to the states the following year. Neil Marshall’s British creature feature was a claustrophobic masterpiece that I still consider to be one of my favorite theatrical experiences, and as we near the film’s 10th anniversary, I wanted to take a look back at one of the great monster movies of our time.

So come along with me, won’t you?

Six women head deep into an uncharted cave system in The Descent, finding themselves terrorized not just by the daunting terrain but also by a band of bat-like monsters that dwell within. In order to survive, they’re forced to channel the monsters that reside within themselves, their survival instincts kicking into high gear for a life-and-death battle with the bloodthirsty and flesh-hungry creatures that call the cave home.

While often (accurately) described as a slow-burn, due to the fact that the ladies don’t come face to face with the monsters until right around the one hour mark, The Descent is nevertheless a movie that goes for the jugular right from the word go. Within the first few minutes, a brutal accident claims the lives of main character Sarah’s husband and her young daughter, the utterly shocking opening sequence coloring the subsequent 90 minutes with a grim tone that lets you know that nobody is safe, at any time.

From there, the film jumps ahead to one year later, when a traumatized Sarah reunites with her friends for another soon-to-be ill-fated adventure. Holing up in a cabin for the night, prior to the excursion, we get to know each of the six women, as Marshall understands that good horror is almost always synonymous with good characters. And it’s indeed those characters that help make The Descent a truly noteworthy piece of horror cinema, as the cast is comprised exclusively of strong, ‘final girl’ types.

Aside from the aforementioned opening scene, there are no male characters in the entirety of The Descent, an interesting choice that bucks horror movie conventions. Marshall, who had previously directed a nearly all-male cast in Dog Soldiers, has cited The Thing as being a big inspiration on the film, and it is in many ways his answer to Carpenter’s male-driven monster-piece. Strong female characters are not exactly the genre’s strongest suit, and Marshall admirably makes you forget that with The Descent‘s six leads.

The star of the show here is Shauna Macdonald, who portrays Sarah Carter. One of the great horror heroines of the past ten years, Sarah is perhaps the closest the genre has recently come to a modern day Ellen Ripley – a role the Scottish actress fully embraced for 2009’s unnecessary, Aliens-inspired sequel. Macdonald is fantastic as the film’s deeply traumatized final girl, and the character’s journey from terrified victim to empowered hero epitomizes what it means to be a female horror icon.

In contrast to the heroic Sarah, her friend Juno (Natalie Mendoza) is the film’s anti-villain, as we come to learn that she was not only having an affair with Sarah’s late husband (wonderfully set up in a blink-and-you’ll-miss-it moment during the opening scene), but has also led the gang into the cave under false pretenses. When Sarah discovers that she left one of the girls for dead, after accidentally stabbing her with a pick-axe, the conflict comes to a head in a revenge-fueled moment that adds a whole lot of depth to the proceedings – their side story making the film something more than your typical creature feature.

Like all the best horror films, The Descent has a whole lot more going for it than blood and beasts. I mentioned in the opening paragraph that seeing the film on the big screen was one of my favorite theatrical experiences and I say that mostly because of the claustrophobic nature of the proceedings, which made it a real delight to experience in a pitch-black theater. Before we even catch a glimpse of the monsters, The Descent is already terrifying, to the point that once they do arrive, they’re merely the icing on the proverbial cake.

A potent survival-horror film before anything much happens, the so-called ‘Crawlers’ kick the action and intensity up several notches when they finally make their presence known. Designed by Paul Hyett, the humanoid creatures are as fright-inducing as movie monsters get, striking with such quick and barbaric precision that they seem impossible to defeat. Modern horror movies aren’t exactly known for giving rise to original villains that can hang with the genre’s most iconic, but The Descent does precisely that – and reminds that practical monsters are the best monsters.

It’s impossible to talk about The Descent without touching upon the ending, which was infamously changed when the film was released in the states. In Marshall’s original ending, Sarah never escapes the cave, hallucinating a heartbreaking reunion with her daughter. In the version released in America and on home video, Sarah makes her way out of the cave, and instead hallucinates a vision of a dead Juno. The original ending is far superior and more authentic to everything that came before it, but happy endings allow room for sequels, and Lionsgate unfortunately chose to go that route.

No matter which version you choose to watch, The Descent is modern horror at its absolute finest, as effective now as it was ten years ago. There’s literally nothing you’d want from a horror movie that Marshall’s film doesn’t deliver in spades, whether you’re looking for a creepy setting, frightening monsters, brutal gore, intense action or characters that you can actually root for. It’s like Alien and Aliens all rolled into one, and it’s frankly one of the best horror films to come along in the past decade.

So happy 10th birthday, you nasty little Crawlers. I made a nice cake for you, but you’d probably prefer to just eat me. So go ahead. Take a bite. You’ve earned it.