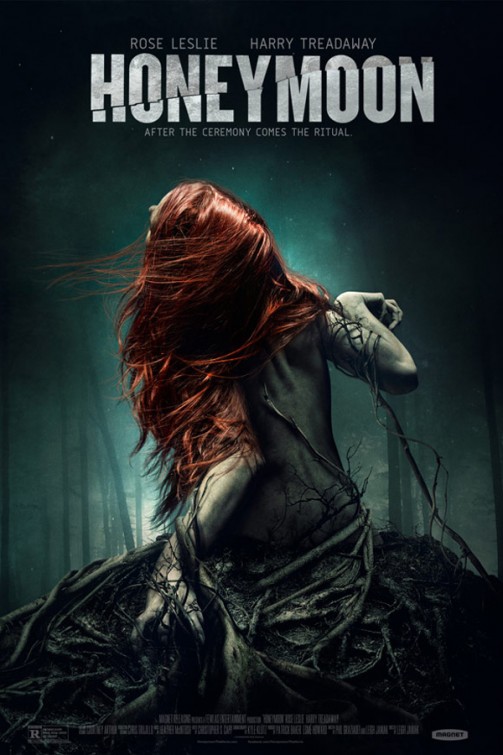 In 2012, Cabin in the Woods systematically deconstructed the ‘young people in a cabin’ sub-genre, imparting the message that enough is quite frankly enough, and it’s time for a change. Ever since then, it’s been hard to take movies of that sort seriously, though every once in a while a film comes along and reminds that not all cabin in the woods movies are created equal.

The debut feature film of Leigh Janiak, Honeymoon centers on newlywed couple Paul and Bea, who at the start of the film embark on a honeymoon to a remote cabin in the woods. Though everything is at first serene and romantic, a late night foray into the woods seems to turn Bea into an entirely different human being, leaving Paul to try and figure out what the hell is going on with his wife.

There’s a particularly memorable scene in The Evil Dead where Ash’s girlfriend is possessed by the evil force, though just as Ash is about to kill her, she transforms back into her former self – crying, she insists that Ash put down the gun, and the two young lovers embrace. Honeymoon takes that idea and expands it across 90-minutes, essentially making the film an art-house version of the horror classic.

Horror is only effective when you care about the characters and Honeymoon is aces in that department, as both the script and the performances ensure that you’re properly invested in this pair of newlyweds, before anything out of the ordinary starts to happen. Paul (Harry Treadaway) and Bea (Rose Leslie) have an almost childlike love for one another, their relationship epitomizing the passion that is an inherent aspect of young love.

It is because we care about the lovers that it’s impossible to not care when their marriage starts to go haywire, the film in many ways serving as a paranormal allegory for the dissipation of love that often occurs post-marriage. It’s as if their relationship is in fast forward in the wake of Bea’s strange incident in the woods, the passion almost immediately zapped out of the relationship and replaced by an invisible barrier between the two.

Like Ash Williams in that aforementioned scene from The Evil Dead, Paul desperately wants everything to go back to normal and even Bea seems to be fighting whatever is going on inside of her, and watching the two fall apart – due to conditions completely beyond their control – is effectively heartbreaking. Anyone who’s ever been in love surely knows that feeling of wanting to return to a happier time, when things aren’t going so great, and Janiak hits that particular nail right on the head.

Whether because of the low budget or by design, Honeymoon is wonderfully restrained, and for the majority of the runtime all questions are smartly left unanswered. Like Paul, and perhaps even Bea herself, we’re never quite sure what is going on, and as a result the film is consistently intriguing. It’s also restrained in the sense that there are no special effects or jump scares – rather it remains an intimate, character-driven horror film, the whole way through.

Too many filmmakers seem to think that loud noises and creepy-looking monsters are what scare us, but Janiak refreshingly understands that it’s the unknown that is truly terrifying. Paul’s battle with his wife’s degrading condition is unnerving because he genuinely has no idea what’s going on inside of the person he loves most, and that is an idea that is more horrifying than ghosts, goblins and harmless cats jumping out of the closet at precisely the right time could ever hope to be.

Like The Babadook, Honeymoon is yet another incredibly impressive debut feature from a female filmmaker, one that leaves you with the hope that Leigh Janiak continues exploring the deep, dark depths of the horror genre. She’s clearly got a keen eye for what makes a horror movie work, and so rarely do first-time films work as well as Honeymoon does.

Give this one a watch, next time you’re looking for a nice antidote to the crap Hollywood has become known for pumping out. Honeymoon is one of 2014’s best.