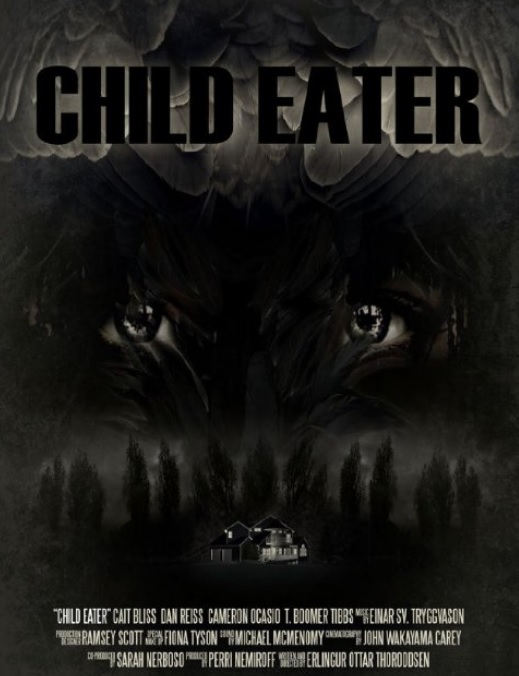 It’s not often that I fall in love with a movie based solely on the title. But there are exceptions to that rule. And when you title your movie Child Eater, you immediately become one of those exceptions.

Written and directed by Erlingur Thoroddsen, Child Eater hit the festival circuit last year, where it scooped up critical acclaim and creeped a whole lot of people out – the way that a movie about a monster that eats the eyes of children by all means should.

Yes, Child Eater is indeed about a legendary local figure named Robert Bowery, who keeps himself from going blind by consuming the eyes of children. A child’s worst under-the-bed nightmare come to life, the short film centers on a babysitter and her boyfriend, who discover that some legends are more than mere stories.

It’s hard enough to creep me out with a 90 minute film and even harder to do so on such limited time, but Child Eater manages to effectively deliver both chills and hair-raising thrills in just 14 minutes, putting a unique spin on the age-old tale of the Boogeyman, and playing out like a particularly creepy sequence from a James Wan film.

Simply put, Child Eater is the stuff that nightmares are made of, introducing a potential new horror icon while at the same time laying the groundwork for a much bigger story. It’s the latter aspect of the short that’s perhaps most impressive, as Thoroddsen sweeps you up in the atmosphere and mythology of his twisted bedtime story and leaves you wanting more.

We’ll talk about all of that more in a second, but first I invite you to check out the short film, and I encourage you to turn out all the lights and turn up the volume, before hitting the play button!

If you’re anything like me, the short film indeed did leave you wanting a whole lot more, and I’m happy to report that Child Eater is in the midst of being expanded into a feature film. But like so many projects that come along in this day and age, its evolution into a feature is all dependent on the support of us, the fans.

In the wake of Child Eater’s festival success, Thoroddsen has just started a Kickstarter fund for the project, looking to raise money for things like housing, equipment, food and transportation. The bulk of the film’s budget has already been raised, and so $15,000 is all that’s needed to ensure that Robert Bowery lives to kill again.

At the time of writing this, with 22 days still to go, over $2,000 has already been raised. Perks for helping to bring that total closer to the goal include set visits, executive producer credits, props from the film and even a special handmade cookbook, which is filled with recipes inspired by Robert Bowery’s taste for human eyeballs. Mmm. Eyeballs.

If the short film is any indication, Child Eater is going to be one horror film worth keeping an eye on, and a potential new addition to ‘Scariest Horror Films of all Time!!’ lists all over the internet. Considering what Thoroddsen was able to do with just 14 minutes, I for one can’t wait to see what he’s capable of with a full length film. A vision and a talent worth supporting, to say the least.

The Kickstarter fund comes to a close on April 18th, and you can learn more on the Child Eater website and Facebook page.