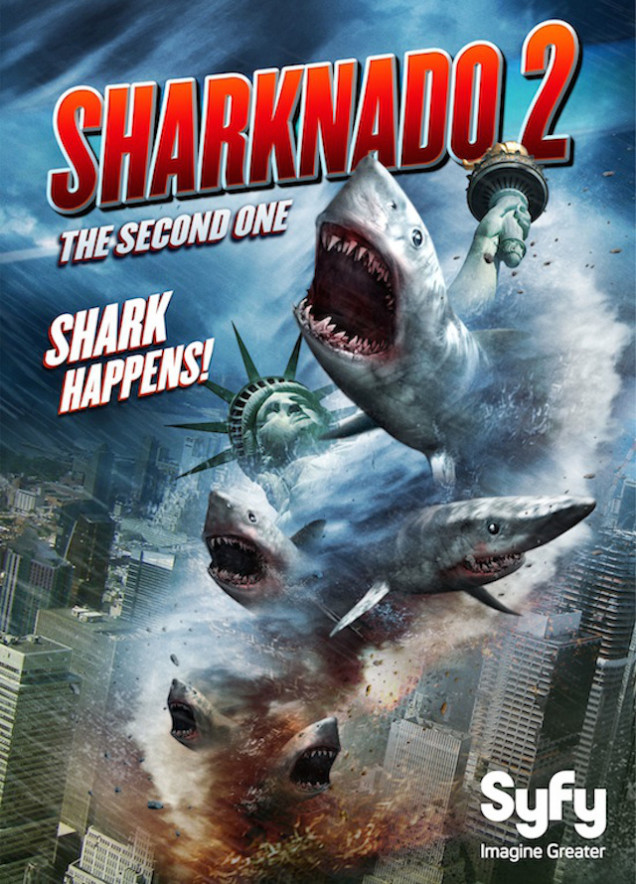 There are two kinds of horror fans in this world; those who can turn off their brains long enough to enjoy Syfy original movies, and those who refuse to back down on their stance that they’re the bane of the horror genre.

Never has this been clearer to me than last night, which of course marked the premiere of Sharknado 2: The Second One, kicking off the network’s first annual ‘Sharknado Week.’ My Twitter feed was cluttered with related tweets for the majority of the night, with those I follow either getting in on the hashtag fun or condemning those who were.

Yes, there was indeed a whole lot of what I like to refer to as ‘Sharknado Shaming’ going on across social media last night, the result of many horror fans feeling that the budding Syfy original franchise represents absolutely everything that’s wrong with the horror genre.

It wasn’t uncommon to see one fan looking down on another fan for live tweeting along with the film, and quite frankly I was surprised by all the vitriol that was being spewed. Do those angry horror fans have a point, or are they merely stiffly stiffersons that just don’t know how to have fun?

Well, since I see both sides of the coin here, I feel that’s a question I’m as equipped as anyone to answer. So with that said, it’s once again time for me to hop on the ole Halloween Love soapbox and speak my mind. After all, that’s what I’m here to do.

There’s no denying that Syfy original movies are crap, on many levels. The stories are as generic and repetitive as it gets, the CGI laughably bad and the acting atrocious. These aren’t opinions, these are facts.

Movies like Sharknado, Sharktopus and Mega Shark vs. Bill Cosby (not real, should be) are what I like to refer to as ‘Dumbsploitation’ films; they exploit the inherent dumbness of humanity, and humanity’s desire to see really, really, really DUMB SHIT.

Syfy has for years been carving out this dumb little niche in the world, and Sharknado is merely the pinnacle of the extreme dumbness they’ve been slowly building toward. As such, it should come as no surprise that Sharknado instantly become their most successful film to date; must I again remind you that the citizens of today are into DUMB FUCKING SHIT?

Sharknado and films like it are an exploitation of today’s silly cat video obsessed social media society, where stupidity reigns supreme and everyone’s trying to out-stupid everyone else. Intelligent humor has all but been replaced with idiotic memes that are shared around Facebook, and one quick trip through your cable lineup on any given night will reveal dozens of programs that are designed with Generation Stupid in mind.

Is it annoying? Is it frustrating? Do I hate that stupidity has trumped smarts, and that movies like Sharknado get all the attention while genuine masterpieces of modern horror get overlooked and brushed under the carpet? To all three of those questions, I answer with a resounding yes. Yes, it’s annoying. Yes, it’s frustrating. And yes, I wish people would pay more attention to GOOD things than they do DUMB, BAD things.

That last paragraph more or less sums up what those ‘Sharknado Shamers’ were feeling when all of their fun friends were live tweeting along with Sharknado 2 last night, and I get it. I totally get it. Hell, even I had posted a tweet recommending horror fans tweet about overlooked gems from the last few years that they dug, rather than joining in the parade of stupidity that was going on over on Syfy.

That tweet, of course, was posted mere minutes before I caved, turned on Syfy and started my own live tweeting session. You see, I just couldn’t help it. And ya know what? I had fun. Sitting there on my couch, in my underwear, I had a good fucking time watching that piece of shit movie, and tweeting along with it. I smiled whenever anyone favorited or re-tweeted my silly commentary. And for the first time this whole week, I genuinely enjoyed what I was doing.

The fact that I was torn between joining in the fun and ignoring it is a perfect reflection of my feelings on Syfy originals, as a whole. I’ve always had a love/hate relationship with the network’s silly original movies, and which side of the coin I fall on is largely dependent on my mood, on any given night. Sometimes, I have fun with them. Other times, I wonder why they even exist, and just get mad that Sharknado trends on Twitter while serious, well-made horror movies NEVER will.

The bottom line here is that yes, it’s frustrating to see so much attention being given to movies that were intentionally made to be bad. But at the same time, is it really hurting anyone, or the genre as a whole, if horror fans have a little fun with a movie like Sharknado 2, every once in a while? Should we be looked down upon for live-tweeting Sharktopus vs. Pteracuda this coming Saturday night? Do we lose ‘street cred’ in the horror community, if we support this nonsense?

No. No to all of the above. There’s absolutely nothing wrong with celebrating stupidity, and it’s quite frankly the height of stupidity for one fan to criticize another for doing so.

For every Sharknado 2 tweet you post, post a tweet about a horror movie you enjoyed, that nobody else seemed to watch. Like most things in life, it’s all about a happy medium. So be happy. Enjoy the good stuff. Enjoy the bad stuff. Enjoy it all. And stop complaining about what other people are enjoying.

Because as dumb as Syfy’s movies are, doing that is a whole lot dumber.

As far as my thoughts on Sharknado 2 are concerned, I again must say I had a blast with the movie, and had a whole lot more fun than I had with the first one. It seems Syfy has finally found a way to make B-movie garbage that’s actually entertaining, which is an element that far too many of their movies have sorely lacked over the years.

And no, I’m not ashamed of myself. Sue me.