I’m going to start this article by attempting to do something tricky … I want to TRY and explain in words what appeals to ME visually in comic book artwork, not just Horror comics but all comic art in general.

I’ll be giving a few examples and some of you might think there is very little to link them to each other but hopefully parts of this will make enough sense for you to get the basic idea of what I’m trying to say. It would be hard enough to tell someone in person verbally but typing it out is even worse … quite often a passion for something or a particular style is difficult to justify, it’s just a feeling you have.

I’ll start with my favourite artist as a child, his name is Geoff Senior and he is probably most remembered for working on the Transformers UK comic that was published throughout the 80s and early 90s. I almost immediately fell in love with his work because it was unique, there were no other artists who drew like he did …
Senior didn’t put much detail in his panels but there was an energy about them. Hard lines, dynamic poses, intense facial expressions … and most of all I LOVED his use of blacks and shadows. 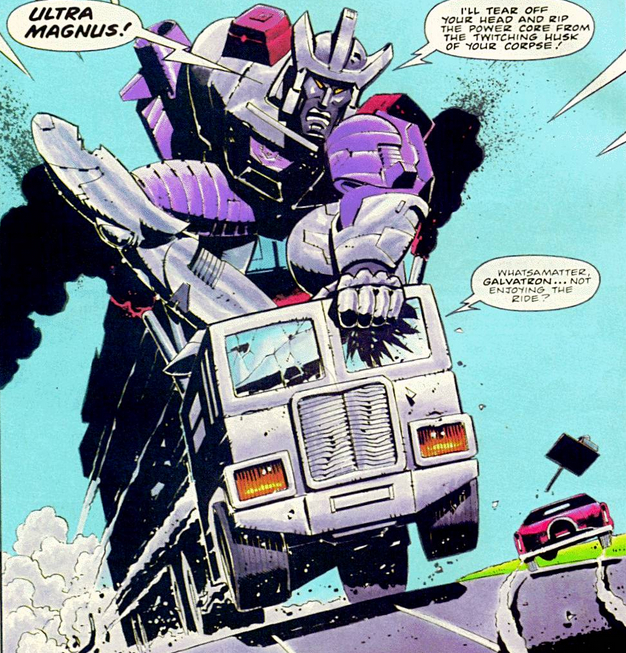 Look at the picture above, any surfaces or body parts that aren’t necessary to the story the picture is trying to tell you are in shadow, it makes your eye focus on what is important and really brings the colours to life. You don’t loose anything because he was such a clever artist … you don’t need to see detail on the side of the lorry because you know what it is thanks to the crisp silhouette … to me it makes the picture jump off the page.

As I got older and started to buy American comics I very quickly became a fan of Mike Mignola … he was another artist who was unique with his style and again was able to use silhouettes and shadows to create spooky and (to me) visually stunning pages. The picture below is one of my all time favourite images of an Alien Queen, not much detail but just precise shapes and lighting in all the right places. 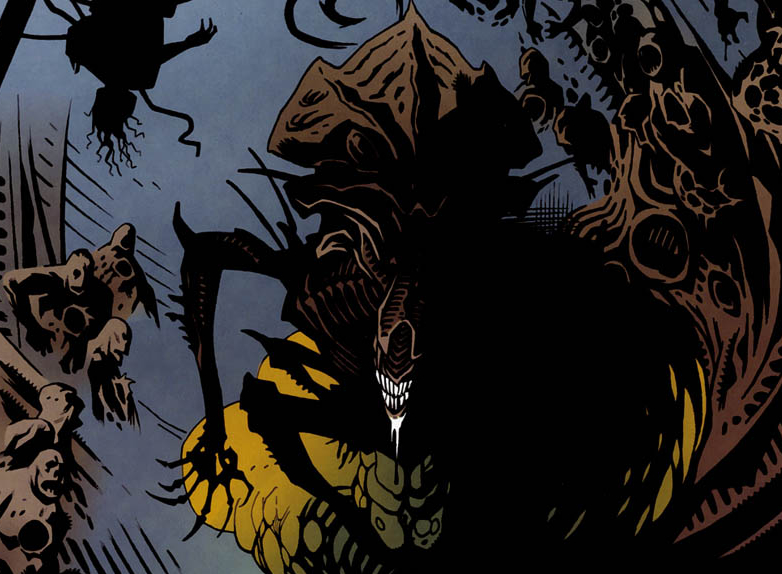 Adam Kubert was another who wasn’t afraid to shadow parts of characters which were unimportant to create visual impact and yes, yet again, nobody drew quite like he did. 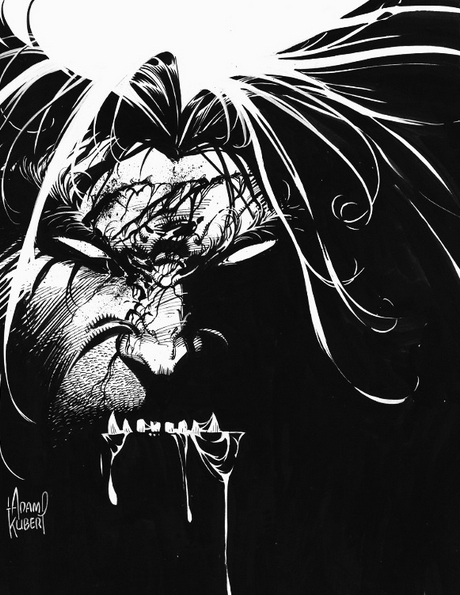 Then I discovered Kyle Hotz … If I was asked to name just one comic book artist who ticks all the boxes for me it would probably be him. Perfect shadows, exaggerated anatomies that fitted each character like a glove and wonderful little details that could be missed on a first read through which you would then notice days or weeks later when you revisited the book … Gothic, dark, brooding and just brilliant. It didn’t matter if he was drawing The Hulk or Evil Ernie … his unique style was always there and he didn’t compromise it or dilute it for any assignment. 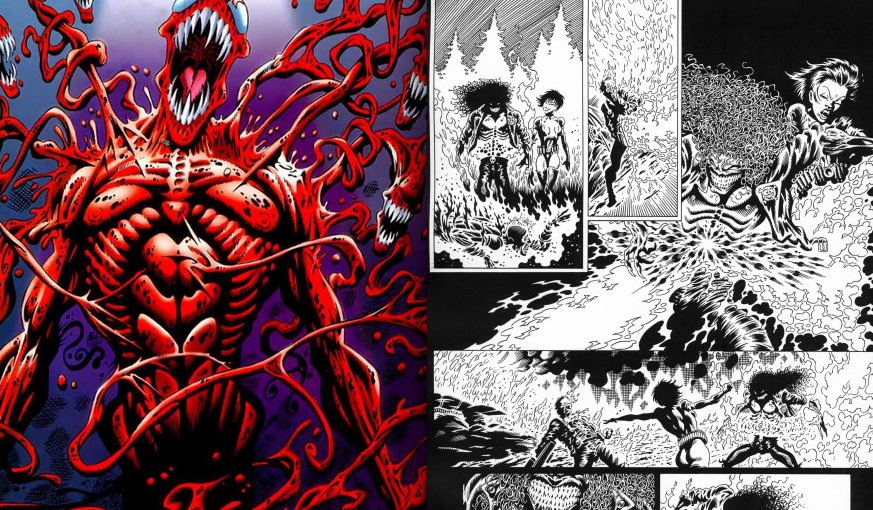 So … did that make sense?? I hope so … like I said, it’s not easy putting a love of something into words without getting tangled up and veering off course.

As I always do when I write about comics and art I decided to hassle the subject of the piece online to see if they would answer a few questions and give me a genuine insight into their work. I’m delighted to say Kyle was more than happy to do so and here is the short, sharp Q&A we had … 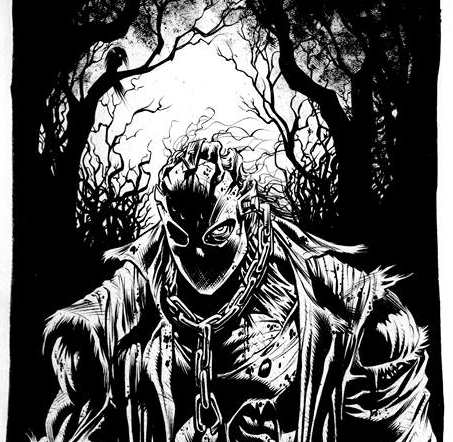 1. Over the years you have developed a reputation for being a ‘Horror art guy’ thanks to your unique style, is that a label you are comfortable with now and in the past?

KH: “Yes, I have no problem being a horror guy. The only issue is that most editors have a problem seeing someone who is good at shadows and blacks on atypical projects. I love horror, but would also like to do Hulk, Spidey, Lobo. It gets frustrating to be ignored for things I know I can draw well. But, in any case, when you get down to it, I’m pretty happy drawing monsters.”

2. You had a run on Evil Ernie with Chaos Comics, was that an enjoyable character/universe to work on? At the time I remember thinking You drawing Ernie was a perfect fit ..

KH: “I did enjoy all the Chaos stuff. It was before Hollywood decided to ruin zombies, so we were doing all kinds of fun things. I had hoped to do more Ernie after, but it didn’t work out. What made that project fun was that it was a year long, so I got to play around with a lot of different characters. Brian gave me a lot of leeway with how I interpreted the characters. Yeah, that was a very enjoyable year!” 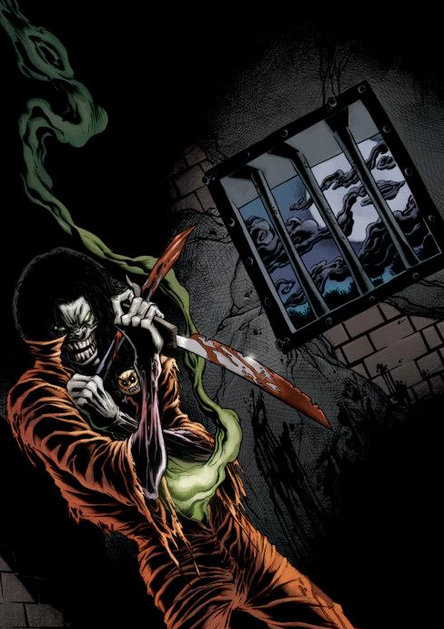 3. You’ve had a few artistic experiences with Marvel’s friendly neighbourhood Symbiotes, were the likes of Carnage and Venom fun to illustrate?

KH: “Well, the Venom Annual was not such a great experience. I only had a couple weeks to pencil it–which back then wasn’t too big a deal, since I didn’t have kids yet and liked working all thru the night. But the inking was horrible and you can’t really see too much of what I drew. Carnage was a lot of fun, though. Warren Ellis, come on! had to be fun. Everything about it was tailor made for someone like me. It was a marvel bad guy, but way edgier than how he’d been. I remember my editor telling me some teacher group banned it and it was at least partly responsible for Marvel’s rating system.”

4. Is there a comic book character you would love to work on that hasn’t come your way yet?

KH: “I’d love to do Lobo. Of course I mean the real Lobo. I’d like Swamp Thing, more Man-Thing issues, Morbius. Obviously Batman, but I’d really have to find a different angle, since Kelley (Jones) already did the freaky long eared bats so well.”

KH: “I have at least 100 favorite horror movies. I’ll list a few, but it’s by no means a complete list–Curse of the demon, The Howling, The Fog, Deathdream, Alligator, The Exorcist 1 and 3 (which is every bit as good as the first one), Creepshow, Tenebre, Deep Red, The Beyond, Day Of The Dead, anything hammer, Prophecy, The Descent, and this list could just go and on”….

6. Was art your destiny from a young age or did someone or something put you on the creative path?

KH: “They tell me I was drawing before I could walk, so I guess it’s always been in the plan for me. I think a steady diet of giant monster movies and hammer flicks, and anything with Peter Cushing just focused whatever bit of inborn talent I had. Of course I read all the comics I could growing up as well. Even though they are not horror, there are some issues of Marvel team up, Marvel two in one, Batman, and the Hulk that had a huge influence on me.”

7. Finally, do you have a piece of work/project you are most pleased with in terms of the end result or is that the classic ‘favourite child’ question to you?

KH: “My favorite books are all the Billy The Kid books I do with Eric Powell at Dark Horse. I think those are really the closest thing to what I wanted to get on the paper. I also am pretty happy with the second Zombie mini series I did for Marvel. It’s the only thing I’ve written as well as drawn for Marvel, and I threw in everything I love from the seedy monster movies I grew up on. I do hope that my best is yet to come…whether its axe wielding psychos or super heroes.” 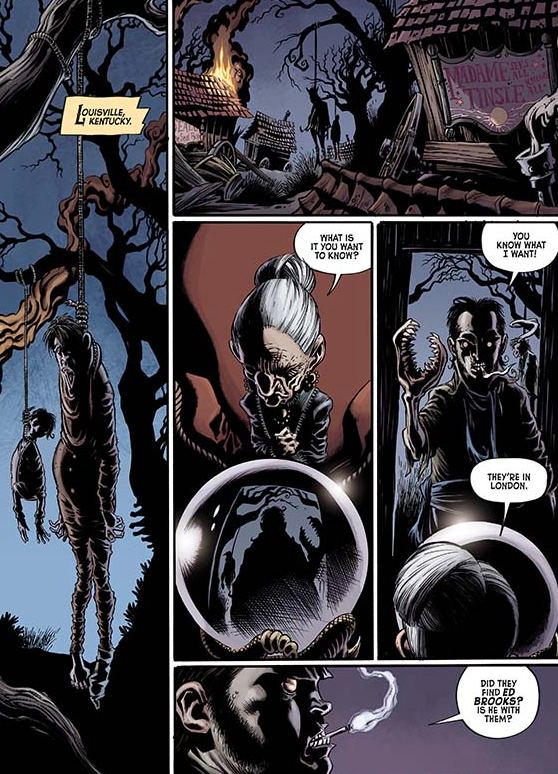 On behalf of myself and everyone here at Halloween Love I’d like to say a huge thank you to Kyle for freeing up some time to answer my questions. I’ve admired and enjoyed his work for a long time and I’m always humbled and thrilled when busy professionals respond to my messages. A great guy and a great artist.