It’s been a painfully long two weeks since we last took a dive into the lady pond that is Scream Queens. We pick up right where we left off with the Chanels accusing #5 of killing her newest boyfriend. Before they can really get too far into the blame game, Dr. Munsch shows up to help them dispose of the body. Yep, no need to call the police. After all, as Munsch explains, that would only look bad for the hospital. It’s become clear that the Green Meanie is offing patients of the CURE Institute. But, why?

Wasting no time at all, we find last weeks patient and best friend to Chad Radwell, the dude who couldn’t stop screaming at EVERYTHING, is cured. He’s so excited that when he sees the Green Meanie before him , he assumes it’s a final test. And wouldn’t you know, he’s not scared – even when the Green Meanie yields a big scythe. Nope. Nothing. Nada. He’s a new man, but we already know this is not a test and our poor patient is mincemeat. It’s a great scene that had my laughing at it’s absurdity but quickly transitioned to cringe inducing (in the best possible way) once the reality of the situation donned on the poor schmuck. His death is bloody and brutal as the Green Meanie repeatedly hacks away at his chest.

The rest of the episode is mostly made up of more pissing matches, or sperming(?) matches, between Radwell and Dr. Holt. Only now, Radwell has upped his game; he proposes to Chanel who accepts despite Chad’s clearly monogamy-phobic ways. We also get one more steamy, naked locker room scene between the two dueling bros, because, why not? Meanwhile, a genuine romance seems to be blooming between #3 and Dr. Cassidy. #3 opens up and admits to being dead inside while Cassidy admits to being…well, just dead. He’s convinced that he’s still “living” because he has some greater purpose, and #3 has never experienced an orgasm. So, that must be his calling here on earth. 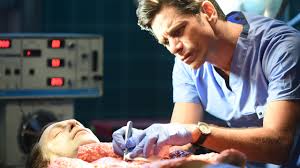 Now what about all the murder and mayhem? This is a slasher show, right? Yes, and unlike a lot of slasher series of late (I’m looking at you Scream), Scream Queens seem to have perfected its balance of soapy comedy and gruesome carnage. We actually have two, possibly 3, murders in this episode. There was “screams too much guy” and guest star, Cheri Oteri, playing a woman who can’t stop having orgasms. She is admitted and quickly cured thanks to some foreplay masquerading as medical research between Cassidy and #3. Unfortunately, just as she is to be released, the Green Meanie rears his ugly horns once again. This time the murder comes out of nowhere. He slings his scythe through the air, decapitating the patient in a slow-mo, operatic moment that would make Argento proud.

The mystery is furthered a bit more once the ladies track down a survivor of the 1986 hospital massacre based off a tip from Hannibal Hester. This survivor is Nurse Lynn who informs our Scooby gang that before her death, Nurse Thomas had confided in him. He relays the story we already known of the pregnant woman and her husband being dumped in the swamp. Lynn is also convinced that the woman’s child is the person behind the threatening phone calls he’s been receiving. 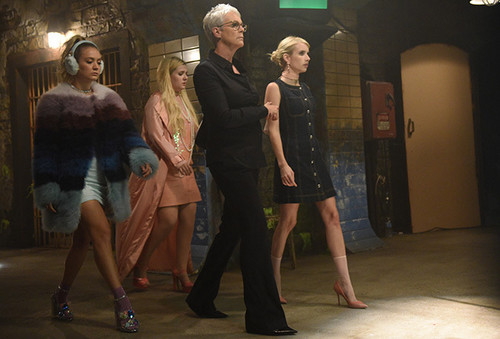 The gang does the math and determines if the killer is the child born in 85′ then they would now be 30. And due to the Green Meanie’s height, around 6 foot, they must also be a man. This leaves them with a very small pool of suspects. All suspicion squarely falls on Chad Radwell, but enough worrying about all this murder mystery business, we have an impromptu wedding to attend!

So, yes, what seems like only one day after the proposal, Chanel, having spent a boatload of Chad’s money, is walking down the aisle. All is going well: Chanel’s massive ring with built in wi-fi is sparkling, #3 and Zayday make beautiful bridesmaids, and #5, dressed as a dog, is the perfect ring bearer. Tragedy strikes when the ceiling caves in, and Chad’s body comes crashing down before the bride to be. He’s dead, or at least, he seems to be. It’s a shocking moment as Chad is certainly a fan favorite. His death would be akin to the The Walking Dead daring to kill off Daryl. It’s a ballsy move. 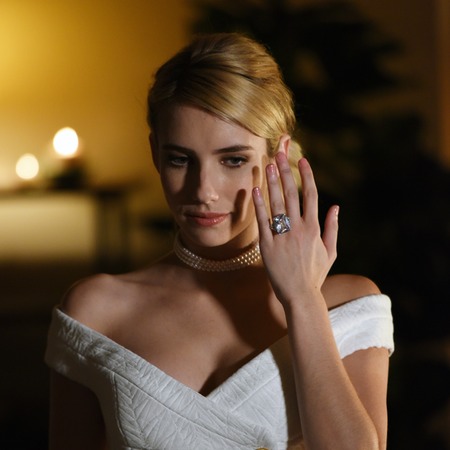 I’m not sure I buy it, however. His death doesn’t match the Green Meanie’s MO so far. He’s not a patient. Also, we don’t actually see the murder. There’s a great possibility he got the idea from “good, gay friend” Boon’s fake death last season. Only time will tell, but so far Scream Queens Season 2 is shaking out to be pretty great. The mystery is surprisingly compelling, the deaths have provided some memorable set-pieces, and the humor and snappy dialogue is on point.

Here’s hoping the shows low ratings don’t lead to cancellation mid-season, though I don’t think Fox would do that to Ryan Murphy. I hope not anyway. Next week is sure to be a blood bath as it’s the HALLOWEEN EPISODE! We already know the Green Meanie has a penitent for mass murder come October 31st, so next week should prove to be a real scream! Sorry, I couldn’t help myself.

Best Line of the Week

Chad, fighting with Dr. Holt over Chanel in the presence of Dr. Munsch, is outraged when Holt reveals he is the highest paid sperm donor in the state:

“Oh, are we having a sperm off?! Because I would win. I banged both women in this room…with my SPERM!“