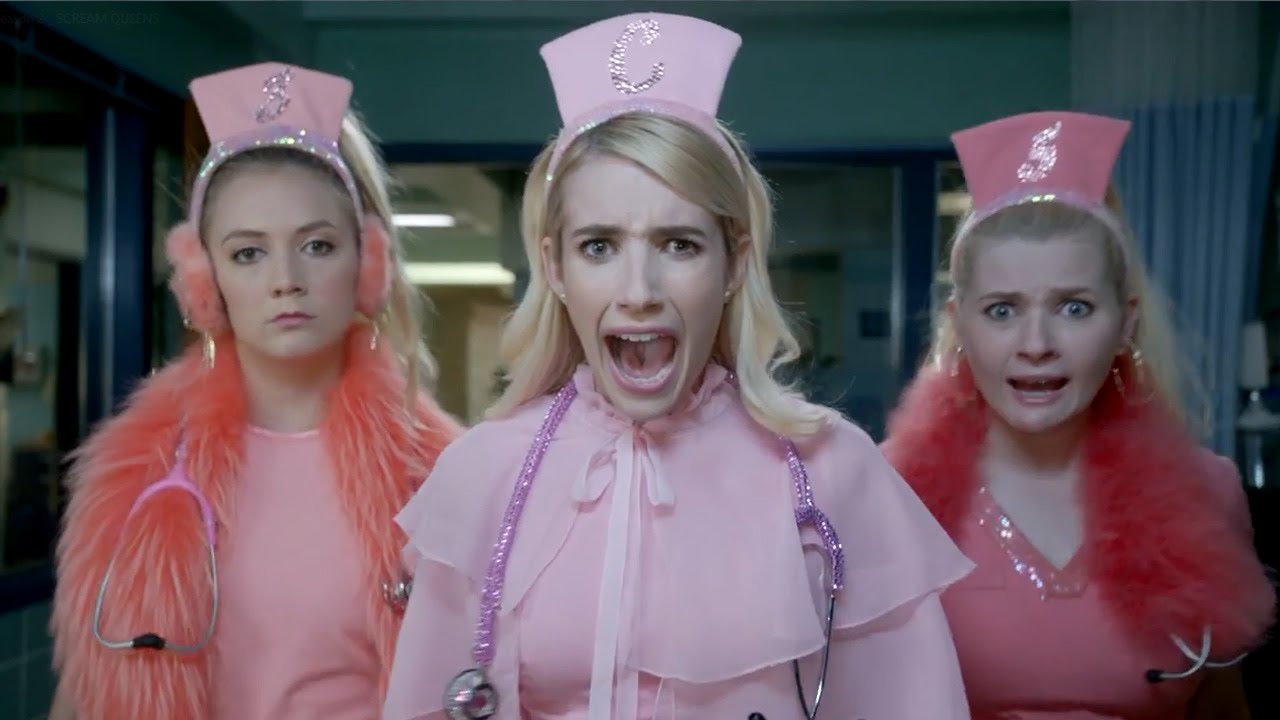 When Scream Queens premiered last year, it was after a heavy marketing push and a lot of fanfare. It was the newest show from mastermind Ryan Murphy, the man who brought us the hits Glee and American Horror Story. He’d even managed to snag the OG scream queen herself, Jamie Lee Curtis (Laurie Strode from the Halloween films…but you knew that already, right?). There was a lot of buzz around this show. The premiere had fairly healthy ratings but quickly petered off with each subsequent episode. It seemed unlikely there would be a season 2.

However, this being a show mostly targeted toward younger female viewers (I’m fairly certain my spirit animal is a teenage girl in a unicorn onesie, but that’s a different story) it found greater numbers through Fox’s streaming service and VOD. While typical Nielsen ratings are the name of the television game, Fox saw fit to give Scream Queens a second chance, and here we are with “Scream Again”. This first episode starts us off on a brand new mystery and setting for all the murder and mayhem, but is it any good?

By the way: SPOILER ALERT!

The answer: it’s alright. We open to a smashing Halloween party on October 31st, 1985. The nurses and doctors of a rundown hospital are dancing the night away while paying no mind to their patients. A concerned pregnant woman forces Nurse Thomas (Laura Bell Bundy) and Dr. Mike (Jerry O’Connell) to check in on her sick husband. It turns out the man is in need of an emergency operation. Not wanting to miss out on the party, Dr. Mike convinces the wife not to worry while he and Nurse Thomas wheel the man out and dispose of his body in the creepy noxious swamp right outside. Ya know…because people normally build major hospitals only feet away from noxious swamps.

This is the eerily similar setup for season 2. It certainly calls to mind the “bathtub baby” from the first season, and I’m sure the mystery of the pregnant woman’s child will turn out to be a driving force behind this year’s killer. Speaking of the killer, we are also informed during the cold open of a local legend concerning a creature that haunts the swamp, the Green Meanie. It’s no surprise then that the green horned demon costume Dr. Mike was wearing turns out to be our new slasher’s dramatic disguise.

Flash forward to the present, and the show wastes no time in getting us caught up with our returning cast of characters. Curtis’s Dean Munsch is now Dr. Munsch; she was given the honorary doctorate that was taken from Bill Cosby. She uses her newfound medical license to open a hospital with the intent of taking on some of the world’s most bizarre and incurable cases. Curtis gets some back to back laughs in her introduction, from her TIME magazine cover to her self important TED Talk. Curtis is having a ball with this character and it shows. Munsch brings on Zayday Willaims (Keke Palmer) to finish out her residency in the new clinic while also finding a way to bring back the three surviving Chanels: Chanel #1 (Emma Roberts), Chanel #3 (Billie Lourd), and Chanel #5 (Abigail Breslin).

In one of the episodes best bits, we learn the Chanels were exonerated from their conviction of last year’s murders due in part to an award winning Netflix documentary, “Entrap a Kappa Kappa: Murder on Sorority Row”. It’s seems the ever determined Special Agent Hemphill (played with her usual hilarious gusto by Neicy Nash) was able to record a confession (on VHS tape no less) from the true Red Devil killer, Hester, who found herself confused by the term “double jeopardy”. Admitting to the crimes but convinced she can’t be convicted since the Chanels were already tried and found guilty, Agent Hemphill explains, “It’s SINGLE jeopardy!”

The three newest additions to the cast represent fun foils to our returning characters. John Stamos as the ever sexy Dr. Holt is carrying a potential deadly secret; he’s the first successful recipient of a hand transplant after a freak garbage disposal accident. There are a couple of moments where his hand appears to have an evil mind of its own. I’m sensing an eventual Evil Dead 2 homage. John Stamos fighting with his own severed hand? Yes, please. You won’t find that shit on Fuller House.

Taylor Lautner as Dr. Cassidy Cascade and Kirstie Alley as Dr. Hoffel round out the cast but aren’t given a lot to do just yet. Alley does manage to play a decent ice queen who has it out for the Chanels. Lautner appears to be harboring a secret of his own; he’s ice cold to the touch. Is he some form of the living dead?

It’s fun to think they’re laying the groundwork for some more over the top, supernatural occurrences this season: Holt’s possessed hand, Cascade’s unnatural body temp, the mysterious swamp and the green ooze dripping from the killer. The show is not based in any sort of reality as we may know it, and I for one would be okay with them just going balls to the wall with various horror motifs. As it stands, though, this episode was fairly middling.

I thoroughly enjoyed last season but felt it suffered the fate of most Ryan Murphy productions. It started out strong, got lost in the middle, and then came out swinging by the finale. Scream Queens new season, however, started with a bit of a whimper. The jokes didn’t come at a lightning pace and most of them elicited a smile and chuckle rather than full out guffaw. The producers have stated they intend to lean more heavily into the comedy than the horror this year. That’s fine. The show has never once been remotely scary or intense, but the comedic edge felt a tad dulled. I hope their interest in trying to appeal to a larger audience this time out as opposed to specifically targeted millennials, content to stream the show from their smart phones, doesn’t mean the overall product gets watered down…thus pleasing no one.

Another concern, that I’m sure is related to the first season’s ratings, is that the budget seemed much smaller than before. Everything is fairly contained to several generic hospital locations. Luckily, a confined environment such as a this could potentially benefit the more slasher-centric elements of the show. While I understand they’re spoofing medical dramas like House as much as they’re riffing on horror tropes, I feel like some more care should be taken with the production design. Everything outside of the final scene is brightly lit and there’s no sense of foreboding to the sets. As silly as season 1 was, it looked and felt like a stylish horror film. So far, this really does look and feel like a stuffy medical drama.

As mentioned, the final scene breaks from this mold. We get an effective moment cast in the unnatural green and red glow of an 80’s Italian flick. Chanel #5 and this week’s patient of the week, a girl covered head to toe in hair suffering from “werewolf syndrome”, are both locked in hydrotherapy tubs. Then enters the Green Meanie wielding a large surgical blade. He quickly chops off werewolf girl’s head and then – well, Chanel #5’s fate is left up in the air as the credits roll. We’ll have to tune in next week to find out if she makes it. I have a feeling she’ll be just fine, but I wish they would take more risks and actually put some of the main cast in jeopardy.

Overall, I’m intrigued to see where they go this season with the new mystery. Unless there is a drastic turn around in the ratings, we probably won’t get a season 3. So I say, go crazy. Kill off major cast members. Crank up the gore and mean spirited humor. If you’re going to go out, make sure you have a ball doing it. I know that’s what I’m hoping for at least.

Best Line of the Week:

In reference to #5’s new job as a dentist’s receptionist, “#5 did it to get free braces for her vagina teeth.” – Chanel Oberlin

Promo for next week’s episode, “Warts and All”:

Let me know what you thought of the episode below!