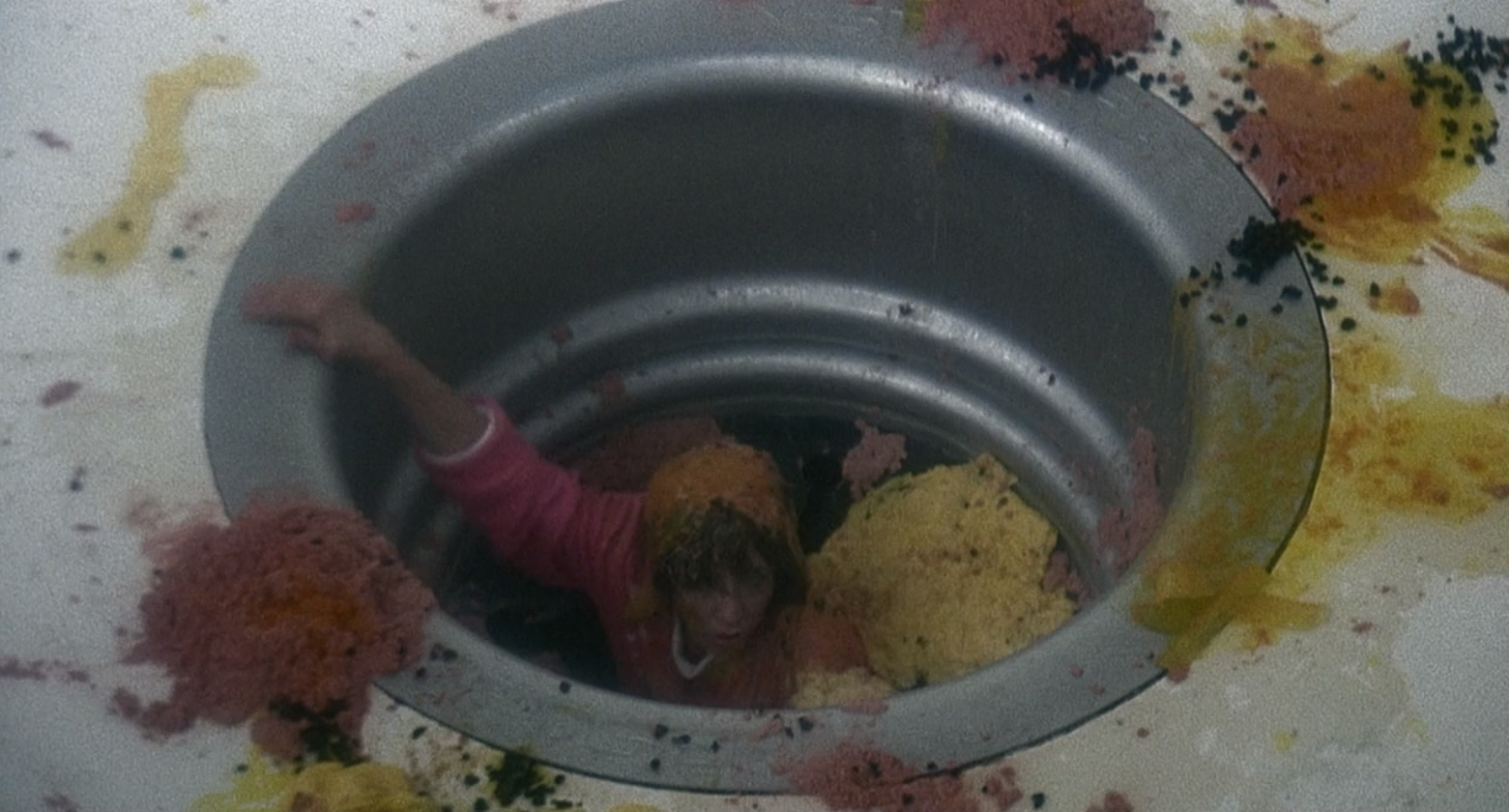 When you’re a kid, movies can get to you in a way that they just can’t when you’re grown up. By the time you’re in elementary school, you know a lot about what’s supposedly “real” and what’s supposedly “unreal,” but the line between those worlds is blurrier. Generally, your imagination is a lot more active during those early years, too. That’s not always a good thing, though. While your still-developing brain is capable of transporting you to worlds of fun and fantasy, it’s also capable of conjuring up horrifying delusions out of nearly nothing. There could be monsters lurking in every dark corner of your room. And who knows what’s happening under your bed at night? That’s why childhood is terrifying; so much is still unknown to you.

I must’ve been around eight-years-old when I saw the 1981 Lily Tomlin comedy The Incredible Shrinking Woman on TV, most likely on WKBD, an independent station broadcasting out of Detroit. (It’s now a CW affiliate, but such things didn’t exist back then.) In retrospect, WKBD introduced me to a lot of movies. It was where I first saw Clash of the Titans (1981), Murder by Death (1976), Five Card Stud (1968), and The Seduction of Joe Tynan (1979). But none of those other movies — memorable as they are — burrowed their way into my subconscious quite the way The Incredible Shrinking Woman did.

Specifically, I was traumatized by the scene in which Tomlin’s tiny character, an average housewife reduced to the size of a doll, falls into a garbage disposal and is very nearly killed. I was never one of those kids who feared being sucked down into the bathtub drain, but that garbage disposal scene seemed weirdly plausible. My family had a garbage disposal! Could that be me someday?

I had not really revisited The Incredible Shrinking Woman since the mid-1980s. I knew only that its critical reputation was not good and that most retrospectives of Lily Tomlin’s career didn’t dwell on it. But October is a good month for confronting one’s deep-seated fears, so I decided to sit through it again.

As you probably already know, the film is a feminist-themed remake of the classic Universal horror film The Incredible Shrinking Man (1957), directed by the great Jack Arnold and based on a novel by the legendary Richard Matheson. Classic horror junkies know that Shrinking Man is one of the more thoughtful and downbeat films in the Universal canon. While Scott Carey (Grant Williams) has to deal with adversarial cats, predatory spiders, and other deadly threats, the movie also shows how shrinking affects his mental health, his professional life, and his marriage. By the end, the film has practically become an existentialist philosophy lesson, with Scott musing about his place in the universe as his body shrinks away to nothing.

This new version centers around harried housewife Pat Kramer (Tomlin), an overworked and underappreciated mom with two rambunctious children (Shelby Balik and Justin Dana) and a sweet, but slightly dim advertising executive husband named Vance (Charles Grodin). One day, as a result of all the toxic chemical additives in her food and other household products, Pat begins to shrink. Vance takes her to doctors, but to no avail. Meanwhile, Vance’s boss Dan (Ned Beatty) is worried that Pat’s story will frighten consumers and pressures the Kramers not to talk about the true cause of her condition. It turns out that Dan is part of a truly evil cabal (whose other members include John Glover and Henry Gibson) with nefarious plans for the shrinking woman and the entire world population. It all leads to Pat trying to escape a research lab with help from an eccentric janitor (Mark Blankfield) and a super-intelligent gorilla named Sidney (Rick Baker in a monkey suit).

I’m glad to report that, despite Richard Matheson’s reported disdain for it, The Incredible Shrinking Woman is not a complete insult to the original story. For one thing, there’s some intriguing talent at work here. It’s directed by, of all people, Joel Schumacher, whose previous experience was helming a couple of made-for-TV movies and adapting The Wiz (1978) for the big screen. The screenplay for Shrinking Woman was written by Lily Tomlin’s longtime creative and romantic partner Jane Wagner. (The duo’s previous big screen collaboration, Moment by Moment, had been a critical and box office disaster just three years earlier.) Best of all, the cast includes some crackerjack supporting actors. Besides Tomlin in multiple roles, we get Charles Grodin, Ned Beatty, Mark Blankfield (from Fridays), sinister John Glover, and Tomlin’s old Laugh-In cohort Henry Gibson.

On a technical level, considering this was Schumacher’s feature debut, The Incredible Shrinking Woman is quite decent. Some of the rear screen projection looks a little wonky by today’s standards and the transfer I watched on Amazon appeared gauzy and blurry, but these factors do not detract greatly from the overall viewing experience. Besides, in a movie like this, what you really want to see are giant-sized versions of everyday objects. And The Incredible Shrinking Woman has plenty of these — a cigarette the size of a bazooka, strips of bacon that look like Slip ‘n’ Slides, and a giant Ken doll who becomes Pat’s surrogate husband when she moves into a dollhouse. Film fanatics will also note that Schumacher has included visual references to other Jack Arnold movies, including This Island Earth (1955) and Creature from the Black Lagoon (1954).

With Lily Tomlin in the lead, you’d expect Shrinking Woman to be a high-spirited comedy, and there is a fair amount of zaniness and slapstick on display here. The film isn’t above having characters slip on banana peels, for instance. Tomlin plays several roles in the film, including her famous telephone operator Earnestine. Very often, the film’s tone is similar to a raucous family sitcom or a wacky comedy sketch. In particular, since so much of this film is a spoof of advertising and consumerism, I was strongly reminded of a recurring bit on The Carol Burnett Show in which a weary housewife is attacked by advertising mascots and spokesmen every time she enters her kitchen.

But there are some serious, even grim passages of The Incredible Shrinking Woman. Pat’s experience, as she admits to talk show host Mike Douglas (appearing as himself), is mostly a nightmare. She can no longer have sex with her husband. Her children stop obeying her. She becomes an unwanted celebrity, attracting gawkers and predatory journalists. The Kramers’ medical bills start piling up. Then Pat gets kidnapped by the aforementioned cabal, leading Vance to think his wife is dead, and this takes the film in a bizarre, almost surreal direction closer to the “body horror” films of David Cronenberg. The relationship between Pat and Sidney, meanwhile, reminded me of the psychic bond between Jan in the Pan and the misshapen monster in The Brain That Wouldn’t Die (1962).

Then there is the matter of the garbage disposal scene that caused me such nightmares in the 1980s. It occurs about two-thirds of the way through the movie. By this time, Pat is just a few inches tall and reduced to wearing doll clothes. Vance and the kids have left for the morning, leaving Pat alone in her kitchen. The only other person in the house is the family’s maid Concepcion (Maria Smith), who actually enjoys all the media attention the Kramer household is getting. Attempting to wave goodbye to her husband and children, poor Pat tumbles from the counter into the sink, finally landing in the dreaded garbage disposal. This is the film’s most impressive set by far — a rancid, shadowy pit filled with half-eaten food and potentially deadly blades. It looks like something out of a Saw sequel.

Naturally, Pat shouts for help, but she cannot be heard over the din of a nearby radio. I think this is the aspect of the scene that disturbed me most, i.e. that the woman’s desperate pleas go unheeded. It’s like one of those dreams in which you scream and scream but make no sound. In the movie’s single most nerve-wracking moment, the utterly oblivious Concepcion is just about to flick the “ON” switch when she is called away by someone at the door. Pat, drenched in garbage, does manage to pull herself out of the garbage disposal, only to be kidnapped immediately by one of the film’s many villains. When Concepcion returns to the kitchen, she sees one of Pat’s tiny little shoes near the mouth of the garbage disposal and assumes her employer has been ground up. She screams in absolute terror. All through this, the festive Latin music emanating from the radio serves as a ghoulishly ironic counterpoint to the action.

Nearly forty years later, the garbage disposal scene from The Incredible Shrinking Woman remains a stunner. It’s like, in the middle of this goofball family comedy, the filmmakers decided to throw in the most disturbing Twilight Zone episode they could imagine. That’s hardly a complaint. In fact, I wish the filmmakers had greatly toned down the comedy and concentrated more on the horror and drama. Even as it is, the film is well worth watching. The sillier aspects of the plot will turn a lot of people off, and the film’s entire third act is a disjointed, sometimes incoherent mess. But there are enough interesting moments and memorable performances here to warrant a viewing. Just keep your hand away from that garbage disposal!