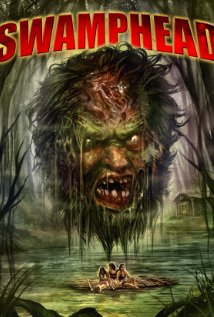 This is a bad movie. Normally, I bury the lead on how I feel about something I review until at least the second or third paragraph. But I literally had no way of opening up this review. I tried everything in my bag of tricks (which is honestly more like a fanny pack) to get this thing off and running. But I got nothin’. This is a bad movie. YOU HAVE BEEN WARNED.

Shot on video horror has become more and more common even after the death of VHS. Crowd source financing and inexpensive cameras have made film making an easier endeavor than it has been in years past. Anybody can make a movie!!! The only downside to this is ANYBODY can make a movie. Writers/directors Dustin Drover and Justin Propp made Swamphead over the course of four years. The last time I heard of a filmmaker taking years to complete a movie, it was David Lynch’s Eraserhead. While Swamphead tells a story that is less confusing, that doesn’t make it any easier to watch.

Swamphead is the tale of Steve, Marty, Megan, Nastalgia & Haun. A group of four friends and a mentally handicapped tag along who go camping and find themselves on the run from a creature known as Swamphead, the disembodied head of a Norse warrior who was decapitated by Native Americans. Now, they must find the knife that was used to behead the creature years before in order to stop him for good.

While that is the plot as best I can surmise, the movie itself is not really about the story but about the characters. This movie is what would happen if Napoleon Dynamite crossed over with Tim & Eric and was full of profanity, dick & fart jokes and mocking the disabled. I know everyone has their own moral barometer, as well as their own sense of humor, but this movie was quite distasteful for no reason other than being distasteful. More often than not, the jokes either didn’t land or weren’t funny to begin with. I think there were more jokes about the disabled character crapping his pants than there were kills by Swamphead. The gore effects were great, as well as the camera work, considering how low the budget was on this picture. But those two things in and of themselves could not save this messy movie.

While I do not recommend this movie to folks who are looking for a quality horror comedy, I will say one thing. This movie would be great with a group. Not necessarily a theater full of people, but enough people to share a few drinks with while you rip it apart a la MST3K. I might be dead wrong, you may love this movie. And I apologize to the creative minds behind Swamphead. This movie was your vision. It is exactly what you wanted it to be. I’m just saying I personally didn’t dig this one. But what do I know? I still love Howard the Duck.