We’re now halfway through the fourth season of FX’s American Horror Story, which is set inside the oddball confines of the Freak Show. For the first time in the show’s history, I’ve been one of the people contributing to the weekly ratings, as the overall theme of the season was one I simply couldn’t ignore.

Truth be told, I never gave past seasons much of a chance, often giving up after the premiere episodes failed to capture my interest. Something about the show just never connected with me, though that all changed on October 8th, when Freak Show instantly converted me into a weekly watcher.

In so many words, American Horror Story: Freak Show is batshit crazy, and I absolutely love it for that.

Now that we’ve hit that halfway mark, I wanted to shine the spotlight on five of my personal favorite moments from this season, since I never did get around to writing up weekly recaps. So let’s head off to the Freak Show together, shall we?! 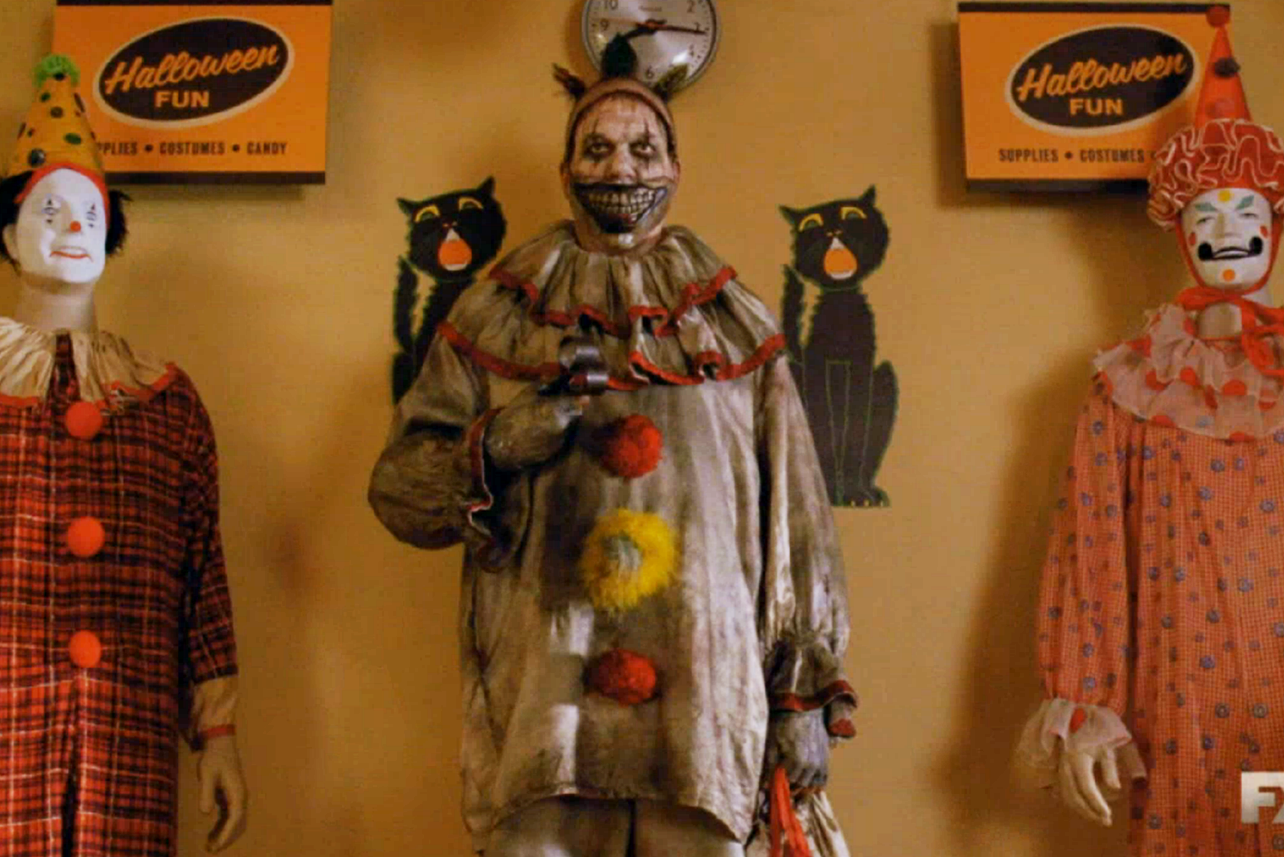 Though the Freak Show is filled out with a whole host of colorful characters, none will go down in history as being more memorable than Twisty the Clown, who became a bonafide horror icon BEFORE the season even premiered. And that iconic status only grew, as the body count rose.

In Episode 2, titled ‘Massacres and Matinees,’ Twisty decorated the walls of a toy shop with a whole lot of blood, first decapitating the store’s owner (off-screen) and then thrusting a pair of shears through the neck of an employee.

From a wind-up robot tracking blood through the store and letting us know that some nasty shit had gone down to Twisty blending in with two mannequin clowns, the whole sequence was brilliantly executed, serving as a fine example of the artistry on display in American Horror Story.

If you go back and watch the scene, you’ll even notice that the store owner’s severed head was briefly shown sitting on the shelf, moments before the employee actually discovered it. If you noticed, you probably thought it was merely a Halloween mask on display, and it’s those fun little touches that I love so much. 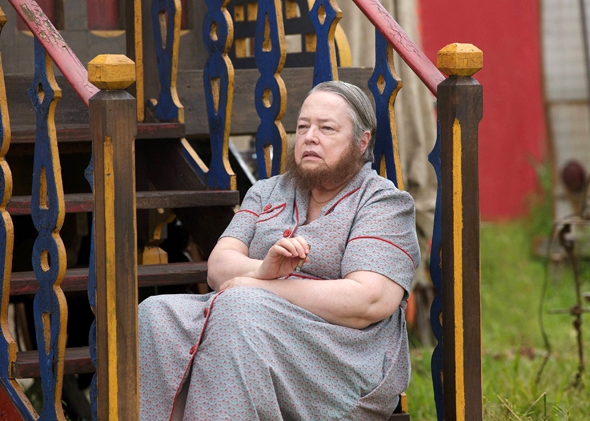 2) ETHEL GOES TO THE DOCTOR

I think it’s pretty safe to say that many of us are watching Freak Show for the purpose of experiencing some pretty crazy shit, and there is indeed plenty of that madness on display – from Lobster Boy pleasuring women with his ‘claws’ to Angela Bassett revealing she’s got three boobs and a ding-a-ling.

In addition to that sort of insanity that we just can’t find in our daily lives, there’s also a whole lot of genuine humanity on display this season, with Kathy Bates’ Ethel ‘The Bearded Woman’ Darling being a large source of that relatable humanity.

In ‘Edward Mordrake: Part 1,’ Ethel visits the local doctor, who informs her that she has cirrhosis of the liver, and only six months to live. Ethel breaks down and cries, and when the doctor tries to comfort her, she reveals that she’s not crying because of the diagnosis: she’s crying because he’s the first person to ever treat her like a human being.

It was a heartbreaking scene, and the moment that has thus far provided us with the best insight into the damaged mind of a freak show performer. Like Ethel, they all just want to be seen as human beings, which is a courtesy that all too often remains out of their grasp.

Viewers have had many negative things to say about Freak Show‘s musical numbers, which often consist of Jessica Lange’s Elsa Mars singing covers of modern day songs. The songs don’t fit the time period, which is where much of that negativity stems from, but it doesn’t bother me in the least. Good music is timeless, after all.

As much as I typically hate when characters in movies/TV shows break into song, those musical numbers have made total sense in the world of Freak Show, as they’re an organic part of the titular show itself. In ‘Edward Mordrake: Part 1,’ Mars tossed aside carny folklore and performed on Halloween night, the performance granting the deceased Mordrake an invitation to cross over from the other side.

Mars’ Halloween performance was a rousing rendition of Lana Del Rey’s ‘Gods and Monsters,’ which absolutely gave me chills. It was a beautiful cover of a beautiful song, with the visual of Mordrake being escorted into the tent by a thick green fog making the whole scene a true work of art.

Complain all you want about the time period issue, but I couldn’t care less. It’s the fact that American Horror Story doesn’t play by the rules that makes it so cool, after all. 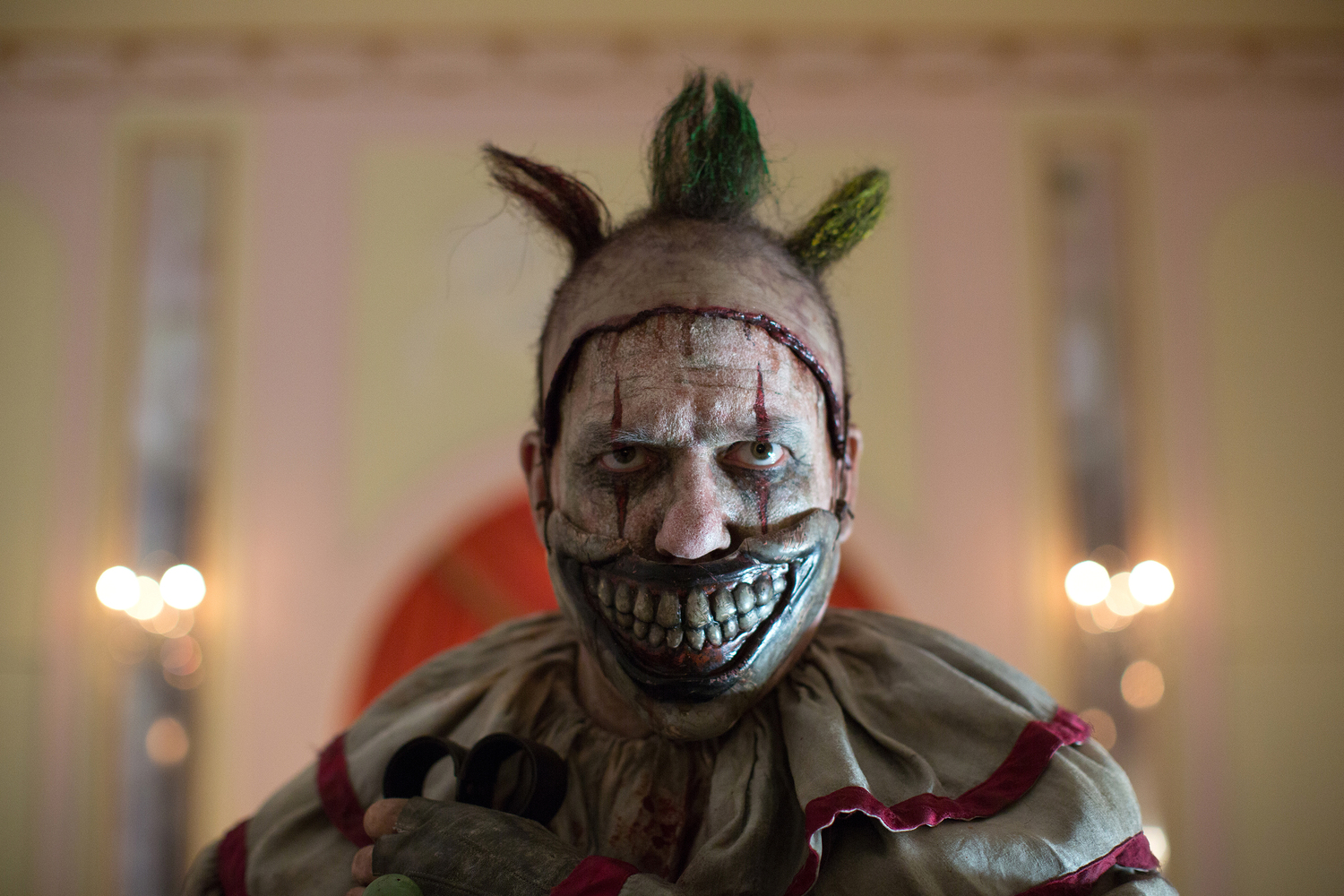 After being an absolutely horrifying monster throughout the first few episodes, Twisty’s very human backstory was revealed in ‘Edward Mordrake: Part 2,’ when Mordrake’s evil face demanded that the clown spill the beans on his deepest, darkest sadness.

It was both a shocking and surprisingly heartbreaking scene, as Twisty revealed that he was once a totally happy clown, who just wanted to make kids smile. After being accused of being a pedophile, and ostracized by everyone (including that toy shop owner..), Twisty attempted to kill himself, sticking a shotgun in his mouth and pulling the trigger.

Of course, the suicide attempt was a failure, leaving Twisty with a horribly disfigured mouth. At that point, he decided to ‘save’ children by killing their parents, and it was his failure to accept that he was doing wrong which led Mordrake to kill Twisty and add him to his collection of departed freaks.

If you had told me, going into the episode, that Twisty was going to be humanized and then killed off, I would’ve surely said that both ideas were incredibly bad ones. But the way the whole scene played out was absolutely perfect, and I can’t think of a better way to have wrapped up Twisty’s storyline and pave the way for a new killer clown to take over… 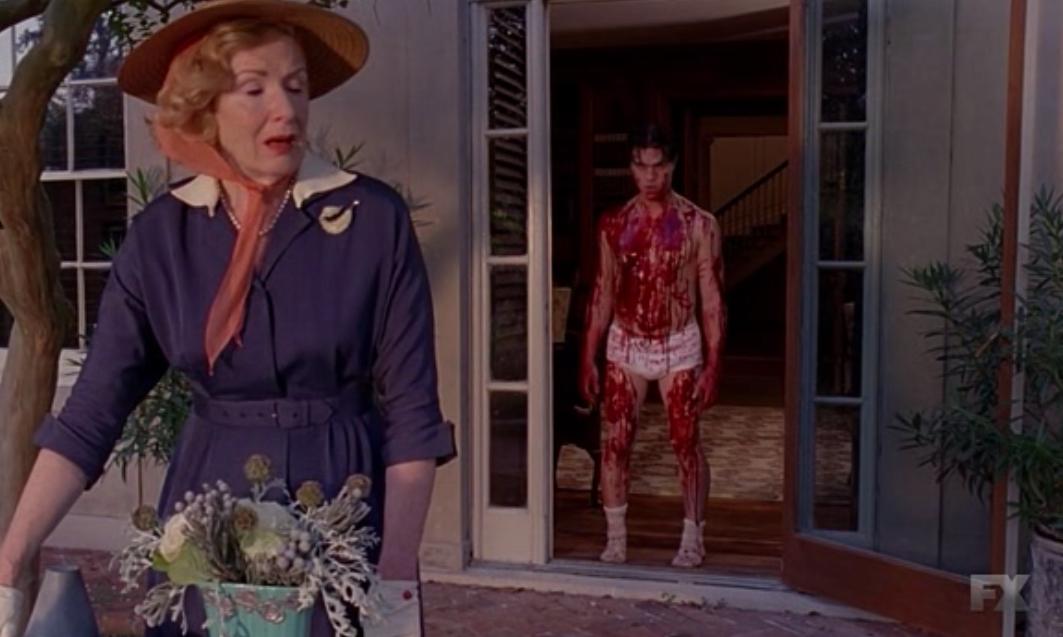 If there’s any shining star of American Horror Story this season it’s undoubtedly Finn Wittrock, who portrays murderous man-child Dandy Mott. Fans drew comparisons between Dandy and American Psycho‘s Patrick Bateman right off the bat, and a whole lot of fun was had with that similarity in Episode 5, titled ‘Pink Cupcakes.’

Dandy embraces his full Bateman in the episode, which first sees him exercising in his tighty-whiteys and then murdering a male prostitute in the same attire. After the brutal murder, wherein he stabs the man multiple times and then hacks off his limbs/boils them in acid, Dandy returns home to his mother, covered from head to toe in blood – in his underwear.

As scary as Twisty was, it’s Dandy who’s Freak Show‘s truly horrifying villain, as his outer image serves as a deceiving mask of sanity, and his social status allows him the freedom to live out all of his sadistic desires. He’s Patrick Bateman and Norman Bates rolled into one, and yet another character from this season who’s destined to become an enduring horror icon.

What have been your favorite moments this season, thus far? Comment below and let us know!