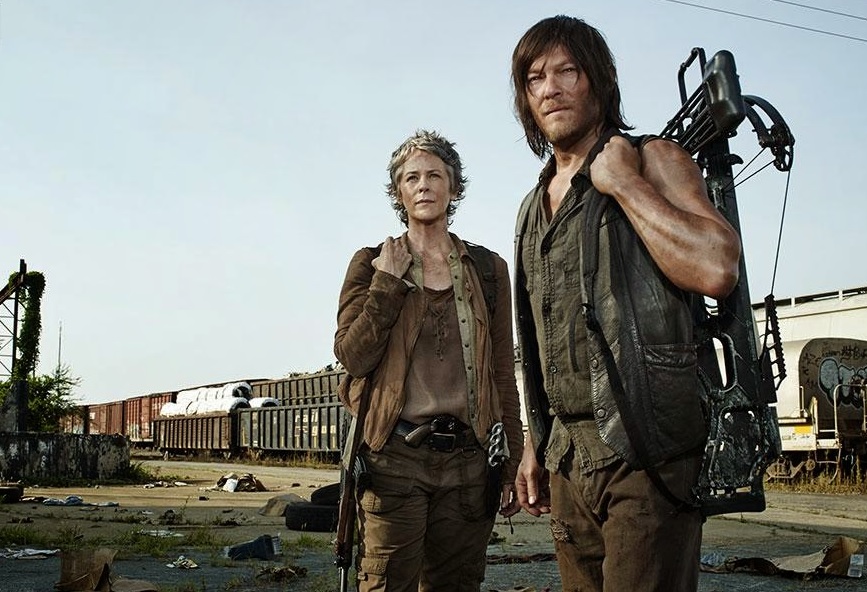 Ever since Gareth and his Terminus crew were brutally murdered by our heroes, the season’s main threat seemingly eradicated right off the bat, the focus of each subsequent episode of The Walking Dead has been placed on individual characters, including Beth and Abraham.

Last night’s episode was all about Daryl and Carol, two characters who share much more in common than rhyming names. Their pasts riddled with sadness and trauma, the two characters are perhaps more tailor-made for the post apocalypse than any others, thriving in a landscape where only the strong survive.

Daryl and Carol are also the two most interesting characters on the show, individually and especially together, so ‘Consumed’ was needless to say an episode I’ve been waiting for. It was slow as molasses, for sure, but further proof that ‘slow’ is not synonymous with ‘boring,’ when it comes to The Walking Dead.

Earlier in the season we saw Daryl and Carol give chase to one of the vehicles from the hospital, a mission to rescue Beth that was the driving force of ‘Consumed.’ More than anything, the episode was about that journey, rather than the destination, the characters realizing things about themselves, and one another, along the way – like any good road trip.

Though they were hot on the tail of one of those vehicles with the white crosses on the back, nightfall forced the two to hole up until daylight, and it was Carol who led them to the safety of a temporary housing building – where she had stayed with Sophia one night, pre-apocalypse. Carol was abused by her husband, Daryl was abused as a kid, yadda yadda. They’re similar and stuff.

Traveling from building to building, bonding and disagreeing on art along the way, Daryl and Carol eventually crossed paths with Noah, none of them having any way of knowing that they were all in the midst of the very same rescue mission…

Noah got the upper-hand on Daryl and Carol, pointing a gun at them and insisting that they hand over all of their weapons. After taking Carol’s gun and Daryl’s crossbow, Noah used some nearby zombies as a barrier of sorts, unleashing them from tents so that he’d have a clear path to freedom.

While he ran away, Carol pulled a handgun from her back pocket, and attempted to shoot the fleeing Noah. Daryl, however, wasn’t down with killing Noah, and intercepted the shot. “He’s just a kid,” Daryl insisted, despite the fact that Noah stole their weapons and basically fed them to walkers.

Is Daryl going soft? Well, it’s more that he’s trying to hold on to the last shreds of his humanity, which was an overall theme of the episode. Just because the world has gone to shit doesn’t mean humanity has to go to shit with it – though I totally would’ve killed Noah.

3) DARYL ALMOST KILLED NOAH. AND THEN SAVED HIM. AW.

After plummeting off a bridge in a magical van with cat-like reflexes, Daryl and Carol caught up with Noah, in a building across from Grady Memorial Hospital. No longer playing the ‘nice guy’ role, Daryl trapped Noah under a bookshelf, and had no plans of stopping a nearby zombie from feasting on him.

In a reversal of roles from their previous encounter with him, Carol insisted that they save Noah, while Daryl coldly lit up a cigarette (Morley!) and walked out of the room like a total badass. It wasn’t long before he had a change of heart, however, and fired an arrow through the walker’s head – saving Noah.

It was at this point that all three characters realized they were on the same page, their paths crossing for the purpose of saving Beth as a united front. All grievances were put aside, and the mission continued.

Exiting the building, Carol literally ran head on into the hospital clan, t-boned by a car driven by Dawn. Though Daryl was all set to kill Dawn and one of her men, Noah insisted that they stay out of sight and let Carol be taken to the hospital, as being brought into the nest of the enemy was ironically her only chance of being saved.

Of course, this explains why Carol was wheeled into the hospital at the end of the Beth episode, putting to rest the fan belief that Carol was merely acting injured, to infiltrate the hospital. Needless to say, things aren’t looking so good for Carol, though she seems to have a way of bouncing back from anything.

5) DARYL AND NOAH JOINED FORCES TO SAVE BETH AND CAROL.

At the end of the episode, Daryl and Noah teamed up to storm the hospital, and it looks like they’re going to first head back to the church and pick up Rick and company – Noah being the one Daryl emerged from the woods with, a few episodes back. I’m assuming that the final two episodes of this season’s first half will center on that group mission, with the Grady Memorial crew being the main villains.

While I loved how quickly the Terminus storyline was wrapped up this season, as it kicked the season off on a really exciting and eventful note, I’m not so sure that was a great decision, looking back. Ever since that cannibalistic threat was wiped out, the season has been lacking a real villain, as the hospital clan pales in comparison to the evil of Gareth and company.

In fact, aside from the rapey cop (who’s now dead), Grady Memorial doesn’t even seem like all that bad of a place, as it at least provides a sanctuary away from the walkers. Sure, Dawn is a total bitch-whore, but she seems to really want to help people, and if the price you pay for being helped in this world is getting slapped around every so often… well, it could be way worse.

Of course, it could turn out that Dawn and friends are a whole lot more evil than we’ve seen, but for now it just doesn’t feel like the stakes are all that high. Beth and Carol are technically being held captive, but they don’t seem to be in any real danger inside the walls of the hospital, and right about now I can’t help but wish that Gareth had at least stuck around until the mid-season finale.

But again, I won’t jump to any conclusions here, as things aren’t always what they seem in the world of The Walking Dead.

This season has been all about deeper understandings of the show’s main characters, and though no new information about Daryl and/or Carol was revealed last night, it was nevertheless a treat to hang out with them for an hour and continue to watch them develop and evolve. Carol, in particular, has quickly become one of my favorite characters on the show, and her evolution is undoubtedly one of the most fascinating we’ve seen.

Also want to mention before we wrap up here that I’ve been loving the expansion of scope this season has provided, the various locations serving to show us just how devastated the world has become. ‘Consumed’ showcased that better than any past episode, taking us into the heart of Atlanta and showing us that it doesn’t quite look the way it did when Rick strolled into the city in Season 1. All that demolished scenery was one of the real joys of the episode, for me.

Next week: the residents of Grady Memorial Hospital find out just who they’re fucking with. And it’s not the kind of people you want to be fucking with.