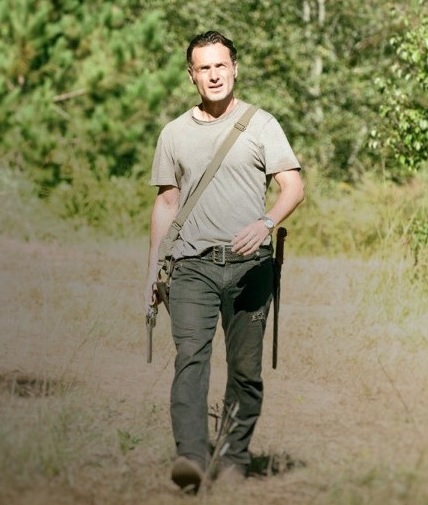 The formula of The Walking Dead is that the show tends to reinvent itself every eight episodes, so that things feel fresh and new each time it returns after an extended hiatus. If last month’s mid-season return didn’t quite do that, and indeed it did not, then oh boy did last night’s new episode.

Like many, I had been somewhat unenthused about The Walking Dead these last few weeks, as Season 5’s latter half kicked off on a fairly familiar note. I was starting to feel like the show was rehashing and regurgitating past themes, ideas and storylines, and I couldn’t help but wonder how much gas was left in the proverbial tank.

But that all changed as Rick and the gang rolled up to the walls of Alexandria, which looks to be the main setting for at least the next handful of episodes. Last night’s hour, titled ‘Remember,’ took those rugged, badass characters we know and love and essentially placed them into the confines of an entirely different show, in the process blowing a much-needed breath of fresh air into The Walking Dead.

Last night’s episode was hands down one of the most interesting hours of the show we’ve ever seen, proving that The Walking Dead is often at its best when nothing much is really happening. Though the action and zombie mayhem levels were relatively low, it was the way each character dealt with their ‘fish out of water’ situation that made ‘Remember’ a genuinely intriguing chapter in the ongoing saga.

Though I mourned the loss of Rick’s beard more than I mourned the loss of nearly all the major characters that have been recently killed off (go figure), it was nevertheless gripping television to see Rick shave, get his hair cut and re-assume his role as a law enforcement officer. For the first time in a while, Rick has found a certain silver lining of hope in the proceedings, though not everyone is as hopeful as he is.

Daryl spent the majority of the episode sulking in a corner and remaining very guarded, refusing to shower or enjoy any of the amenities that come along with living in Alexandria. Meanwhile, Carol put on a happy face and essentially assumed the role of a happy-go-lucky housewife (which she most definitely is not), while Carl is having a rough time acclimating to his new home – like a prisoner who’s been set free and doesn’t know how to handle it.

There was A LOT going on in last night’s episode, from Carl forming a budding, schoolyard relationship with a comic book-reading gal to a general fear within the group that Alexandria life wil soften the rough exteriors that they need in order to survive. Rick, in particular, was on edge throughout the entire episode, hopeful that sanctuary has been found but ultimately unable to completely give in and accept that life is now going to be sunshine and roses.

Rick has become known for spouting off utterly badass lines of dialogue and ‘Remember’ ended with precisely one of those, as he assured the group that they will take Alexandria for themselves, with brutal force, if their new companions don’t stack up. Like many things throughout the episode, it set up an interesting landscape for the future, wherein our heroes could very well become the villains – in so many words, at least.

And then there’s the mystery of Alexandria, as a sense of inner danger was very much hinted at. Though the place seems to be a relatively safe one, it’s not without its potential threats. The seemingly jealous husband of one of Alexandria’s friendliest females is sure to fly off the handle at some point, and then we’ve got the supply run gang, who seem to have a very odd relationship with the walkers. It didn’t take long for those tensions to boil, as Glenn got into a fist fit and Daryl almost choked a bitch out.

Plus: who the hell stole Rick’s gun, which he stashed away in the previous episode?

Though Alexandria bears many similarities to Woodbury, it is ultimately a wholly different location for the show, as it has allowed us to view the characters in an entirely different light. Though many fans were likely bored by last night’s episode and hopeful that things return to normalcy real soon, I can’t help but hope that the writers play around with Alexandria a whole lot more, and don’t feel the need to confine the storyline to a few episodes – like they did with Terminus.

In many ways, ‘Remember’ was a bold and ballsy reinvention of The Walking Dead, and one of the most downright refreshing episodes in the show’s entire run. It was truly unlike any episode of the show we’ve ever seen before, and it couldn’t possibly have come along at a better time. For the first time in a while, I’m once again excited about the future of The Walking Dead, and that’s pretty, well, exciting.

Now grow that beard back, Rick. I miss it already.