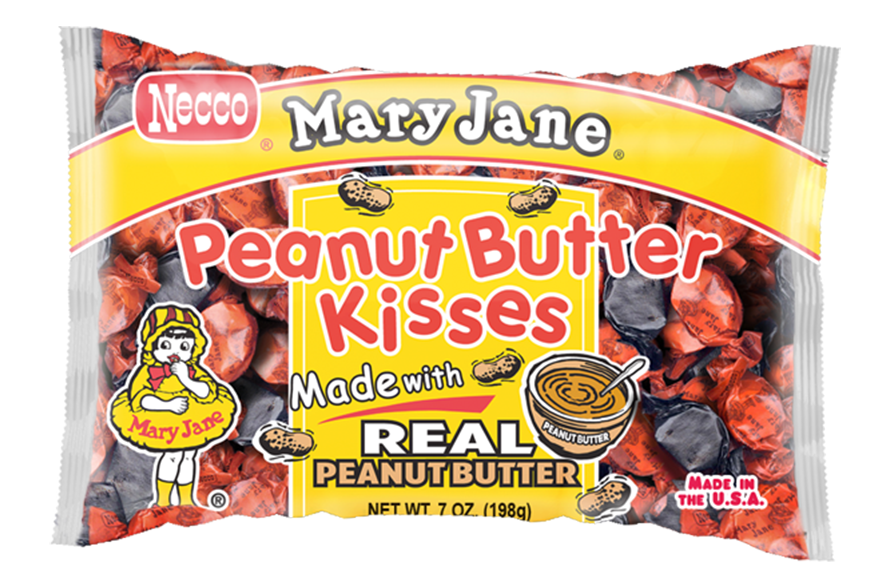 With Halloween nearing, I felt it was time to talk about Peanut Butter Kisses, the oft-maligned candy that tends to be the last eaten of many kids’ trick or treat bounties. You know the ones. They come in orange and black wrappers, and they’re really thick and stick to your teeth. They’re not like Sugar Daddy or Milk Dud sticky, but the harder ones will give your jaws some exercise.

Peanut Butter Kisses aren’t exclusive to one brand. Necco, Melster, and others make them. They’re something of a generic candy, which doesn’t help with their reputation. If you ask me, they’re significantly better than some of the other candies made by these companies. Have you ever had Necco Wafers? Gross. How about Circus Peanuts? I’m happy to say I’ve never gotten any Circus Peanuts in my Trick or Treat bag, but next to Good & Plenty, Necco Wafers are pretty much the bottom of the barrel.

Peanut Butter kisses are on pretty much every Internet list of the worst Halloween candies.

“It’s not that we’re too good for them,” my wife tells me. “It’s that they’re not good enough for us.”

Well, I’m afraid I’m going to have to stick up for them. Are they in the echelon with fun-sized Snickers, Butterfingers, and Kit Kats? Of course not, but I’m happy to give some love to the orange and black treats, and will proudly consume at least a few of them each year. Well maybe proud is the wrong word, but…I like them. Get off my back!

I wanted to use this opportunity to really delve into the origins of the Peanut Butter Kiss, but it’s shockingly difficult to find much in the way of history on these things. It doesn’t help that there are peanut butter cookies with Hershey Kisses in the middle taking up all the search results, though they are admittedly better tasting.

As I said, the Peanut Butter Kisses in question are made by different brands, including Necco and Melster. I know that much. I reached out to Necco for some backstory on a couple different occasions, only to be ignored. Perhaps they didn’t think I was taking the candy seriously, and only wanted to contribute to their bad internet reputation. I tried to convince them otherwise, but I just didn’t get a response. That’s why I have no reservations about declaring my hatred for their shitty wafers (I do have much love for the Clark Bar, however).

I was able to get in touch with Cyble May, who writes the blog CandyBlog.net, and has written about Peanut Butter Kisses in the past. May tells me, “Necco didn’t always make them. They bought the rights to Mary Janes in 1988 when they merged with Stark.”

Ah, Mary Janes Peanut Butter Kisses. A strikingly similar treat to the Peanut Butter kiss, but with more of a standard molasses flavor, and a bit harder to chew. I stopped by Dollar Tree to pick up a bag as I’d never actually tried them. That assessment pretty much covers it. I also approve of those. They remind me a bit of the molasses cookies my mom used to make. They’re so sticky that I assume it’s not uncommon for a bit of wrapper residue to remain on the candy. I’m only mildly ashamed to admit that I gave up, and went ahead and included that residue in a bite. Fuck it. How much worse for you can it be than the candy itself?

As May mentioned, the Mary Janes are more stiff and solid than the Kisses, which are more like taffy.

Here’s a snippet from a blog post of May’s from 2006 discussing Peanut Butter Kisses:

The molasses taffy is soft and flavorful, with a rustic taste of mellow molasses with a little smoke and woodsy maple in there. In the center (or somewhere near there) is a pocket of peanut butter, a little crumbly and of course nutty and roasty tasting. The salty hit of the fatty peanut butter is a great combo with the sweet taffy. I much prefer them to the traditional Mary Janes, which I find not only a little too hard but also not enough of a “concentrated peanut butter” dollop.

Since these are not a spectacularly popular candy, with their rather mousy wrappings and bland colors they’re easily found dirt-cheap in the remainder bins after Halloween, which is when I prefer to buy them. If they’re a little old and stale, a little warm-up in the palm of your hand will revive them.

Sounds like good advice to me. I’ve never heated up a Peanut Butter kiss with my body heat before, but Halloween is approaching, and there’s a first time for everything. Now, I’m starting to wonder how they’d do in the microwave.