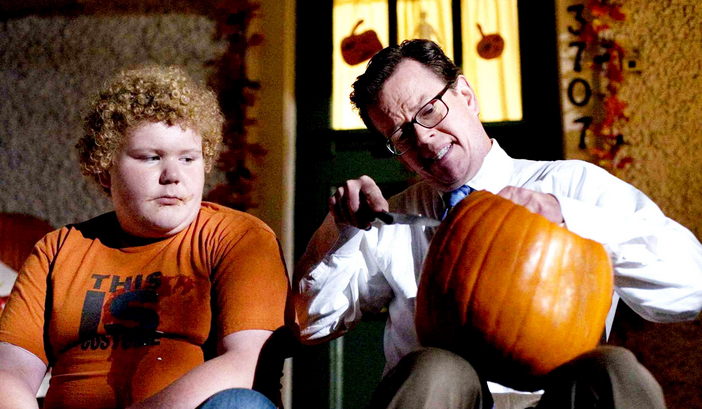 It’s time for another very real phobia and a look at the horror movie moments that sufferers would be wise to avoid. This week it’s the turn of Emetophobia, and here is a little online info that explains more:

Emetophobia is an intense, irrational fear or anxiety of or pertaining to vomiting. This specific phobia can also include subcategories of what causes the anxiety, including a fear of vomiting in public, a fear of seeing vomit, a fear of watching the action of vomiting or fear of being nauseated. Emetophobia is clinically considered an ‘elusive predicament’ because limited research has been done pertaining to it.

I know someone who lives with this phobia and it’s not much fun. There are several constantly updated websites that have guides listing which movies feature vomiting scenes so people can prepare for / skip those moments if they choose to. My friend is only really troubled when the vomit visually appears genuine and lifelike so let’s face it, this is a list of examples from HORROR … there isn’t much here that will look like a normal ‘head down the toilet’ trip.

If any of this does look familiar, go see a doctor … NOW!

We’ve all been there, that bloated, painful feeling you get when you have scoffed far too much chocolate or candy. But for one day of the year it’s almost expected. Halloween isn’t complete until you have a really good stomach ache. What you don’t expect is a little poison in your treats! Poor Charlie, the end result looks like a chocolate fountain. That kid had the stomach capacity of a Rhino!

What makes this scene special is the incredible NOISE the creature makes as it regurgitates a belly full of bones down into the pit where it ‘stores’ bodies to be consumed later. It’s a cross between a long satisfying belch and listening to someone suffer after eating bad seafood. Then, seconds after it has finished it just starts eating again … Could have at least brushed its teeth first!

Blood puke! … SO much blood puke. I was only going to include one of these but couldn’t decide which, so they jointly hold the number eight position. Anthony Hopkins receives a decent mouthful directly in the face, but poor little Olivia (Jessica Lucas), from the Evil Dead remake gets an absolute deluge … and it just keeps on coming. I hope fake blood tastes good because that went everywhere!

Seth Brundle’s slow transformation into a big ass fly was filled with depressing little moments for the guy, not least of which was the gradual loss of all his teeth and the discovery that his stomach could no longer digest the food he ate. No problem, acidic vomit to the rescue! Perfect for reducing donuts to easily consumed sludge, and very handy when you want to maim an intruder.

This is what happens when you swallow a worm that is possessed by an ancient evil spirit, and we all know what goes in has GOT to come out! Craig T. Nelson really sells this scene well, clutching his stomach and acting like he is in genuine agony. The end result of all his high quality heaving is a horrific little skeletal demon that snarls then disappears under his bed … Easier to clean up later I suppose?

This movie is just overflowing with various forms of vomiting, but when you’ve been cursed by a gypsy I suppose weird stuff is to be expected. We start with Christine (Alison Lohman), getting a face full of mud and worms during a dream sequence. Next she has to deal with a corpse leaking its ‘dead juices’ into her mouth, and finally she gets in on the action by showering her boss with more vivid blood puke. Raimi must have a retch fetish.

This one isn’t visual, you don’t actually see any barfing on screen. But you hear it, and what happens next is … unpleasant.

To cut a long story short, Asami (Eihi Shiina), is a very disturbed young woman and other than a phone and a large cloth sack, her apartment is empty. The sack contains a terribly mutilated man who is released every now and then to be handed his dinner. Problem is, Asami is obviously having some cash flow difficulties and instead of just buying the dude some McDonalds she serves up the contents of her own stomach, in a dog bowl. Which must taste ok because ‘sack man’ seems to love it!

For once a ball-gag does what you would expect it to do … it makes someone gag. But for Paxton (Jay Hernandez), that’s good news. His would be killer clumsily slips on the fresh puddle of bile and moments later our hero is free (missing a few fingers and probably feeling a bit queasy) … but still, free!

Again I’ve been a bit cheeky and slipped two choices in here. They both represent fine examples of explosive projectile vomiting and both find their targets with spectacular results. Father Damien Karras (Jason Miller), gets his now legendary face full of pea soup, and in Daybreakers a volunteer vampire utters the classic line “I feel fine” during a medical procedure just before giving the nurse stood next to him a bile bath. A few seconds later he actually explodes … so chances are he wasn’t feeling fine at all.

1. City Of The Living Dead (The Gates Of Hell).

Good old Fulci, just having someone bring up normal vomit was never going to be enough for him. So what he created is a moment that even I still find hard to watch despite years of horror gore experience. In this very inventive death scene, Rosie (Daniela Doria), vomits up her entire digestive tract while bleeding from the eyes. If you haven’t seen it then nothing I say here can truly describe just how gross this looks. It could very well make you feel sick. So a worthy choice for the number one spot.

Any scenes that I missed? … Drop a message below and let me know!