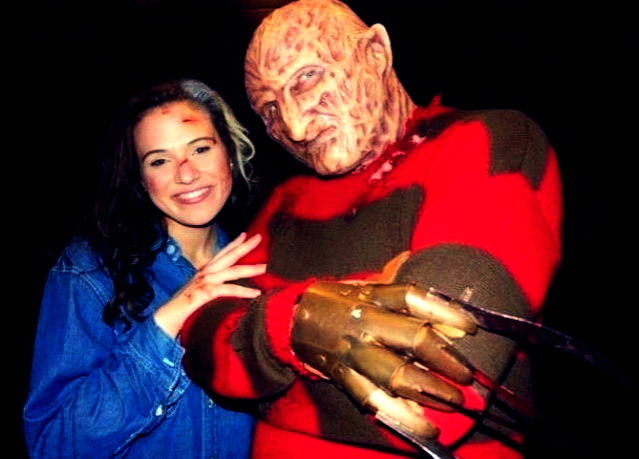 As someone who frequently attends horror conventions, I’ve always been fascinated by the dedicated fans who dress up as their favorite characters, taking pictures with fellow fans and acting like the heroes and villains that they love and admire.

What compels them to do it? And why have they chosen to dress up as the particular characters they dress up as? These are the questions we set out to answer in the new Halloween Love feature Interview with a Cosplayer, where we sit down for intimate chats with the men and women who give us all a chance to meet and greet our favorite big screen icons.

Well, sort of, at least.

Our first interview subject is Ohio-based cosplayer Diandra Lazor, who has become known in the horror community by the handle ‘Nancy Thompson of Elm Street,’ due to her remarkable likeness to Nightmare on Elm Street‘s iconic heroine.

Who is Diandra Lazor, when she puts down the coffee pot and takes off the costume? Let’s find out, in the inaugural edition of Interview with a Cosplayer!

HALLOWEEN LOVE: Are horror movies a lifelong passion of yours?

DIANDRA LAZOR: Actually, no. I used to be terrified of just about everything (Jeepers Creepers destroyed a year of my 7th grade life)! Although, I can’t say I’m surprised I ended up here. I was born in October and have always had a fascination with the macabre. I remember loving to read R.L. Stine books and watch the old monster movies, including Jaws, and occasionally peeking at whatever flicks were on TV. That’s how I first came across A Nightmare on Elm Street. The scene when a crispy Marge was descending into the foggy bed was always on TV and it never failed at giving me the worst nightmares. It wasn’t until the summer of 2007 that I had a realistic dream about Freddy and woke up madly in love with the Nightmare films. 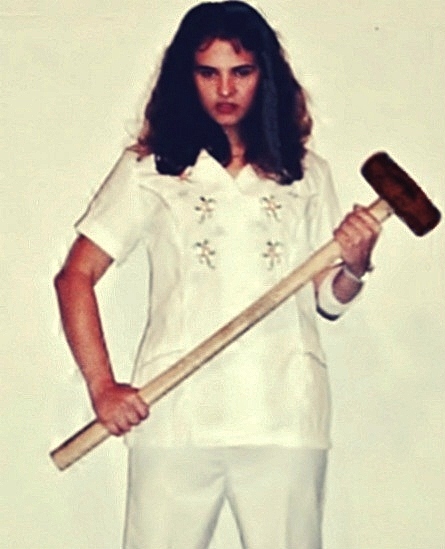 HALLOWEEN LOVE: What was it about the character of Nancy Thompson that you were so immediately drawn to?

DIANDRA LAZOR: The first time I watched Elm Street all the way through there was something about her. She was a really inspiring character, someone unlike any other character before; I felt this instant connection to her. She was a normal teenager, with brown hair like mine, about my age, yet she had this inner strength. She strived to fight back, even if it was alone. She never backed down from what was right. I also absolutely loved how she set up her booby traps. No superpowers needed, just her brains and whatever she could find. It made me realize that even I could be a heroine.

HALLOWEEN LOVE: When was the first time you ever dressed up as Nancy?

DIANDRA LAZOR: The fall of 2007, which was the Halloween after I first saw the film. My parents kept telling me that no one would know who I was, but I told them that I didn’t care because I knew. I was a proud fan and nothing could stop me. So, I put a collage together for reference, knowing people wouldn’t have a clue who she was and I set off on my merry Nancy way. My pajamas were so simple, but to the point. Looking back, I laugh at the lack of detail. Had to start somewhere! 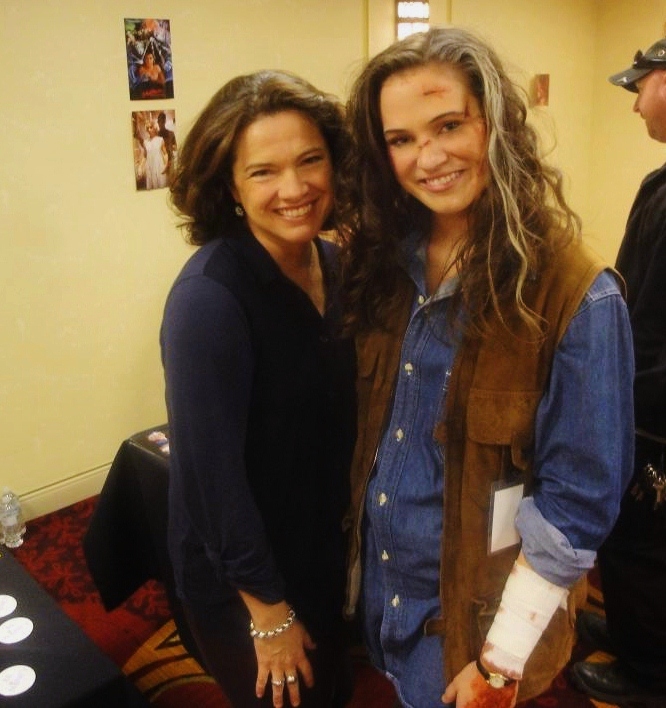 HALLOWEEN LOVE: What was it like meeting Heather Langenkamp, while dressed as Nancy Thompson?

DIANDRA LAZOR: Amazing! Heather is the most enthusiastic person to see me in costume. She loves snapping photos of me and checking out my outfits. I first met her at DAYS OF THE DEAD in Indianapolis back in the summer of 2011, my first convention ever!

It was a wild ride. I had been invited to interview her a few days before and was surprised to know that she knew exactly who I was. She had been asking where I was at the convention and just loved to see my pajamas. She was so loving, encouraging, and happy to see me. She’s still the same way and even more so every time I see her. Having played the most important character of my life aside, as a person, Heather is one of the greatest people I have ever met. She is inspiring in every way. Without her influence, I wouldn’t be the person I am today and for that I am more thankful than I can express.

HALLOWEEN LOVE: Have you had any strange interactions with fans, while in one of your Nancy costumes? Tell us about ’em!

DIANDRA LAZOR: Oh boy. I may have to think about this. Strange, I can’t really say. I guess that would be people thinking that I believe I’m Nancy or Heather Langenkamp #2. That has never been my intention nor a goal. I believe in playing a character to the fullest, but I am the best me there is and will ever be. I love Heather and Nancy and most people are friends with me because they do as well. It actually bothers me to hear that because I have always stressed that it isn’t what I’m about. I have grown to understand that not everyone gets it and that’s okay. I try to explain as best I can, but sometimes it doesn‘t click. Life goes on and I just keep doing my thing.

I have had some really great moments! Last year in Indianapolis at DAYS OF THE DEAD, I was dressed as Nancy from the scene in Nightmare 3 where she stabs Krueger with the shard of glass, and I was speaking with a friend whom I had met on Facebook. His son saw me and smiled brightly, yelling “NANCY!” Like seeing characters at Disney World. It really moved me.

There are so many more. Too many to mention. I’ve had a lot of incredible moments that I’m extremely thankful for with my fellow fans. Including having many of them tell me that I have changed their lives and inspired them. That’s part of the reason why I set out to cosplay and do what I do. I love passion and I absolutely want people to feel it, express it, share it, and be proud of it! 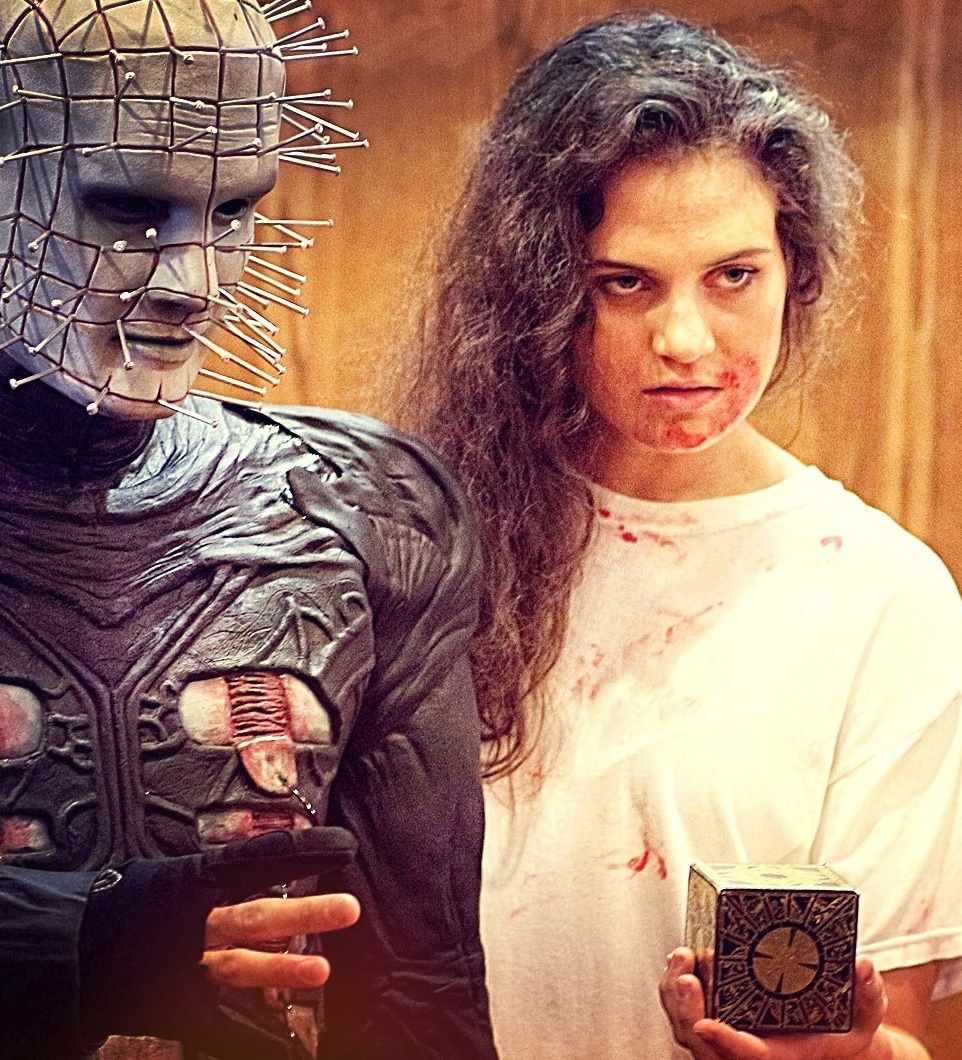 HALLOWEEN LOVE: Are there any other characters you currently cosplay as?

DIANDRA LAZOR: Yes! I also cosplay as “Kirsty Cotton” from Hellraiser and am in the midst of my first non-horror character, “Regina Mills” from ABC’s Once Upon a Time. Things slowed down for a while, but I hope to pick up the pace again.

HALLOWEEN LOVE: What about other female characters from horror movies that you’re inspired by, and would love to someday dress up as?

DIANDRA LAZOR: Definitely! Lots of incredible women of horror out there. I love Sidney Prescott as well. She’s also that girl next door who fights back. She shares a lot of similarities with Nancy. Plus, my hair is shorter now so I won’t need to worry about a wig. Would love to dress as her from the end of the first Scream. Love me some blood! 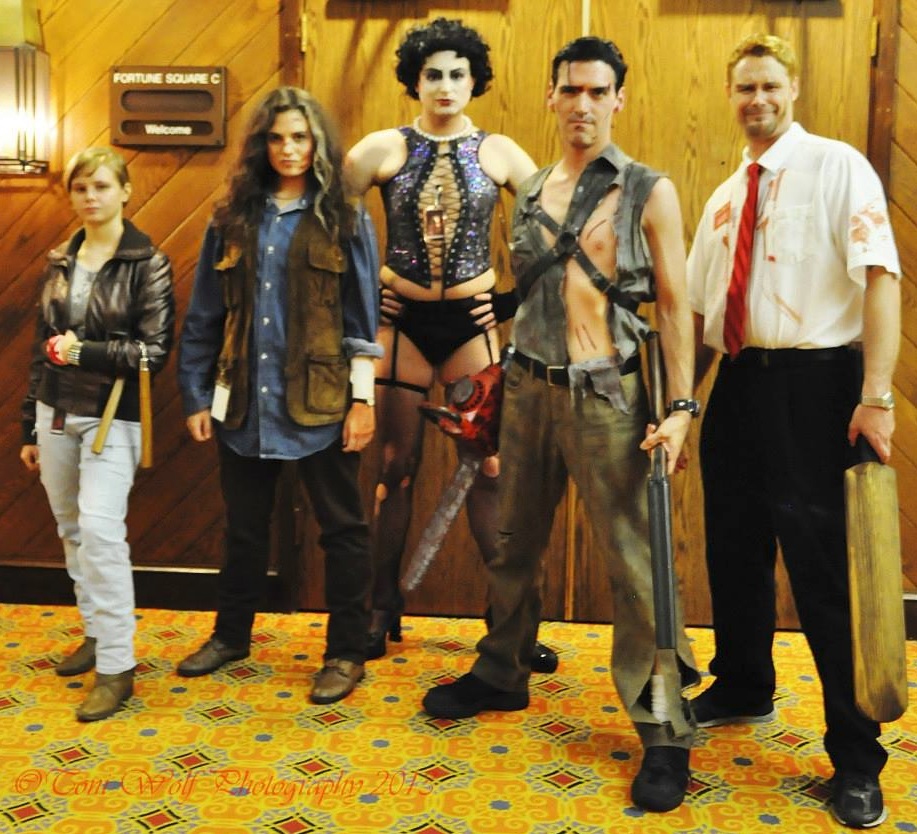 HALLOWEEN LOVE: You’re a member of the cosplay group Heroes Within Us. Can you tell us a bit about that?

DIANDRA LAZOR: It’s a group that I started back in 2012. I love the monsters, I do, but I really love the heroes of the horror world and I know others do too, but I never really saw them cosplayed or given the spotlight. I wanted to change that and DAYS OF THE DEAD thought it would be a great idea so they adopted my idea of a counterpart group to their amazing MONSTERS AMONG YOU, which highlights incredible costumers of the famous baddies we all love. In addition to costuming, I wanted us to become real heroes. So, we have done food drives and clothing drives at DAYS OF THE DEAD conventions as well as doing small acts of good in everyday life and posting them to AnonymousGood.org which is a very inspiring site. We have lots we want to do and are on Facebook for those who want to learn more or join us.

HALLOWEEN LOVE: Many fans have expressed their disgust with the way Nancy was portrayed in the terrible Elm Street remake. What are your thoughts on that?

DIANDRA LAZOR: Have they ever! I have talked this to death, but I was not happy. Nancy Thompson is such an iconic heroine and I know they changed her last name, but the name “Nancy” is so important to the Nightmare world as well as the entire horror genre. As big as a fan that I am of Nancy Thompson, I still had high hopes. She wasn’t a heroine. Even without the iconic nature of “Nancy”, Holbrook was a disappointment. She lacked something that made her unique and memorable. I know there are fans out there who do love her, and I respect that, but I don’t feel the same. 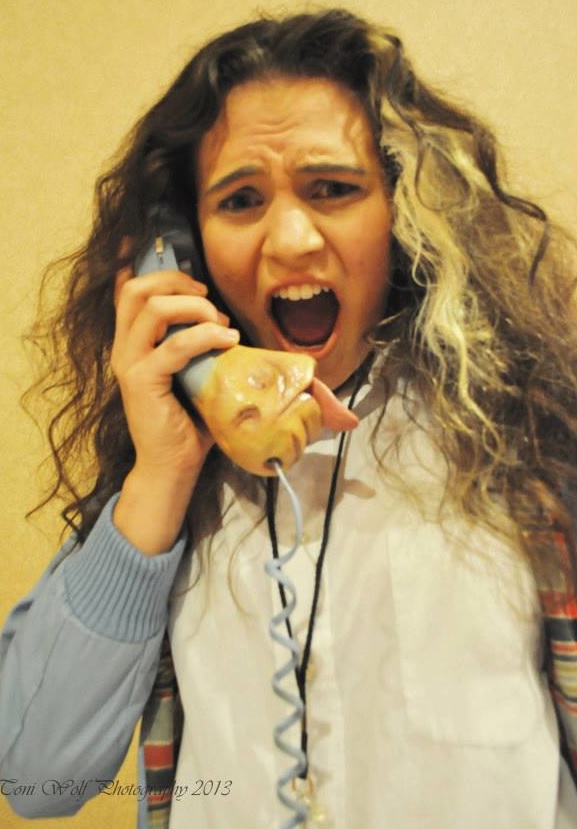 HALLOWEEN LOVE: Cosplaying oftentimes get a bad reputation, with many wondering why people feel the need to dress up as other people, outside of Halloween. What do you say to people who look down upon what you do?

DIANDRA LAZOR: I’ve always believed that it’s a living tribute, like fan art. So much time, money, and effort goes into bringing the character to life. It really is an act of love. And to see these characters come to life on the convention floor is so exciting. It brings the experience to a whole new level, like stepping into the films. Everyone who is at a convention is there because they love horror. We wouldn’t be spending so much of our resources on it if we didn’t! We can truly be ourselves with people so much like us. It’s exhilarating. And, I can’t deny, it’s nice to escape the stresses of life. Being in costume is like acting, bringing another person to life. It’s fun and different! It’s also incredible to see the looks on everyone’s faces when they are wowed by a costume.

People also sometimes don’t like using the word “cosplay” or being referred to as a “cosplayer” for whatever reason. Because I love all types of cosplay and I have looked into the origins of cosplay, I do not mind it. Cosplay to me can be a variety of things. Yes, there are levels of cosplay, but people who hardcore cosplay, make some of the most beautiful pieces of artwork I have ever seen. It is a true art.

So, whether someone is a cosplayer, a costumer, a whatever, or thinking about trying it, do it. Don’t like it? Stop. Love it? Keep going. Don’t let anyone tear you down. My last rainbow kisses and unicorn stickers moment is that cosplay, at the root of it all, is about fun. Don’t let height, weight, color, gender, or anything stop you. I’m a perfectionist, but I ultimately do this for my fun and the fun of others. If you’re hoping to make a living out of it: have fun doing it, work hard, and great things will come. Go kick butt!

Many thanks to Ms. Lazor for taking the time to answer our questions. You can learn more about Diandra over on her website and Facebook page, where you’ll find more images of her costumes as well as a list of upcoming convention appearances!