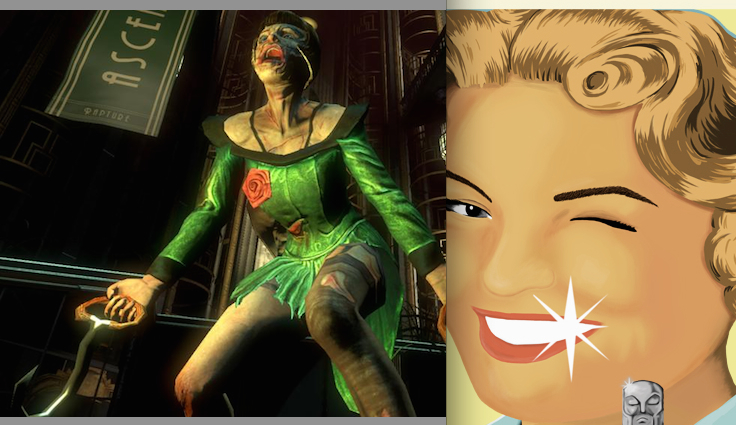 One of the most intense horror experiences I have enjoyed in recent years didn’t come from a movie or TV show … It came in the form of a video game called Bioshock and its sequel Bioshock 2.

Bioshock is pure horror, the undersea city of Rapture that you have to survive a journey through is your worst nightmare come true. Decayed, dark, creepy, blood drenched and inhabited by mask wearing, DNA enhanced psychopaths called ‘Splicers’, who will laugh at you just before they try to gut you with a fish hook.

Everything within the game is designed to unnerve you, if you’ve never played Bioshock it can be tricky to explain but the best way I can describe it is to think about the Overlook Hotel from The Shining and how everything within that hotel started to look and feel creepy. Pictures on walls, the architecture, the classic music that plays when Jack talks to the ghosts from the past … that’s how you feel in Rapture. It’s decadence that has descended into chaos and murder.

This creepy vibe is only increased by the damaged evidence of what the city used to be like before everything fell apart and nothing does this more than the wall posters and advertisements that can be seen throughout every level of the game. They often feature happy illustrations proudly advocating the use of ‘Plasmids’ and as you discover very early in the game it was mostly the use of these body altering chemicals that reduced Rapture to the hell on earth we know and love. 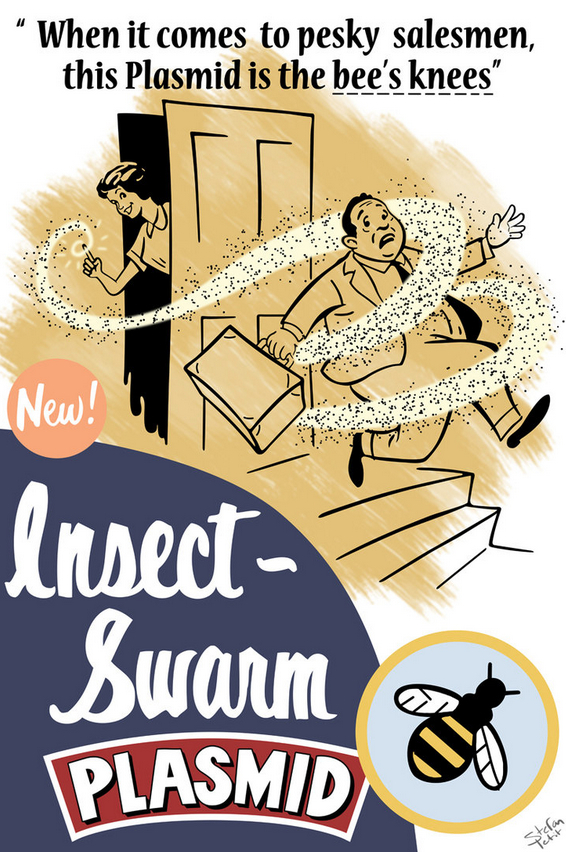 My interview today is with digital artist Stefan Petit. A few years ago he embarked on a personal project to recreate many of the poster designs found within the game simply as an “artistic development” project. The end results were incredibly accurate and perfectly captured the haunting feeling they were designed to create … however, Stefan would discover that the project had unexpected after effects and its legacy is something that he touches upon during the questions. 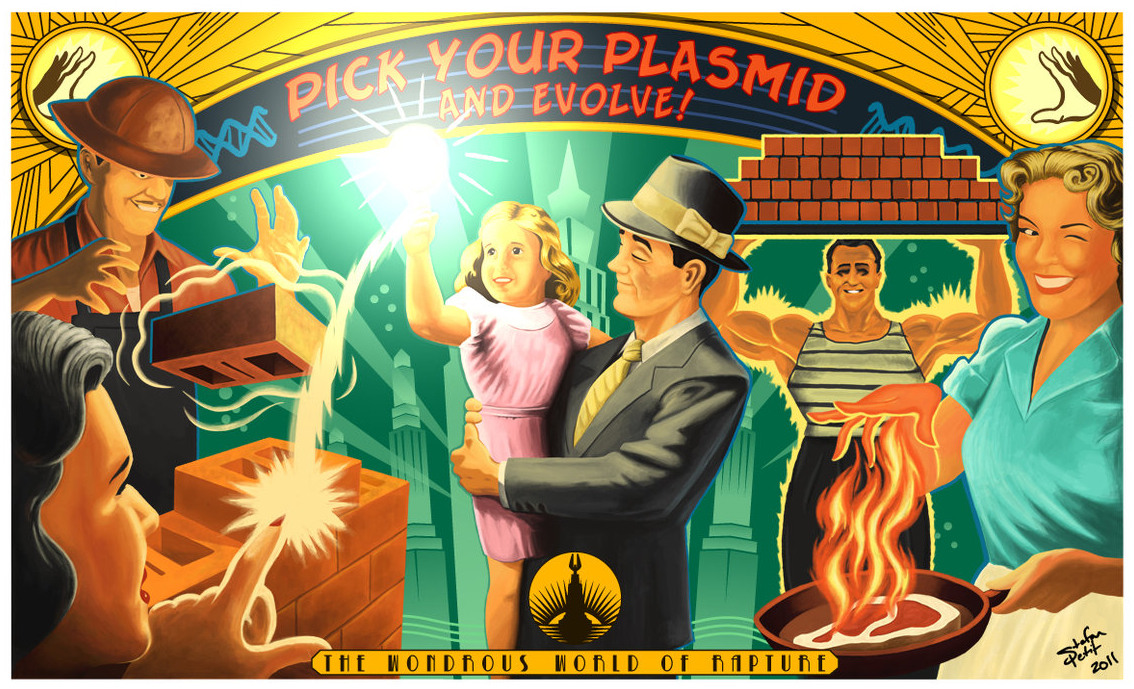 1. Can you tell me a little about your artistic / creative history, was it a destiny from a young age?

“I’ve always liked art and video games, so I’ve always known that I would get into it I just didn’t know what field or how. So in college I got a BA in Graphic Design. I would have liked to get into the entertainment industry with games or movies, but back in high school or college it was never really brought to my attention how or where to make it happen … like it was some sort of mysterious fantasy that I read about in books but was never able to make it a tangible reality. So after a year or so I wasn’t really happy with my career and dug deep into finding out how and where I could make Entertainment Art. So now I’m out on the West Coast in one of the few schools that teach solely Entertainment Design.”

2. I contacted you because of my passion for the Bioshock games … can you tell me how you discovered them and what you think about them?

“I had always heard the Bioshock games were good but never got into them until a friend asked me to recreate one of the posters. So during my college years I played through the first one then eventually the second. I regret not playing them sooner.”

3. The whole Art Deco vibe Rapture had, combined with the darkness and decay just seemed to make everything creepy and unnerving, is that a fair description?

“Yes, I think we are all familiar with typical art deco advertisements of happy housewives and nuclear families enjoying Coca-Cola with these superficial smiles on everyone’s face. I think that accompanied by the utter decay and debauchery Rapture went through is what gives it that creepy, ironic, smiling murder-clown vibe that gives us all chills.” 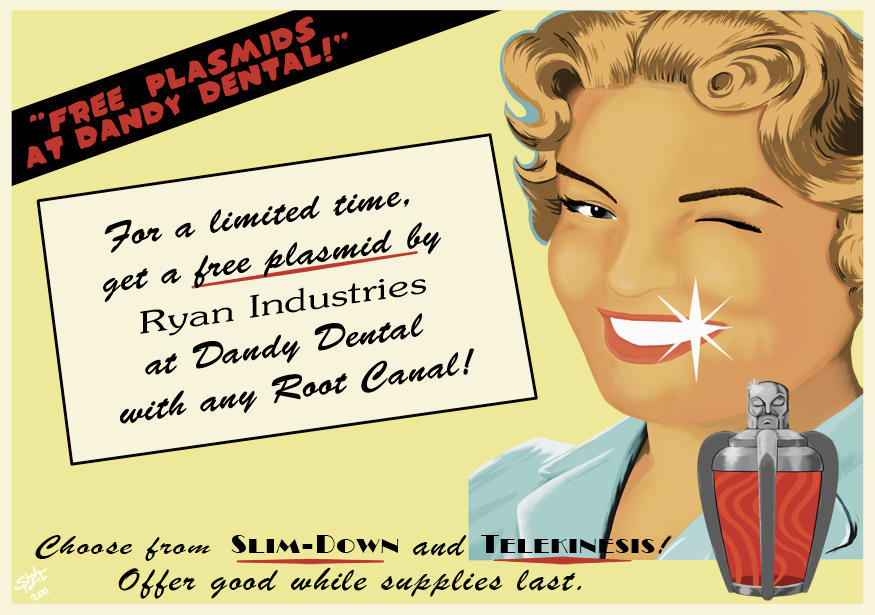 4. You embarked on a personal project to recreate many of the posters and advertisements that could be found within Rapture, can you tell me a bit more about why?

“As mentioned previously, a friend asked me to recreate one of the posters, seeing as how Bioshock never really had that much merchandise available to the public. So this request gave me the urge to play through both games then before I knew it I was taking screenshots of everything, getting completely immersed in Rapture … so I went on this crazy little quest to recreate some of my favourite art from one of my favourite time periods. I knew I would enjoy it and that it would help me grow as an artist.”

5. Do you have any favorites among the designs … Something you just think is visually special?

“I would have to say that most of the posters from Bioshock 2 were extremely fun to recreate. Specifically the ‘Injection’ and the ‘Apollo Air wreckage’ paintings. Those gave me my first experience with digital painting and got me really interested in the medium. They made me want to be a better Fine Artist. the ‘1959 Masquerade’ and ‘Pick Your Plasmid’ are pretty good too, those seem to be fan favourites as well.” 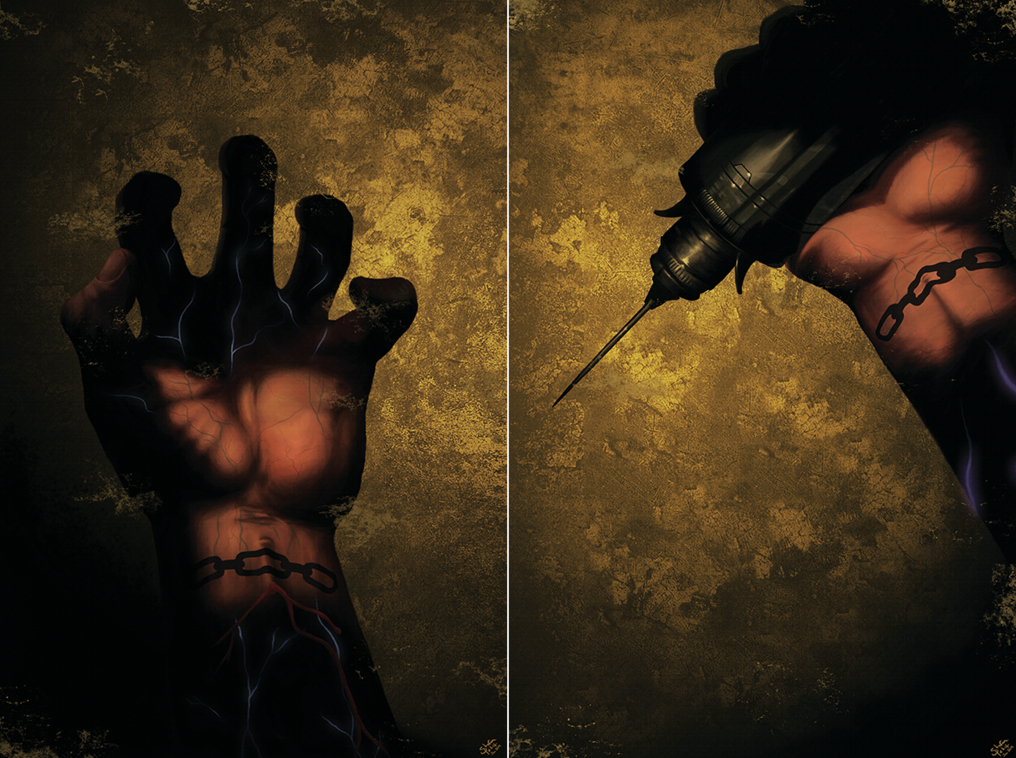 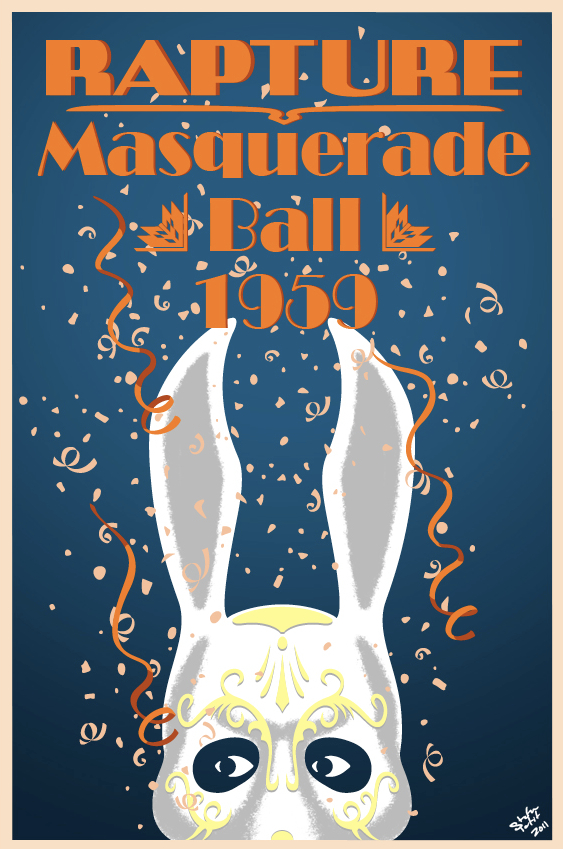 6. Do you think Bioshock has the potential to be made into a memorable horror movie?

“I think they would do amazing on the big screen, however I doubt they ever will. Maybe simply because the games did the storyline justice, they were extremely well written and did something to the player that a movie probably couldn’t duplicate. I know there are many fan made movies though … a lot of talented people have some stuff up on youtube if fans are looking for something to fill that gap in their lives.” 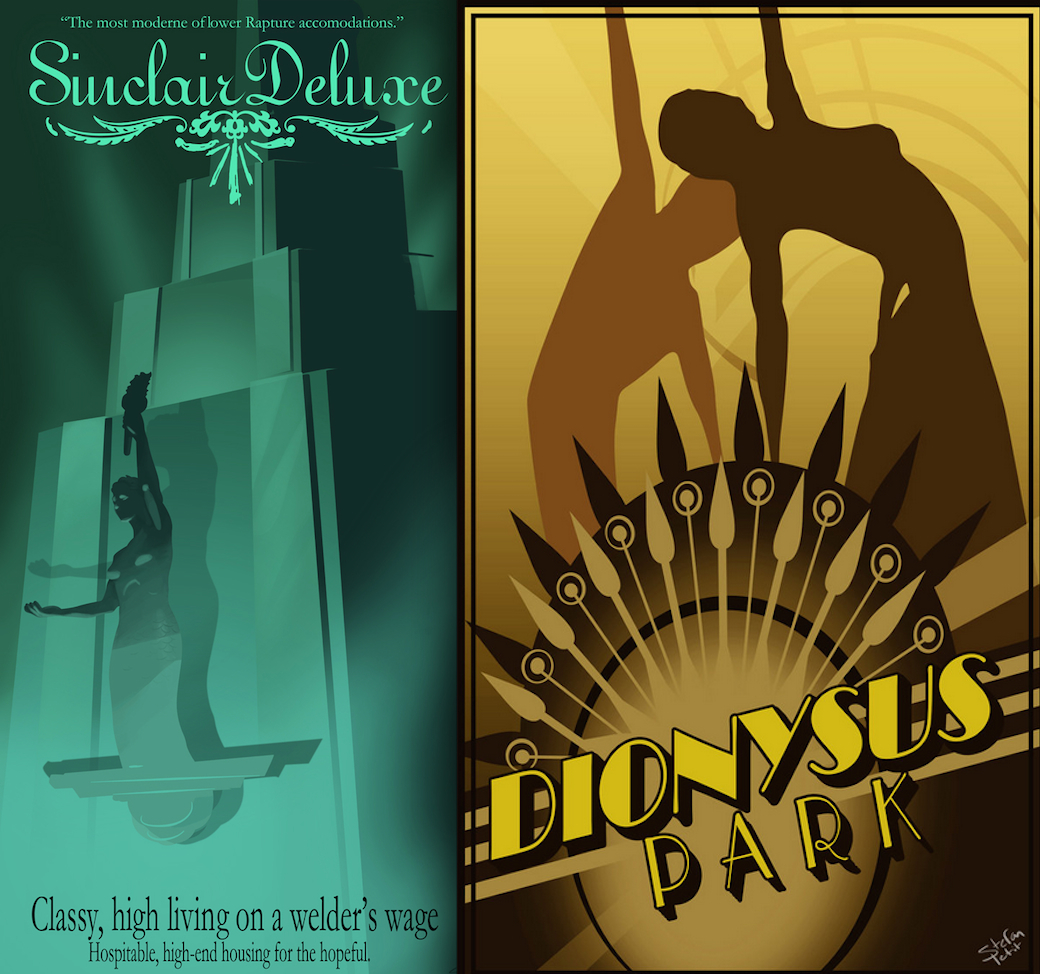 7. Finally, despite the frustrations involved would you consider another project like the Bioshock art project in the future?

“Probably not, unfortunately. I got what I needed from recreating the artwork and I think I realised it was time after I did the last batch that I should be focussing on my own creative work, and that I’m much closer to evolving into a better artist from working on such an awesome project. I either got lots of interest from fans wanting posters and hi-res files … or a lot of hate from people who thought I was trying to take credit for 2K Games creative work, and it only hurt more when I knew I wouldn’t be able to give out those digital files due to all the red tape. No artist wants to be sued, I only wish I was successful in getting through to Ken Levine and finding out what freedom I would have in either giving them out to fans or even to Irrational/2K.”

You can find much more of Stefan’s work here … Check it out when you can, It really is worth a look! 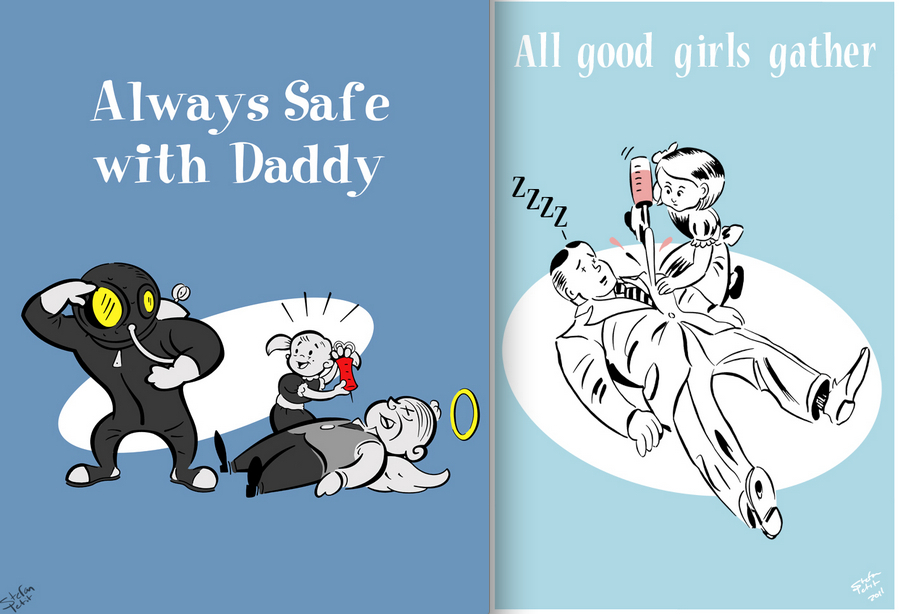 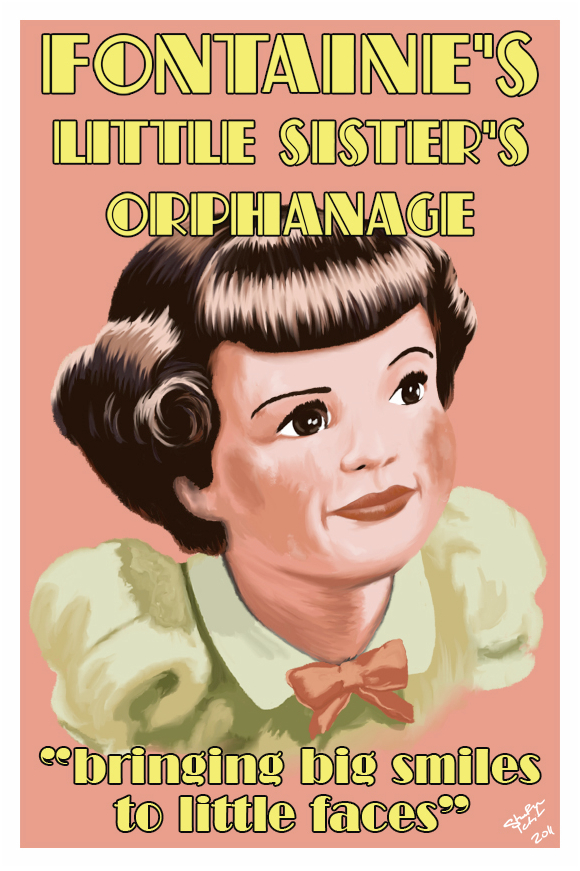