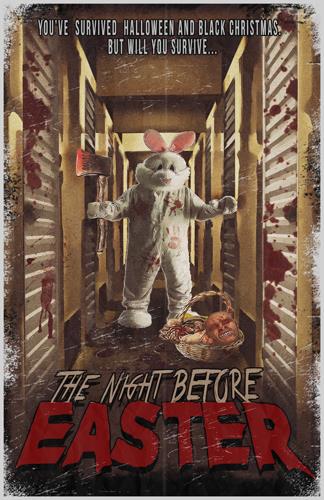 I love spring. Not as much as fall, as that is the time most associated with horror, but spring is enjoyable. Flowers bloom, things start to warm up and, of course, Easter. Not too many horror films take place during the season, but a new one has been added into the fold.

The Night Before Easter, a film by directing duo Joseph Henson & Nathan Johnson, tells the story of a group of friends, led by Kelly, reunited for one night, to celebarte Kelly’s new job in London. Bunking up in their friend Kyle’s dad’s storage facility, they grab a few cases of beer and play Hide & Seek. But a malevolent force is hacking his way through the lockers, dressed in a bunny costume. Not only is it the night before Easter, but the ten year anniversary of the murder of two teens. They were killed by Alex Sykes, former family man turned serial killer. Now, Alex has escaped again and these friends must band together to survive if they ever want to make it to Easter.

While this SOV flick barely misses the 70 minute mark, there is no lack of suspense and fun kills. From the Easter Bunny costume, all the way down to references to Friday the 13th VII: The New Blood and Scooby Doo, this feature runs deep into slasher territory.

While this movie might seem flawed due to its obvious small budget, that paired with its creative deaths, well done practical effects & fresh faced talent (especially April Sinclair‘s character of Elisabeth), gives it a fantastic charm. This movie really felt like an ensemble piece even though most of our characters split up mid-way through. The dialogue feels genuine, no more so than the funny banter between Riley and Dante.

Finishing the film not only with a twist, but a cliffhanger ending, I’m hopping (er, hoping) for a sequel in the near future. Until then, I recommend you watch this fun furry flick. Keep an eye out for all the red “hare”ings. Okay, I better stop. These rabbit puns are breeding like rabbits. Seriously, I’ll stop.