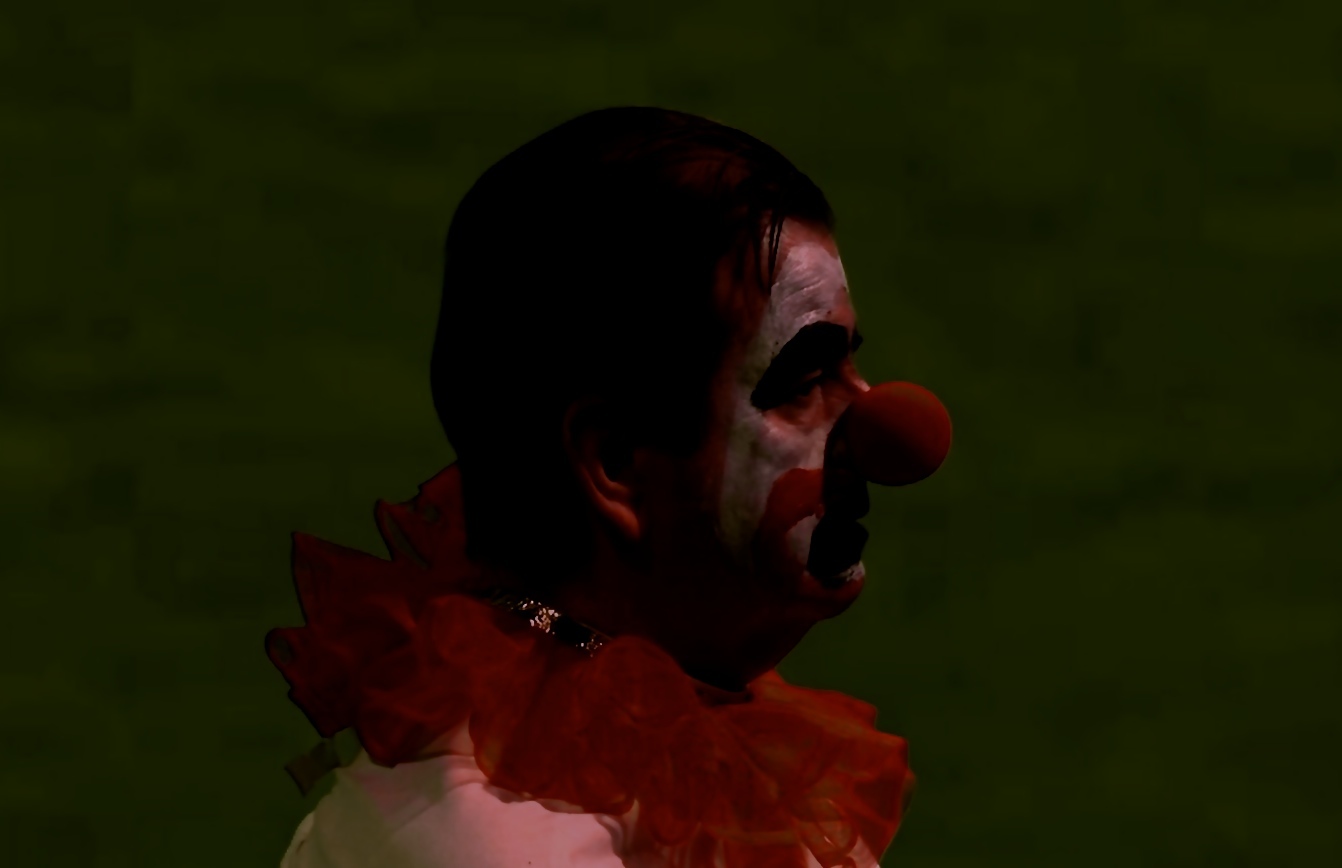 A clown walked up to the gates of Hell carrying a gallon of gasoline. He was bathed in red light from a big sign that read “HELL.” Before entering, he paused. It was hard to believe that he had built this enormous thing. He and Jane.

The first room was meant to look like a cemetery. The Prologue of the Journey into Hell, Jane had called it. Ned felt the grit under his clown shoes. She had wanted it to look authentic, so Ned had obediently shoveled dirt in from the lot. He hated the feeling of it. And the constant stream of visitors spread the dirt to all the other rooms. A hidden speaker played sounds of wind and thunder, accompanied by a sporadic strobe light. The fog machine was missing, ripped from its mount.

Ned dribbled gasoline into a coffin and onto a skeleton whose bones were still labeled if you looked closely. They’d taken Oscar from Jane’s high school, shortly after their first date and laughed as Oscar rode shotgun the entire way back to Ned’s apartment. Jane had named the skeleton Oscar, after a teacher she hated. Not too much gasoline. He didn’t want them to smell it.

He entered the second room through a coffin-shaped door. A cardboard sign above read “ABANDONE ALL HOPE, YE WHO ENTER HERE.” Jane had defended her misspelling of “abandon”, insisting it was archaic. Sometimes, a teenager would loudly point out the spelling error to his friends as if it were the funniest thing in the world.

The room was filled with red lights, and covered in paper-mache brimstone. “You can’t have all these hot bulbs right by all this paper” Kevin had said, running a hand through his blonde mullet. Ned hated the constant smirk on Kevin’s face. “There’s no way I can approve this ride,” Kevin had said. Then he added, still smirking, “Not a chance in Hell.”

Ned was surprised the following day when Jane held up their safety certificate. Despite their fire hazards and the lack of emergency exits, they would soon be on the road with the carnival.

Ned ripped the cardboard sign down from the ceiling and tore at it until “ABADONE” became “DONE” became “ONE” became “O.” He pulled a heat lamp and timer from his deep clown pockets and plugged them into a wall and set the timer so that the lamp would turn on tomorrow evening at peak hours. He then buried the heat lamp under the shredded cardboard sign.

The next three rooms were scenes of creative torture, inspired by a field trip to a wax museum Jane had taken when she was eleven. First, there was a woman being sliced down the middle by a slow-swinging axe. Jane named her Darlene, after her mother. Next was a screaming man hanging by a single meat hook through his rib cage. They had named him after a sheriff. And lastly, there was Todd, named after a mutual acquaintance from their small town, being ripped in half by a stretching machine. Ned poured a little gasoline onto each of them.

Ned then walked through a false exit and into a room decorated to look like you were stepping back out into the carnival. It was meant to be like one of those horror movies where the hero thinks he escapes, only to find that he is still trapped in the nightmare. The walls were now dotted with graffiti, but once they depicted a very convincing carnival landscape. In the center of the room, sitting on astroturf and hay, was a large box with a hand crank sticking out the side of it.

Ned approached the box and lifted the lid. It was empty, except for a soiled mat where Ned had spent many hours crouched, waiting for the hand crank to move. Sitting there, listening, Ned could always tell when Jane had abandoned her post at the ticket booth. People became animals whenever they got in for free. And more and more, Jane was leaving the ticket booth.

Earlier today had been the worst it’d been. Ned had heard them coming, several rooms down. “HUH-HUH! ABAN-DUN! HUH-HUH!” they jeered. When Ned finally jumped up from the box to frighten them, he was immediately punched in the face by a skinny teenager. Ned fell backward over the box and onto the floor. The teenagers squealed and pushed each other out as Ned struggled to his feet.

Hell was shut down for the rest of the day and Ned wandered the hot, nauseating fairgrounds, looking everywhere for Jane. All the while, carnival-goers eyed Ned suspiciously, waiting for him to do something either funny or scary. Ned tasted blood and saw red.

He eventually found her in the parking lot. But Ned made the mistake of shouting while still several car spaces away. He couldn’t help it. He saw the back of Kevin’s mullet and he heard Jane’s laughter. The two were sitting in the front seats of a black pickup truck. Kevin turned and saw Ned approaching. He was smirking even then. Ned tried to run but tripped over his clown shoes and ate gravel. People laughed. The black pickup drove away in a cloud of dust. When he got back to the trailer, Jane’s things were gone.

Ned reached into the box and pulled out a metal flask from under the soiled mat. He winced when he accidentally touched the metal to his swollen lip, and then drank from the corner of his mouth. He then placed what was left of the gasoline into the box and closed it up again.

The very last room was full of mirrors and strobe lights. Ned stumbled inside and sat cross-legged. When he looked up he was amused to find a room full of clowns. Their faces smeared with makeup and dirt, their bottom lips all swollen. The clowns flashed in and out of existence to the rhythm of the strobe light.

“To the only people I trust,” Ned toasted, raising his flask to his reflections. They did the same, and then each drank from the corners of their mouths.

Ned drank until the flask was empty. He then began to laugh, thinking about the teenagers that would come in the next day. They would see the “FREE ADMISSION” sign and come stomping through, mocking every detail, saying things like “SO FAKE!”, thinking that they were in no real danger. Ned laughed so hard that his jaw began to ache.

He thought about Kevin losing his license. He would probably go to jail. Jane too. He laughed until he could hardly breathe, until his chest felt like it was being squeezed, until something was very wrong.

Ned looked up and saw the clowns starring back at him. Their faces had changed. Their smiles had grown sinister. Some of them seemed to be inching their way closer, and others seemed to be whispering to each other. Ned could hear their murmurs. They were going to jump out and grab him, and keep him here while the place burned down.

Ned wasn’t about to let that happen. The exit was only ten feet away.

Then Ned jumped to his feet — at that same moment, so did all of the clowns.

He made it through the exit, but collapsed onto the grass. No one came to Ned’s assistance. The carnival was dark and empty. Ned made no other movements under the red light of “HELL.”