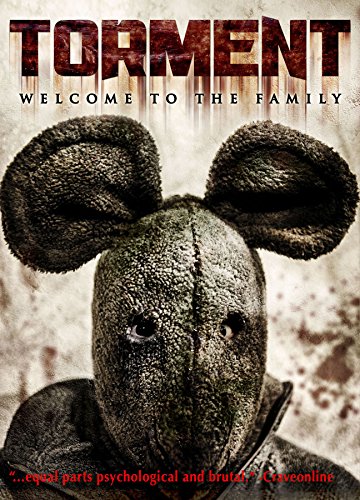 A family is terrorized in their remote home by a band of intruders, who just so happen to be wearing some pretty creepy masks.

Not only is that the general premise of notable recent films like You’re Next and The Strangers, but it’s also more or less the set-up for every other home invasion film we’ve seen in the last several years.

And Torment, available on DVD July 15th from Vertical Entertainment, is no different.

Modern day scream queen Katharine Isabelle stars alongside Robin Dunne in this latest entry in the home invasion sub-genre, playing newlywed couple Sarah and Cory. With Cory’s seven-year-old son from a previous marriage in tow, the couple vacations to a remote home that Cory owns, with the hopes that the getaway will bring the newly-formed family together.

Unfortunately, this being a horror movie and all, their vacation quickly takes a turn for the horrifying, when they realize that another family has been living in the home. And despite a local police officer’s insistence, they’ve got no plans on vacating the premises…

If there’s any strong suit of Torment it’s the first 20 or so minutes, which are spent on establishing the three main characters and their individual dynamics. This ‘getting to know you’ portion of the film works quite well, as the characters are all fairly likeable, with the foundation properly laid so as to make you actually care about what happens to them.

Right off the bat, it’s immediately clear that seven-year-old Liam does not accept Sarah as his ‘mother,’ so to speak, as he hasn’t yet fully come to terms with the fact that his real mother is dead. Sarah, on the other hand, is desperate to become accepted by Liam, which puts Cory in the awkward position of being a dad who is essentially caught between two worlds. Again, it’s interesting stuff, and a good enough job is done in establishing the characters that they feel like real people, rather than horror movie victims.

On the other side of the coin, the villains that are terrorizing our protagonists are pretty damn creepy, wearing masks of various different animals. OK, so the whole animal mask thing is certainly nothing new, but Torment at least attempts to add a new layer to that overplayed cliche, by having the family of killers wear handmade masks that are stitched together from the heads of Liam’s beloved stuffed animals. It’s a pretty cool decision, as the home invaders essentially look like living, breathing incarnations of the monkey, mouse, pig and rabbit that young Liam once found comfort in.

Unfortunately, the downfall of Torment is the same downfall of most home invasion films; it’s utterly derivative and feels so familiar that it’s hard to even care about any of it, despite the fact that you do kinda empathize with the characters. The electricity in the house has been cut, their phones don’t work and the only person who could possibly help them is killed off very early on in the film, with a series of idiotic decisions hampering their survival attempts. It all comes off like Home Invasion 101, for the most part, which leaves very little room for suspense or entertainment.

After watching the film, I couldn’t help but feel bummed out about how much of a missed opportunity it was, given the fact that some interesting attempts are made to deviate from the norm. You could tell that the movie was trying to provide some sort of commentary about family and the need for a child to have a strong father figure, but the motive of the killers and the overall presentation of the story is ultimately far too silly to really be effective, or impart any of the messages it seems to have set out to impart. It never quite goes to any of the interesting places I was hoping it would, which is a damn shame.

One last thing I do want to point out is that the screener copy of Torment that I received was almost unwatchable, due to how dark the transfer was. It seems that Vertical Entertainment was intent on ensuring that nobody would want to illegally upload the film onto the internet, and so they figured that making it barely watchable would prevent that issue from arising. Unfortunately, that decision pretty much ruined any and all possible enjoyment of the film, so all they really accomplished was shooting themselves in the foot.

Nearly every five seconds, the screen would get super dark to the point that I could barely see what was going on, and it was as if the lights on the set kept getting turned off and on, throughout the movie. It didn’t help matters any that the majority of the film takes place at night, rendering many scenes pitch black. I almost avoided even reviewing the movie because I’m fairly sure I missed some potentially effective moments due to the piracy-proofing of the disc. Yea. That bad.

So please, Vertical Entertainment, correct this issue for future releases. I get why you did it, but if reviewers can’t even watch your movies, I don’t expect you’ll be getting many positive reviews.