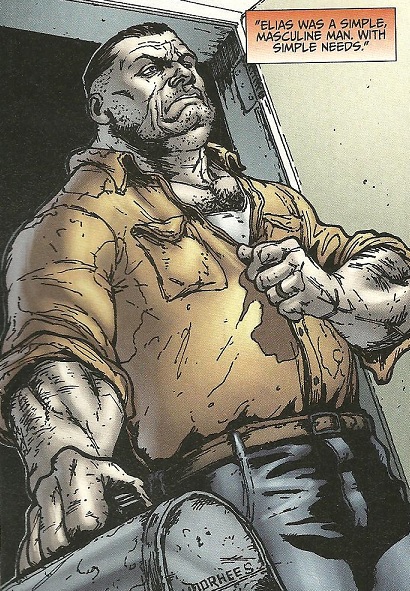 Not only is the first Friday the 13th of 2014 right around the corner but so too is Father’s Day, and what better way to celebrate both holidays than by shining the spotlight on Elias Voorhees, the father of Friday the 13th‘s slasher icon?

No better way, says I!

Despite the fact that the Friday the 13th franchise spanned a whopping ten original films, followed by a battle with Freddy and a reboot, we have never actually met or even so much as heard a peep about Jason’s father, as the focus has of course instead been placed entirely on Pamela Voorhees, the machete-wielding maniac’s loving mother.

But while we’ve never heard about Jason’s dad in the film franchise, the same cannot be said for the series in other forms of media. It was in 1986 that the big guy’s father was introduced in the Simon Hawkes-penned novelization of Jason Lives, referred to simply by the name Mr. Voorhees.

The novel ends with the revelation that Mr. Voorhees has been paying the Eternal Peace Cemetery’s caretaker to take care of the graves of both his wife and son, with Mr. Voorhees making an appearance and discovering that Jason is no longer inside of the casket that once housed him.

Interestingly enough, this aspect of the novelization was taken from Jason Lives writer/director Tom McLoughlin’s original concept for the ending of the film, wherein he planned on adding Mr. Voorhees into the mix. Though the caretaker is killed off by Jason in the film that we all know and love, McLoughlin originally wanted him to survive until the very end, for a scene that would’ve played out much the same way it does in the novel.

Though we of course never got to see that ending, a special feature included on the Jason Lives Deluxe Edition DVD brought the unfilmed scene to life, using storyboards and the voice of the actor who played the caretaker in the film. Check it out below, to get a feel for the alternate Jason Lives ending that almost was!

After another failed attempt to bring Mr. Voorhees to the big screen in Jason Goes to Hell, he popped up again in the 1995 comic series Jason vs. Leatherface, where he was given the first name of Elias – which, as I’ve just been corrected, was a name briefly mentioned in Jason Goes to Hell. The three issue cross-over miniseries featured several flashback sequences which depicted Elias Voorhees as an abusive monster, who often ridiculed and beat his deformed son. 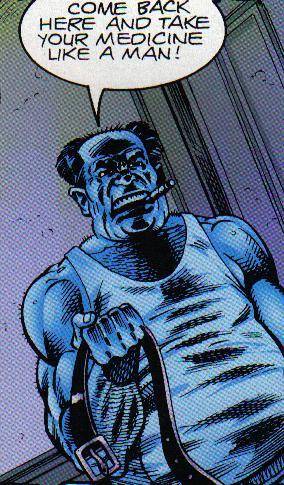 In those comics, we learned that Elias was eventually murdered by Jason’s mother, who used a machete to brutally end her husband’s life. That said, the Jason vs. Leatherface comics have very little to do with either of the film franchises, and it’s interesting to note that Mrs. Voorhees is named Doris in them, rather than Pamela.

In 2007, a two issue comic series called Pamela’s Tale was released, which further delved into the origin story of Jason Voorhees. Included in the Friday the 13th: Book Two graphic novel, Pamela’s Tale serves as a prequel to the original film, with Pamela relaying the story of Jason’s birth to the ill-fated character of Annie – who, in the film, gets her throat slit.

Much like in Jason vs. Leatherface, Elias is once again depicted as an abusive husband (we also learn that he’s a miner), described as a ‘simple, masculine man’. Finally having enough of the mental and physical torment, Pamela kills him in his sleep one night, hacking him up with an axe. Pregnant with Jason at the time, she believes the murder to be the only way to protect her son. After chopping him to pieces, Pamela dumps Elias’ body into Crystal Lake, never to be seen or heard from again.

To date, the Jason Lives novelization and the two comic series’ are the only times we’ve been provided with any insight into who Mr. Voorhees was. But that could change when the upcoming Friday the 13th TV series enters our lives in the near future…

In an exclusive interview with Bloody Disgusting this past May, franchise creator Sean Cunningham teased possible appearances from Elias Voorhees, in the series.

Keeping my fingers crossed about that one, as that’s one piece of the Friday the 13th puzzle that has never been fully explored, outside of the brief appearances I’ve mentioned throughout this post. So here’s to hoping we get to know Mr. Voorhees a little better, once the Friday the 13th spin-off series slashes its way onto television!

Happy Father’s Day to all the dads out there, and happy Friday the 13th to both dads and non-dads alike!