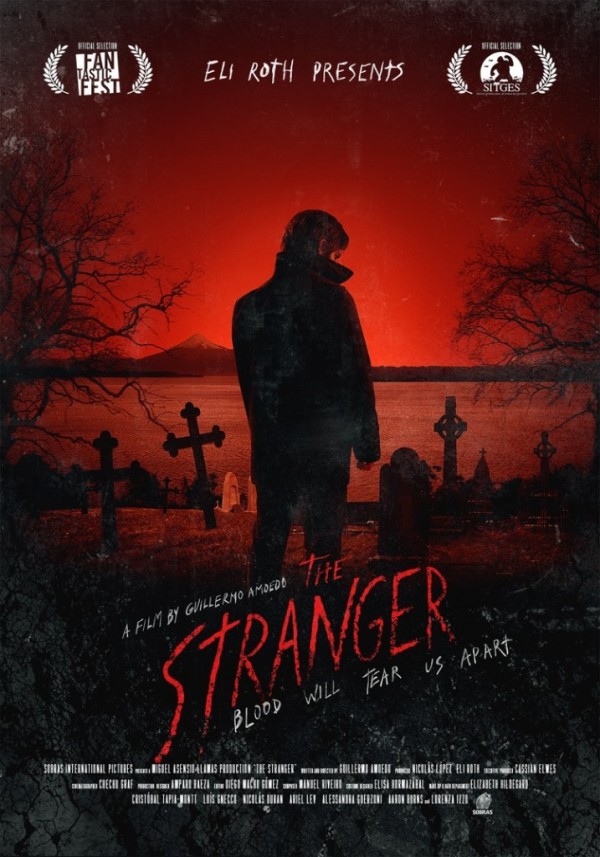 The name Eli Roth has become a fairly respected one in recent years, and that’s why you’ll often find it attached to projects that weren’t actually directed by him. After the success of Cabin Fever and Hostel, Roth found himself not just writing and directing but also producing, and films like Clown and The Sacrament have proven that he knows the right horror projects to sink his teeth into.

The latest film to be presented by Eli Roth is The Stranger, directed by Uruguayan filmmaker Guillermo Amoedo. In it, a mysterious man drifts into a small Canadian town and brings a whole lot of trouble along with him. After he’s nearly killed by a gang of thugs, the man is taken in by a reckless young boy, and the peaceful community almost immediately runs red with blood in the wake of his arrival.

The Stranger is as understated as vampire movies get, as the v-word is never spoken, there’s not a single set of fangs in sight and the curse is treated more like a disease than some sort of evil superpower. True, the titular stranger’s blood heals and his skin burns in the sunlight, and he even has a taste for the red stuff, but this one is anything but a traditional vampire movie.

And that’s all good and well, as we’ve reached a point where vampire movies are no longer interesting unless they bring something new to the table. The issue with The Stranger, however, is that it doesn’t so much bring things to the table as it does take them away, and in doing so Amoedo grabs hold of any inherent joy that the sub-genre brings along with it and completely sucks it out of the proceedings.

Though it has pretensions of being an elevated vampire movie, focused more on human drama than bloodsucking and imbued with a perceived sense of pathos, The Stranger never manages to be much more than a total bore. It’s almost immediately dull and fails to pick up any steam as it goes along, and the overly dour mood certainly does nothing to up the entertainment factor.

The biggest problem with The Stranger is that the characters are as dull and lifeless as the film’s almost nonexistent pulse. Martin, played by Cristobal Tapia Montt, is one of the most uninteresting vampires in the history of vampire cinema, and I blame the script more than the actor’s performance. He just never gets to do much, and it’s frankly impossible to care about the character – or any of the film’s characters, for that matter.

On the subject of the performances, there’s something quite off about almost everyone in the film. From what I understand, all the actors are Chilean but the movie is oddly set in Canada, and their attempts to deliver American accents will make you wonder why it wasn’t just set in Chile – where the movie was shot. One actor even appears to have been dubbed over, and it tends to be quite jarring.

Equally jarring is the film’s poorly thought out storyline, which is constructed around random events that happen solely for the purpose of arriving at a highly predictable destination. The motivations of individual characters never make much sense nor do the situations they find themselves in, and The Stranger is one of those movies where things only happen because it’s convenient for them to happen.

Of course, issues such as these would be forgiven and forgotten if The Stranger had at least provided the distraction of being entertaining – but alas, it does not. Instead of having any fun or embracing the fact that he was making a monster movie, Amoedo instead went the heavy-handed route, and the result is a self-serious slog of a film that’s so uninteresting it almost begs you to turn it off.

Blood-soaked vampire films have perhaps never been as boring as The Stranger. And I as sit here writing up this review, I can’t help but wonder why Eli Roth attached his name to it.