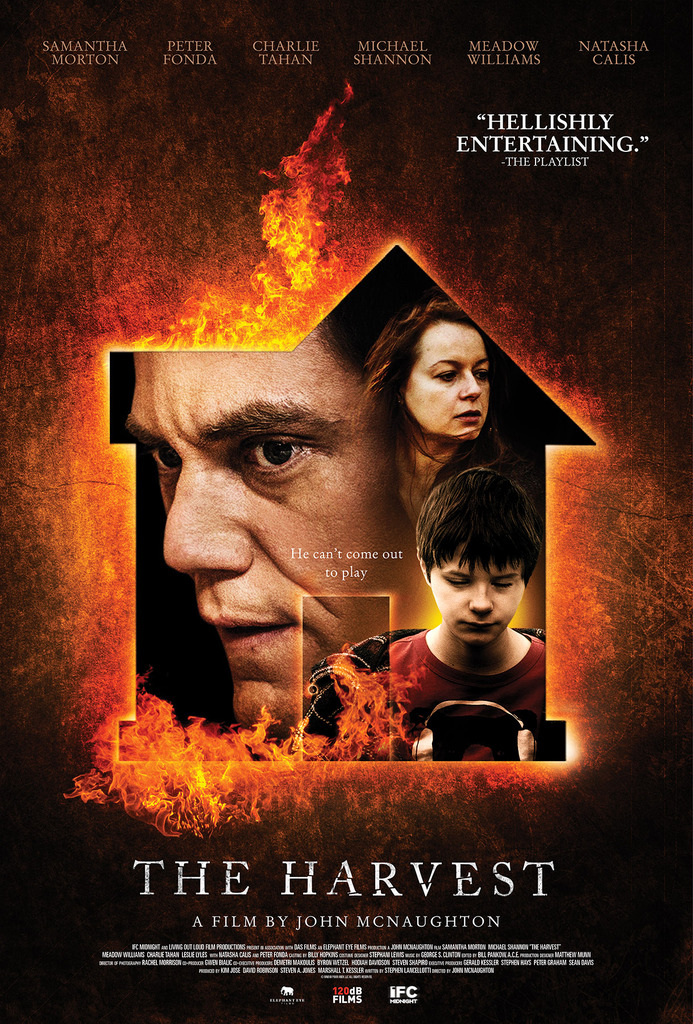 Aside from those two standout gems, McNaughton’s resume includes a handful of made-for-TV movies, which is interesting to note because his latest effort feels like it belongs on the Lifetime network. And yet, it actually wasn’t made-for-TV, despite the soundtrack, acting, and the overall vibe of the film leading you to believe otherwise.

McNaughton’s first film in over ten years, The Harvest stars Michael Shannon and Samantha Morton as the parents of a young boy who’s sick to the point of being bed-ridden. When young Maryann moves in next door and wants to befriend their son, mother Katherine is violently against the idea of him leaving his room, suggesting to the girl that something isn’t quite right about the family’s situation.

The best thing that The Harvest has going for it is the cast, with the two leads each coming into the film with previous Oscar nominations. Shannon doesn’t get to do all that much as father Richard, aside from be submissive and generally look creepy, but it’s nice to see him playing against type as a good guy (sort of) – especially so soon after his roles in The Iceman and Man of Steel.

And then there’s legendary actor Peter Fonda, who plays the grandfather of Maryann. Out of all the actors in the film, Fonda gets the least amount of material to work with, often doing nothing more than delivering totally misplaced lines like ‘far out.’ In fact, Fonda’s character is only listed as ‘Grandfather’ on IMDb, which should give you a good idea of how underwritten the role is – and I’m inclined to believe that Fonda ad-libbed those aforementioned lines, which feel like they belong in Easy Rider.

But it’s Samantha Morton who totally steals the show as Katherine, channeling her inner Kathy Bates for an insidious performance that is also the opposite of what you might expect from her. Throughout much of the film you’re never quite sure if Katherine has the best interests of her son in mind or if she wants to keep him locked up for her own sinister purposes, and Morton is pretty damn creepy in the role.

While the first half of The Harvest leads you to believe that it’s a drama about an overbearing mother who doesn’t quite know what’s best for her son, things get pretty dark in the latter portions thanks to a disturbing twist that earns the film its rightful place in the horror genre. At its best, McNaughton’s latest reminds that the scariest thing about this world is what’s going on being seemingly-normal closed doors.

Alas, not even two Academy Award nominees are able to deliver performances strong enough to make The Harvest anything more than a serviceable movie that probably should’ve aired on Lifetime. If you have a soft spot for relatively cheesy TV movies, as I do, this one is entertaining enough to be worth the watch, but anyone looking for the horror return of the guy who made Henry will surely be disappointed.

Worth noting that The Harvest at times feels like a made-for-TV prequel to Stephen King’s Misery, almost to the point that you can just pretend that it is. It’s not at all hard to believe that Katherine goes on to become Annie Wilkes, and this little bit of mind trickery makes the film more fun than it perhaps really is. So why not play pretend? You’re allowed.

Given the Lifetime vibe and the fact that it’s about the lengths a mother will go to do what she feels is best for her child, The Harvest is – despite its shortcomings – perfect viewing for Mother’s Day. Unlike most movies that actually are made-for-TV, this one can be enjoyed by both the horror fan and the mother who’s looking for a little family drama on a Sunday afternoon. So invite mom over and make a date out of it.

Just keep her away from McNaughton’s previous horror film, will ya?