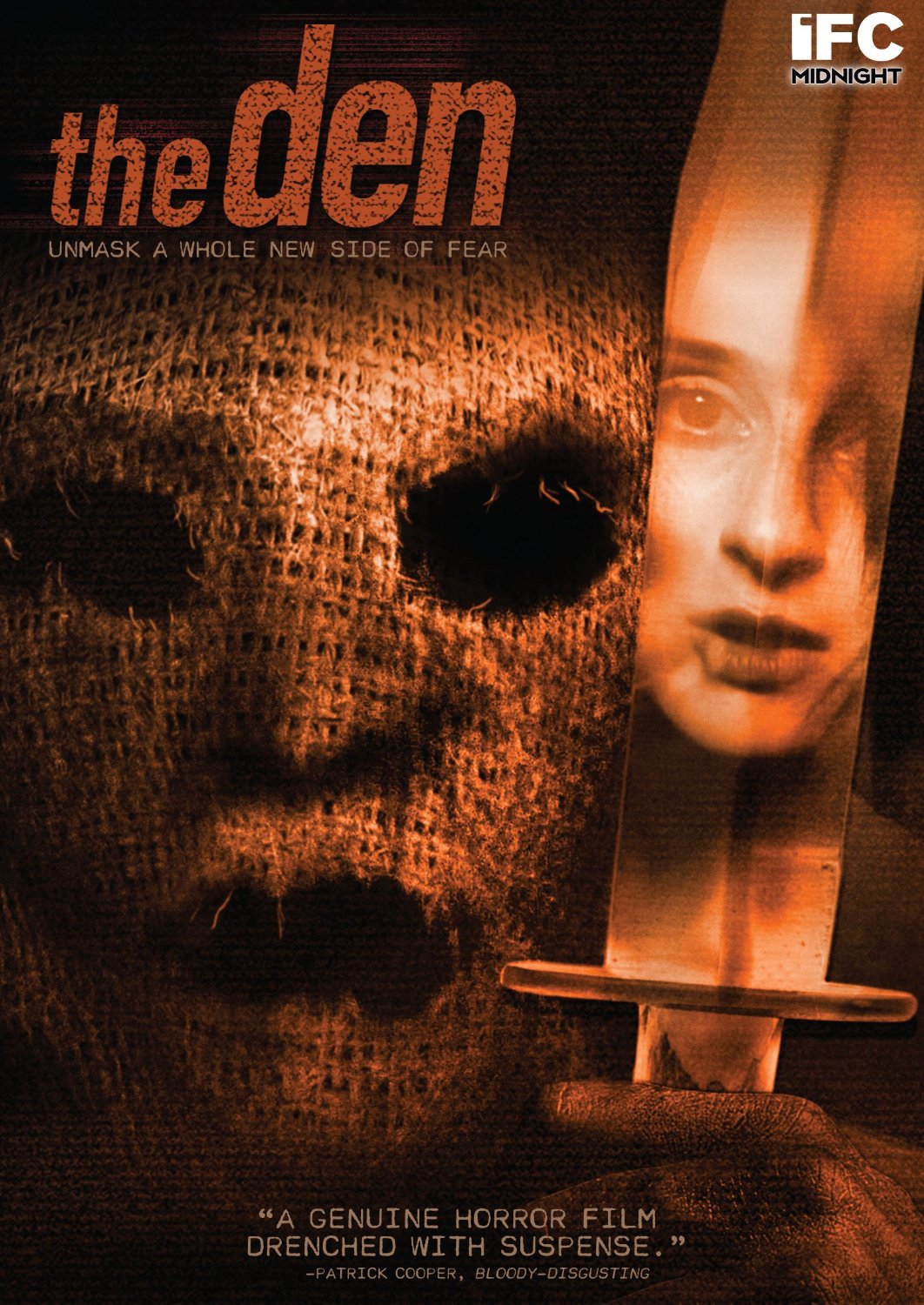 I’ll never forget the night I went on Chatroulette with some friends a few years back, which was equal parts fascinating, disturbing, hilarious and utterly creepy.

If you’ve never been on, Chatroulette is one of many internet services where you can live video chat with people from all over the world, giving you unsettling access to their personal lives – and, of course, giving them access to yours.

Though modern technology is for the most part a wonderful thing, and the internet a place I can’t imagine my life without, there’s no denying that there’s a dark side to all of it, which Zachary Donohue has effectively explored with his debut feature.

Hitting DVD on July 29th, The Den centers on a beautiful young girl named Elizabeth, who is awarded a grant to conduct a social media experiment wherein she will spend the majority of her time on a video chat service called The Den, interacting with as many different people, from as many different parts of the world as possible.

While at first Elizabeth’s experiment is mostly harmless to her well-being, forced to bear witness to the usual sexual antics and various other bizarre sights that anyone who’s played around with these services is no doubt all too familiar with, things take a turn for the horrifying when she witnesses what looks to be the real murder of a fellow chatter, whose throat is brutally slit on camera.

The disturbing video is only the beginning of Elizabeth’s nightmare, as she finds herself, and her loved ones, pursued by the masked man wielding the knife.

Boiled down to its essence, The Den is a slasher film, with young friends knocked off one by one until a single ‘final girl’ is left, who does battle with the masked baddie. But what makes The Den unique is the presentation of that familiar story, which is mostly documented through Elizabeth’s laptop. She’s rigged it up so that everything she sees is recorded on her computer, you see, and we see the bulk of the action through the eye of that on-board webcam.

Yep, it’s another found footage movie, but the concept is clever enough that it doesn’t feel quite as boring or generic as most recent entries in the sub-genre do. True, found footage movies have for years been using webcams to show us creepy shit and ‘oh shit, look behind you!’ kill scenes, but as far as I’m aware, The Den is the first found footage movie to take that idea and expand it to feature length.

In a sub-genre so chock full of movies that bring absolutely nothing new to the table, any little deviation from the norm comes out smelling like a rose and The Den is precisely that deviation, offering up enough of a tweak on familiar ideas that it feels fresh and different.

Thanks to a likeable lead and a very realistic depiction of the internet and the various sorts of people who inhabit it, the first half of The Den is engaging and entertaining, paving the way for a second half that’s suspenseful and pretty damn creepy. Co-writers Zachary Donohue and Lauren Thompson crafted a script that effectively taps into many different aspects of the internet’s dark side, making the film as fittingly unsettling as the internet is fully capable of being.

I’m not going to deny that the latter portions of the film play out in a way that feels a whole lot more generic and conventional than the set-up does, because it ultimately does devolve a bit as the 70-minute runtime reaches its end. Toward the end of the movie, the original concept of everything being filmed from Elizabeth’s laptop is tossed out the window in favor of seemingly desperate ways to show things that couldn’t be seen from that point of view, but somehow it all makes sense and totally works in the end, thanks to a creepy final act reveal that ties the room together better than the carpet did in Lebowski’s house.

Even though the parts aren’t all great, the sum of those parts is actually quite effective and chilling, making The Den one of the better found footage movies to come along in recent years. As described by the producer in a 3-minute behind the scenes featurette included on the DVD, The Den is very much Rear Window for the modern internet age, likely to make you think twice the next time you turn on your webcam and start chatting with a stranger.

In the year 2014, it’s impressive for either a found footage movie or a slasher flick to not blend in with all the rest, and so it’s even more impressive when a fusion of both sub-genres can come off feeling fresh and relatively new. The Den does just that, and for that I’ve got no choice but to respect and recommend it.