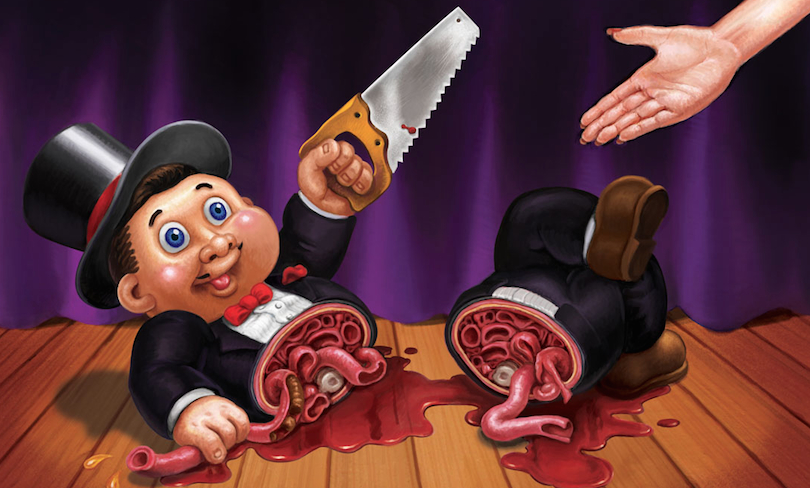 This weeks artistic interview takes me WAY back to those carefree days of youth and features one of my biggest childhood obsessions … The Garbage Pail Kids.

I often talk about the subtle horror that surrounded me when I was growing up and I can’t think of a better example than those awesome little cards that featured death, injury and internal organs every chance they got!

I recently had the opportunity to communicate with Luis Diaz who not only creates his own GPK artwork, but also actually worked on the real things for Topps! … We had a fantastic Q&A about the horror within the art as well as movies and much more … I’ll also be sharing some examples of his amazing work. I think you will enjoy … 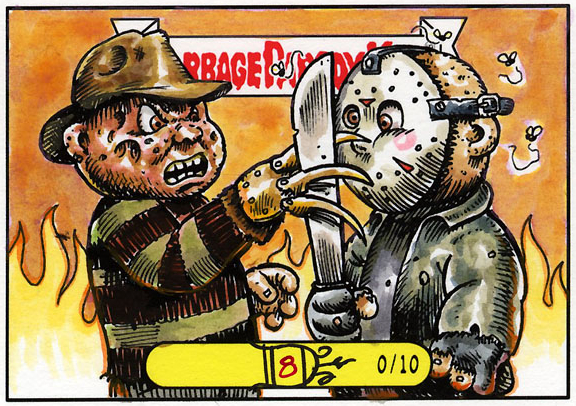 Halloween Love: First of all can you tell me a little bit about your artistic history, was there a talent from a young age?

“I think like most kids I was interested in drawing right away, I had a lot of cousins growing up and when I came to the United States I lived in my Grandmothers house. My Aunt lived in the back and her husband at the time always drew these profiles of cars and I used to go over and try to copy his or make my own. In second grade I started getting most of the poster assignments that would hang around our hallway for events like “Firefighter Week” … My teacher would do the lettering and I’d do the main image that she ‘art directed’. It mostly was a straight copying job of a text book illustration, or something similar. Somewhere in all that I decided that being a doctor was not what I wanted to do even though I liked the name ‘Dr. Diaz!”

HL: You’ve been heavily involved with Garbage Pail Kids art over the years both officially and in your own private work. Are they enjoyable characters to work on? And why do you think they have remained so popular for so long?

“I don’t think they are as popular today as they were when I was growing up in the 80’s, but they were directly the next thing in my development as a young artist sometime in 4th grade. It would later be a huge learning step for me in my professional career, but when I was a kid I would lend my toys (GI Joe’s and Transformers) for a school mates stack of Garbage Pail Kids. It had horror themed cards and kids just getting into some serious shit. I think that was the thing I liked about them most. The gory referencing of movies I hadn’t seen yet and something “real” about the world I still didn’t understand.”

“Jump forward 2 decades and I was working for The Topps Company and I was knee-deep in filth and bodily functions. It was a great thing to be able to do that in your life and do the things you dreamed one day of doing. Of course work then becomes work and the people behind them today aren’t the same goofy folks as before. Everything today is like watered down Kool-Aid. No Guts! Even though I tried to make them as horrific and interesting as I could. Eventually I got bored and I put too many things on my plate and lost my spot with the company. I did my own variations and they even threatened to sue me. How’s that for gratitude? Bunch of Jerks! I still paint them because I love doing them for myself and the small group of fans I’ve accumulated throughout the years.” 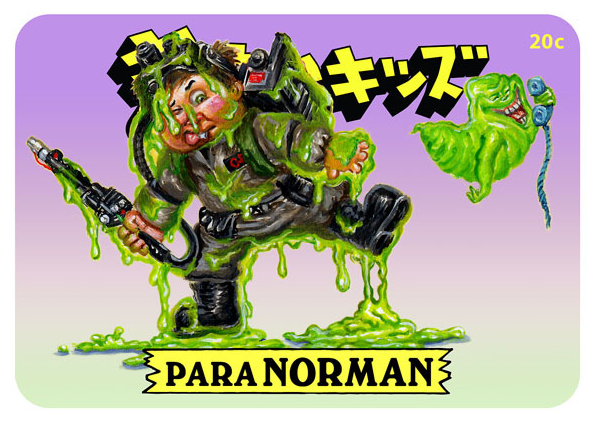 HL: I’ve always thought GPK cards played a big part in my young self developing a love for horror due to the fun but gruesome imagery they feature. Do you think that is a door they opened for many people? … They seem to go hand in hand with horror in a way?

“Well there you go. The horror element it seems was always the driving force of most things I was interested in as a kid. I think I’m really in touch with my own mortality and those kinds of things always seemed to make it easier to deal with the fact that we will all die one day and some of us in a really fucked up way. Because of that fear some people avoid it while others try to cope with it.”

“I find it funny to see adults who can’t see certain movies (including myself). I loved the fake gore growing up, but a lot of the newer movies are too realistic for me. I think visually it’s all amazing, but when the silliness and fun part of the film goes away I think it starts to become a science class or some anatomical study of organs. I liked it when the idea of it was more important than the exact color of a human liver exposed to room temperature. Everything has gotten too serious. Too overly stated and eventually becoming too boring.” 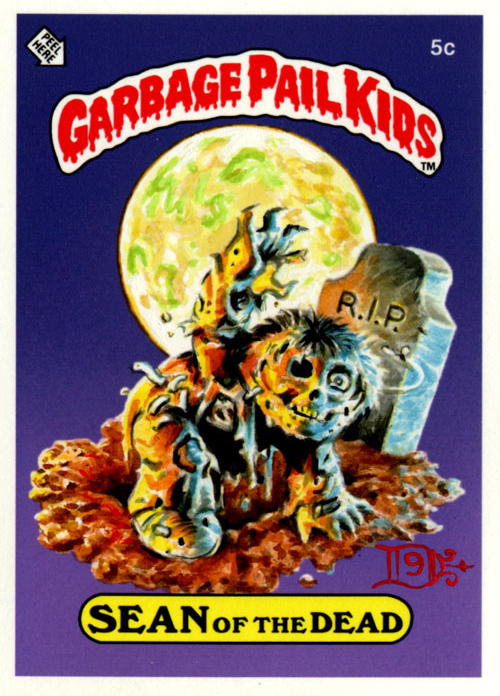 HL: Do you have one favorite GPK card, from the entire run?

“The one card that sticks in my mind at the moment is “TODD da!” which is very close to the kind of cards that appealed to me and I didn’t get so many like that. I was happy to work on that one. As far as a favorite growing up. I think I always liked the electrocuted hair man guy, “Live MIKE.” I think I drew him a bunch of times as a kid. I also liked rock music so it went hand and hand. Rock music seemed to have amazing painted covers from time to time like Iron Maiden and Megadeth. Those would influence me a little later as well.” 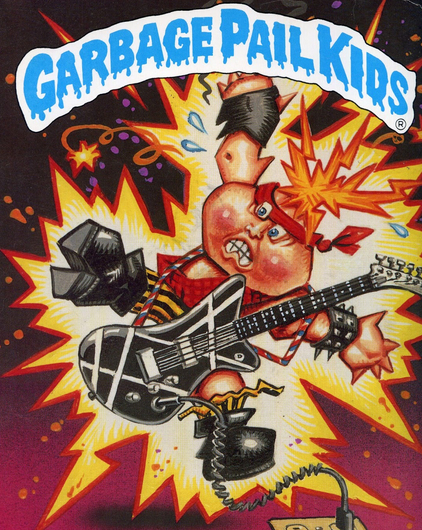 HL: Do you have a passion for horror?

“Horror and humor for me go hand in hand. It’s the yin and yang in my world. Both are enjoyable things for me. Horror reminds me of my childhood and that is why it has a tender place in my heart. I think I like horror because it seems to hit on something personal in everyone. That fear aspect of things. Something real and something you imagine. When the lights go out everything gets turned up with your senses because we can’t see very well. Your brain starts to imagine all kinds of things.”

“I just came back from a short vacation to a cabin on a huge lake, we had to travel on a boat to get to it and there was no electricity running through the place. There was a dozen people or more and it was fun, but around eight o’clock people started to recede into their rooms while others slept outside in their tents. My fiancé and I got a small cabin many yards away from everyone in a small structure built off the side of a cliff. It was an uphill climb and with just a lantern and a flashlight it made for a perfect death scene. My heart was beating louder and everywhere I looked into the dark vastness of the heavily forested area I imagined a pack of wolves or a bear or rabid deer coming after us. I think I didn’t appreciate it as much as I do right now, seeing what a great experience that was for me. I lived in the city in Miami of all places and that kind of fright is hard to have unless there is a hurricane or you fall off your boat into a swamp full of alligators, oh well … I guess it could be dangerous down there too! LOL!”

“Horror is exciting. It’s a natural state of mind and it can be loads of fun. My next set of art adventuring will be full of horror. I’m working on where to go right now.” 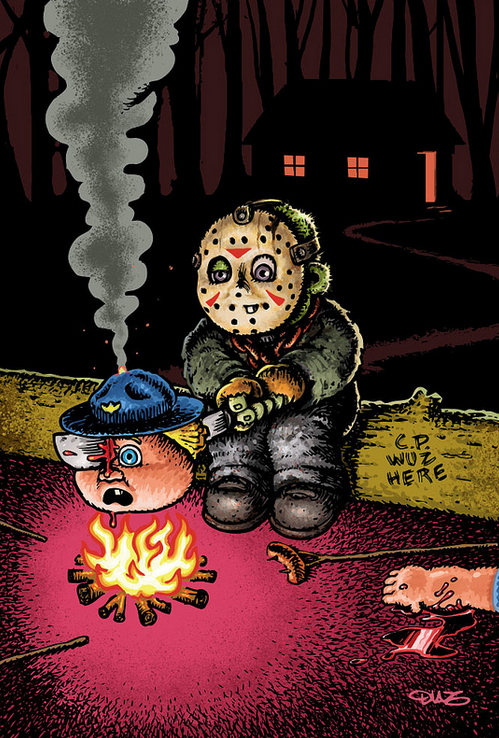 “Yep. I think the old movies from the 80’s and 90’s have been the archetypes of what I think horror movies should have. I think the Scream movies showed you that kind of love for those movies and the elements it required to be fun and interesting. I remember Jamie Kennedy’s character knew all those things I thought were the ingredients for good horror. Some of those movies for me were the Alien(s) movies, The Nightmare of Elm Streets and Friday the 13th. Robocop, Gremlins, Jaws (I lived in Miami!) and Predator. I also loved those slightly off horror films like Little Shop of Horrors that seemed even more horrible because of the comedy and music. I wished they made more of that kind of stuff. All those cheaper knock off types I loved watching like Ghoulies and the Munchies. Critters was pretty scary and weird.”

“I loved the shows they had on television like the one of Elvira, Tales from the Crypt and these other really horrific ones they had on cable. I remember seeing them at my cousin’s house. Two of the episodes were of a man who killed a cop with these shotguns under his hands that when he raised them he blew the cop away and another one with a woman who was so obsessed with her beauty and was scared to grow old. She ended up getting so paranoid she threw a knife at a film screen of her face as an old lady and it ricocheted back at her. In the end the film screen had her young face smiling while her dead body was now old with the knife in her head. I still don’t know what series that was, but it was the kind of real horror stories I enjoy.” 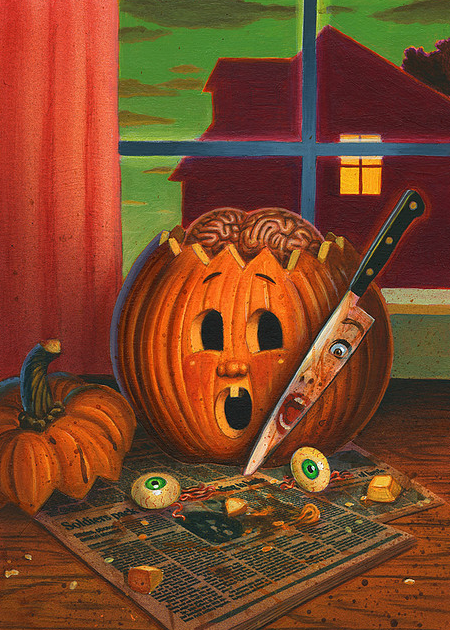 HL: Finally, what does the immediate future hold for you as an artist?

“I’ve been neglecting the darker side of my art. I began to do portraits of classic monsters double exposed together with acrylic paints a few years ago and I think I want to continue some of that, but also my comic book horror stuff. I want to get back to doing that again. So it will be a mixture of all that stuff I imagine. With all the cartoon work I’ve done I need to get my hands dirty again.”

“I only skimmed the surface of horror stuff in comics. I didn’t take it all the way. I worked on several short horror things, but I want to work on a larger body of work next. I hope I can start this year, but I have a huge 4 foot painting I am painting for a Garbage Pail Kids fan. There are some horror elements, but it’s mostly Sci-Fi with some Star Wars monsters in it. Based off my Jabba The Hutt “Loogie Leia” painting. It’s like that, but on steroids. It will have a lot of those Alien horror monsters all around watching television and the Rancor creature grabbing a Gammorean Guard. It should be fun … then after it’s done I get to open my box of dark stuff. I hope.” 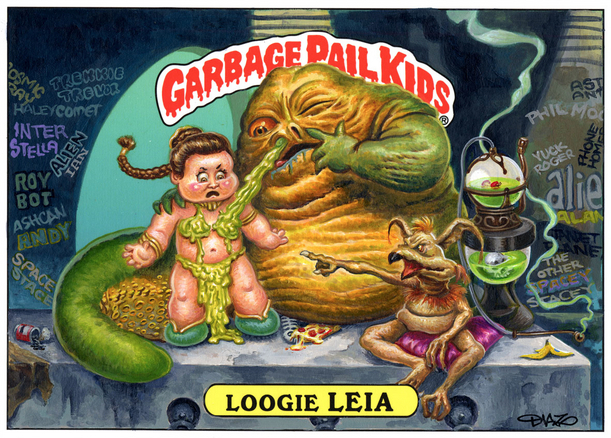 On behalf of everyone here at Halloween Love I want to say a MASSIVE thank you to Luis for taking the time to talk with me. It actually turned into one of the most enjoyable little interviews I have ever put together and I always appreciate it when busy professionals take the time to communicate with us fans. To see a huge selection from his portfolio of amazing work just head on over to his Flickr page. You will be glad you did! 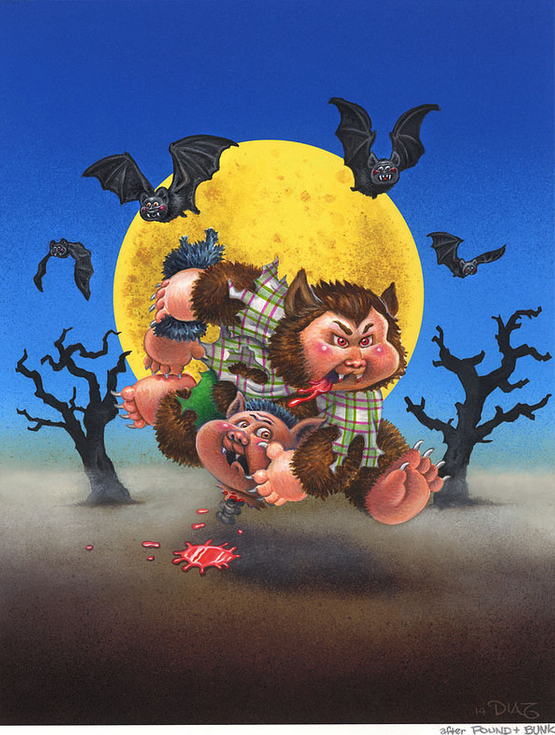