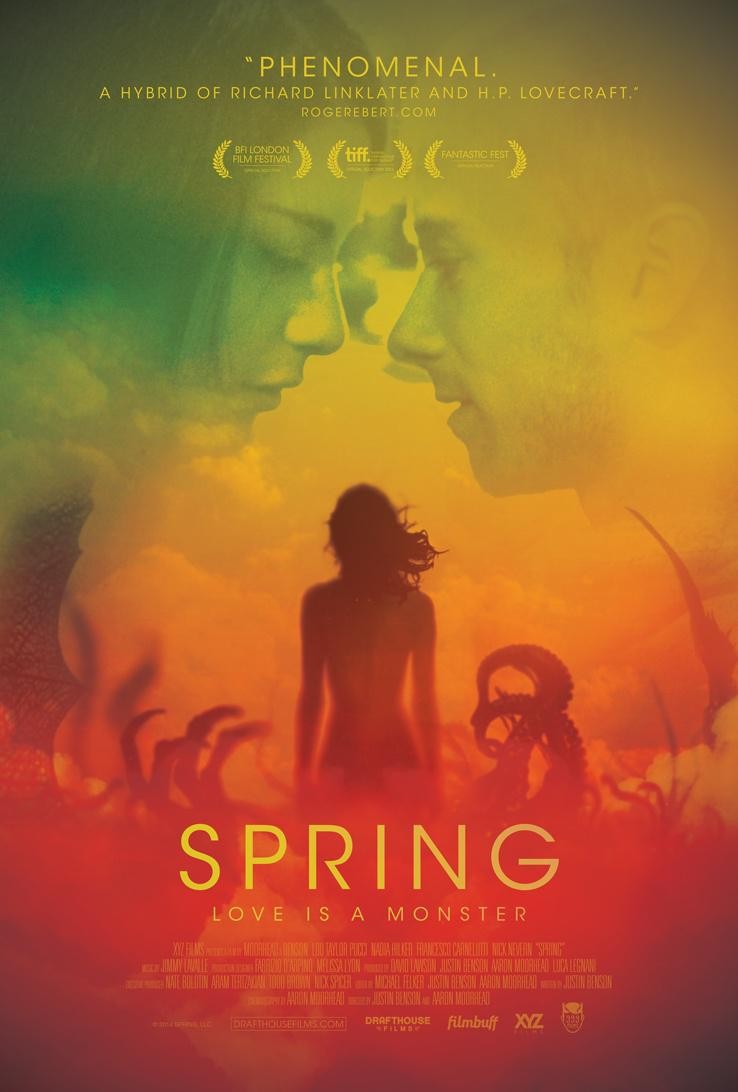 Every once in a while, a horror movie comes along that makes you excited about horror movies again. These movies are the rarest of them all, and finding them can be like locating the proverbial needle in a haystack. But once found, they make you realize that all the fruitless searching was well worth it.

In the year 2015, Spring is that elusive needle.

Written by Justin Benson and directed by both Benson and Aaron Moorhead, Spring is the story of Evan, who finds himself lost in the wake of his mother passing away. On a journey of self discovery, Evan heads to Italy, where he meets a beautiful woman by the name of Louise. They immediately have a connection, though Evan soon realizes that there’s more to his lady friend than meets the eye.

With all due respect to the genre, there’s a certain stigma attached to the term ‘horror movie,’ and even diehard fans like ourselves aren’t immune to that. With so many bad horror movies flooding the marketplace each and every week, it’s almost impossible to not get tired of the genre every once in a while, as everything ‘new’ tends to feel like little more than a copy of a copy of a copy.

With Spring, Benson and Moorhead have delivered a truly original piece of horror cinema, though I feel the need to point out that it’s not quite a horror movie in the traditional sense. Yes, it is indeed about a beautiful woman harboring a monstrous secret, making it somewhat of a creature feature on at least a base level, but Spring is really more of a love story – with a little horror thrown into the mix.

It’s that fusion of a supernatural monster flick and a genuinely romantic love story that makes Spring such a unique experience, and it’s the sort of movie that is continually evolving in such a way that you’re never quite sure what is going to happen next. Even when you think you know what Benson and Moorhead are going for, they always throw a wrench in the mix, and god damn is it refreshing.

I’m constantly pointing out in my reviews that the most important quality of any movie is that the characters are likeable, and both Evan and Louise almost instantly fit that bill. Exceptionally brought to life by Lou Taylor Pucci and Nadia Hilker, they’re two of the most memorable characters in recent genre history, and they’re as interesting and likable on their own as they are when they’re sharing the screen.

The secret of Spring is in regards to who/what Louise is, and it’s that reveal that is a particular breath of fresh air in this unique monster movie. Rather than just choosing one monster and playing with those tropes, Benson and Moorhead impressively blend many together, creating an entire mythology around an entirely new creature. As muddled as it threatens to become, the two pull it off with admirable precision.

The best movies are the ones that actually have something to say, and Spring is loaded not just with a beautiful style but also no shortage of substance. The oftentimes brilliant dialogue makes some interesting and thought-provoking observations about life and what it means to be in love, and by the end it’s perhaps the most genuinely affecting monster movie one could possibly ask for.

Taking two entirely different genres and blending them together is certainly no easy task, and while watching Spring I couldn’t help but be in awe of how well Benson and Moorhead balanced heart and horror. They have fun with the concept, showing a sense of awareness about the inherent silliness of it all, but Spring is mostly played with a straight face, and it frankly works better than it probably should.

As beautiful and mesmerizing as its female lead, Spring is the rare horror movie that elevates the genre to a higher level, and it’s a genuine piece of art that will resonate long past the point where 90% of new release horror movies are completely forgotten. In only their second feature together, Benson and Moorhead have proven that they’re two of the most unique filmmaking voices of our time.

Watching Spring, simply put, is like falling in love with genre movies all over again. So do yourself a favor and take the plunge.