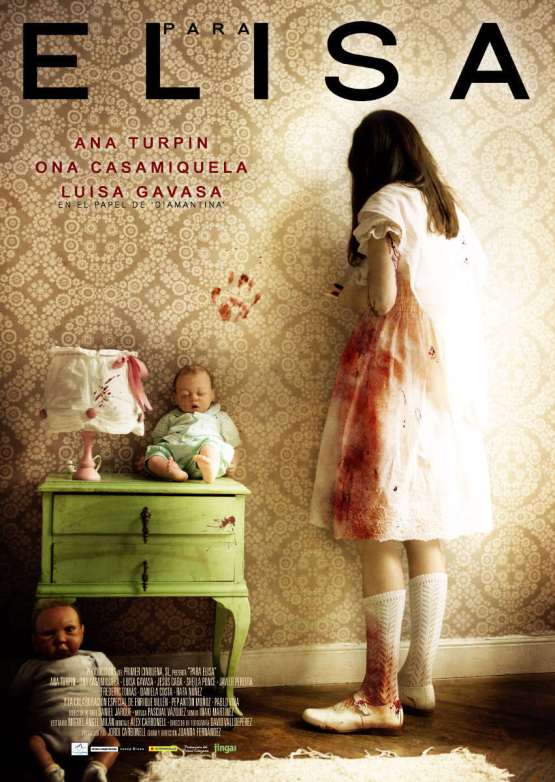 For the last few years, a Spanish horror film called Para Elisa has been finding its way back into the spotlight without any means for the mass audiences to see it. Now, thanks to Dark Sky Films, Para Elisa will be hitting DVD and video on demand services on September 1st.

The film follows a party girl Ana (Ona Casamiquela) after she answers a babysitting ad looking for some quick post-graduation cash. After arriving for an interview at the elegant home of Diamantina (Luisa Gavasa), she finds herself involved with a former child prodigy pianist who has grown into an eccentric old woman who collects antique toys and dolls. Ana is disturbed by Diamantina’s odd behavior and horrified to discover that her child, Elisa (Ana Turpin), is not a child but rather a deranged woman her own age. Before Ana really understands what’s happening, she finds herself trapped in the house and made to serve as Elisa’s new toy – a toy that like many others before it may well be broken.

Immediately, this premise is reminiscent of a Tales From The Crypt episode titled, “The Arrival.” However, the idea of turning a human into a living plaything isn’t anything new, but the execution of Para Elisa shows elements of promise. For the first half of the film, Para Elisa feels thrilling and fresh, but quickly finds itself trapped in overused cliches and predictable storytelling.

Visually, the film is a stunning work of production design and cinematography playing together in perfect harmony. Unfortunately, the story itself takes some strange routes in getting to the creepiest moments. For one, the major driving force of the film is Ana’s boyfriend, a shit-heel drug dealer that is woefully unlikable. Once Ana is trapped inside of Diamantina’s home, he becomes our major focus (in his quest to find her). He’s a scumbag that never fully crosses the threshold into an “anti-hero” and we’re instead left with an unlikable driving force.

While the story may follow some pretty standard conventions, the moments of terror are genuinely satisfying. Physical and psychological torture are executed wonderfully, it’s just the story to connect all of these terrifying moments that suffer. Ona Casamiquela’s performance as Ana at times feels a bit over the top, but this break from the eerily calm surroundings of the house is actually quite welcomed.

Ultimately, this film is an extremely mixed bag but shows a great deal of promise from the filmmakers. If you’re into weird babysitter horror films, this one is definitely for you.