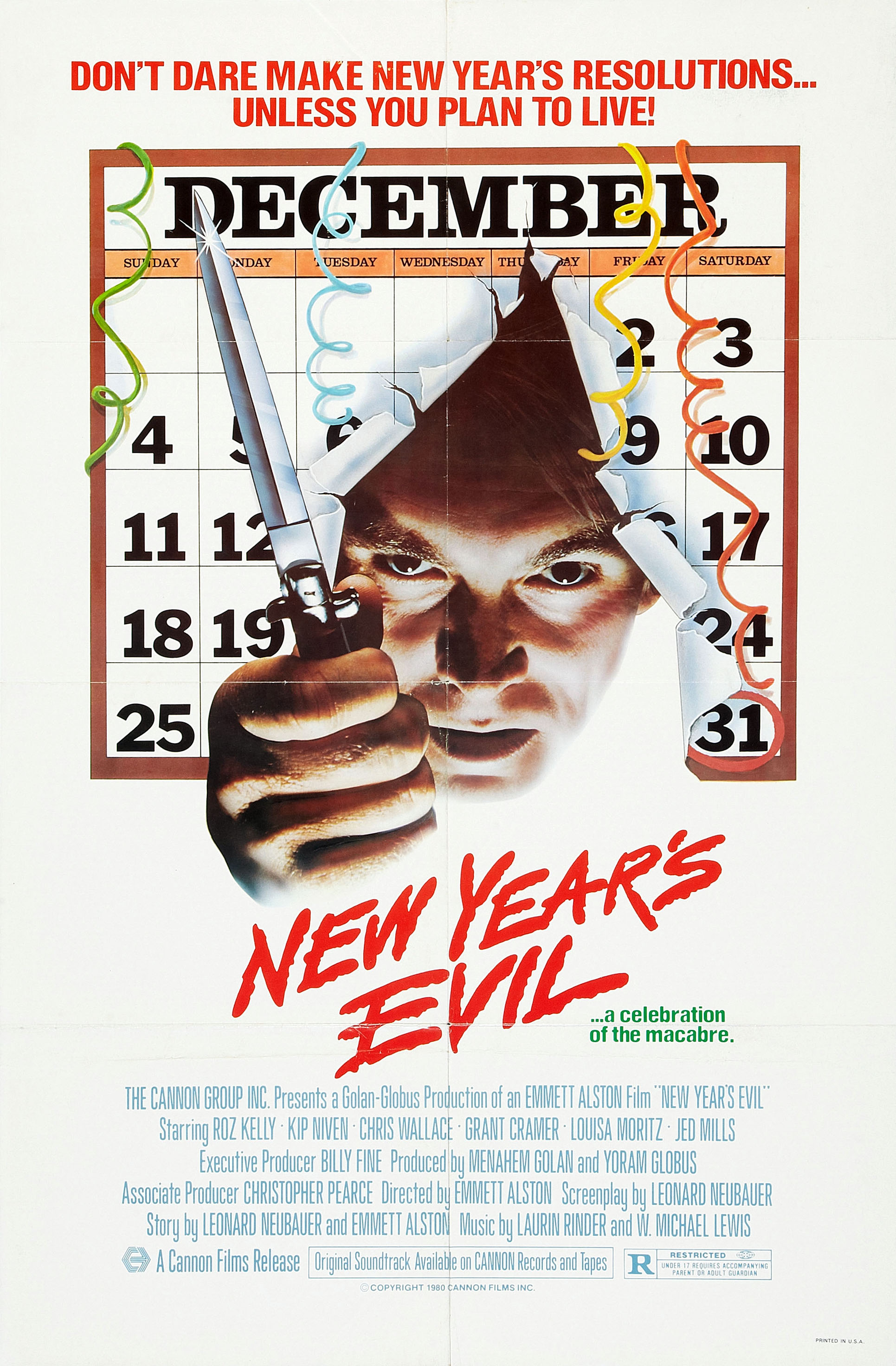 After the success of Halloween, the slasher sub-genre capitalized big time with other holiday-themed body count flicks, films like My Bloody Valentine, April Fool’s Day and Mother’s Day coming along to ensure that every big date on the calendar had a horror movie of its very own.

Released in 1980, New Year’s Evil is unique for being one of the only horror movies set on New Year’s Eve*, which has made it somewhat of a cult favorite over the years. Written and directed by Emmett Alston, the film centers on a madman who calls into a New Year’s party and promises the host that he’s going to kill someone each time the clock strikes midnight, in each of the four time zones.

Clever concept aside, there’s a lot about this early slasher effort that makes it stand apart from the pack, including a punk rock attitude that is at times reminiscent of Return of the Living Dead. It’s as if the whole movie was built around the idea of showcasing some up-and-coming New Wave acts, as many sequences play out like full-blown music videos. There’s a certain charm about it all, as it’s dated to the point of being endearing.

And then there’s the killer, whose identity isn’t for a second shrouded in secrecy. Slasher films are known for employing that ‘whodunit?’ formula, but New Year’s Evil throws that out the window, instead showing us the killer’s face right from the get-go. The film shifts between the New Year’s party and the unmasked killer’s pursuit of new victims, and though there is a surprise reveal in the final act, it’s quite interesting that the villain is a main character here, rather than a mysterious force.

But the most interesting thing about the film are the weird messages that seem to be running underneath it. The main character, known as Blaze, is a sort of Elvira for New Wavers, and Alston’s script uses the character’s status to make some interesting statements about the nature of fame. We find out toward the end of the film that the killer is actually Blaze’s husband, and he delivers an utterly bizarre monologue that suggests his jealousy, and hatred for women, are the motives for all the murder.

In The Slasher Movie Book, author J.A. Kerswell writes that New Year’s Evil has “a depressing streak of misogyny running through it,” and though the same could be said about many slasher films, it’s not out of line to assume that Alston may have had some issues with the opposite gender, at the time of writing it. All of the victims are blonde-haired and they’re all portrayed as being total bimbos, and at one point one of the bands even sings a song titled ‘Dumb Blondes’ – which is immediately followed up by a scene of a blonde being, well, a dumb blonde.

Misogyny aside, the most compelling thing going on in is New Year’s Evil is Blaze’s son, played by a pre-Killer Klowns from Outer Space Grant Cramer. From the moment we meet him, it’s clear that his mother’s fame has left him in the dust, as he isn’t able to get half the attention that her fans do. At one point, we see him ingest a few nondescript pills and then put his mother’s pantyhose over his head, with the implication being that he’s turned on by his own mom.

Again, it’s an interesting – if not utterly bizarre – statement about how warped the child of a star can become, though unfortunately the movie never really travels too far down that path. Cramer’s role in the film is very small, which is a shame because what’s going on with him is far more interesting than anything else going on here.

As a slasher film, New Year’s Evil totally misses the mark, as it bores when it should be entertaining. The blood is very minimal and the kills are as lackluster and uninspired as they could possibly be, with the killer only developing a flair for theatrics in the final moments. His attempted murder of his wife is admittedly inspired – he ties her to the bottom of an elevator car, and makes it go up and down – though all he really does is strangle and stab, throughout the rest of the film.

Ultimately, New Year’s Evil is only remarkable for being the one true ‘New Year’s horror movie.’ It’s just not a very good movie, nor is it an entertaining one, but it coasts by on a fun concept and a lack of competition. After all, what other horror movie are you going to cuddle up on the couch with, when the clock nears midnight on New Year’s Eve? Sometimes, being the only one of your kind is enough to make you special, and that is indeed what makes this one worthy of a watch.

Scream Factory is bringing New Year’s Evil to Blu-ray for the first time on February 24th, and you can head over to their Facebook page for full release details. If you want to watch it tonight, it’s available on Netflix as well as Amazon’s instant streaming service.

*Many thanks to Jason R. Wells for reminding me that 1980’s Terror Train was also set on New Year’s Eve. And there’s another film from 1987 called Bloody New Year, which I haven’t seen. Perhaps I’ll review it next December 31st, here on HL!