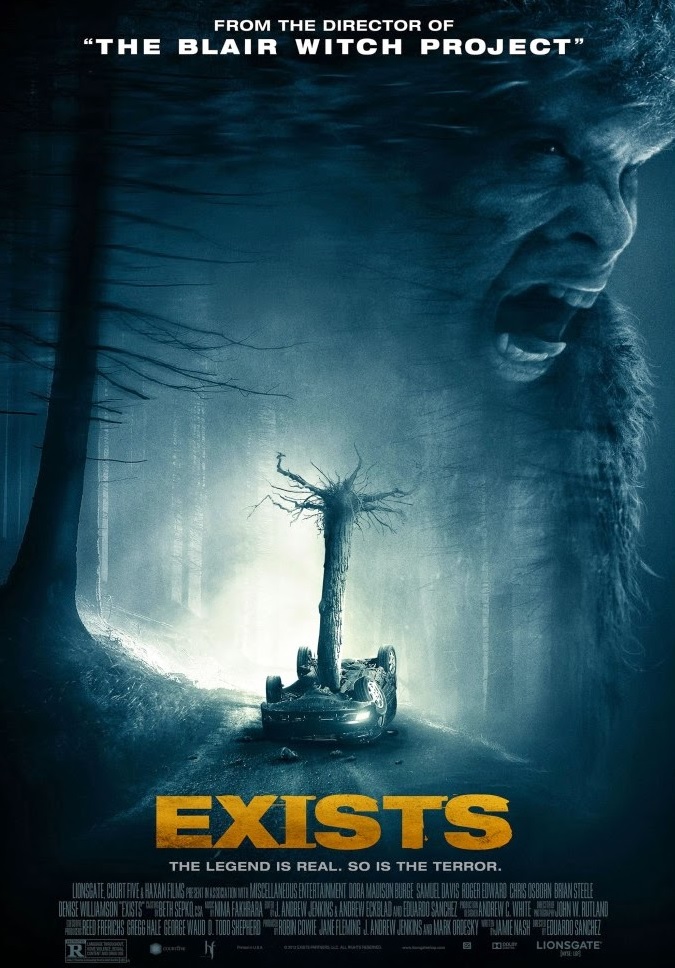 I consider myself somewhat of a Bigfoot enthusiast, endlessly fascinated by the potential existence of the beast and eager to devour any film that promises to bring him to life. Unfortunately, horror movies featuring Sasquatch have been pretty bad over the years – and that’s kind of an understatement.

It’s for this reason that I was very excited about 2014’s two main Bigfoot offerings, coming our way courtesy of two talented filmmakers. First, Bobcat Goldthwait set his sights on found footage horror for Willow Creek, and now Blair Witch Project co-writer/co-director Eduardo Sanchez makes his return to the sub-genre with Exists.

Released onto VOD outlets last month, Exists centers on a group of five friends who hit something on their way to a remote cabin in the woods, soon thereafter finding themselves pursued by none other than a vengeful Bigfoot. Stranded in the woods, without cell phone service or a car, they keep the cameras rolling, as the body count rises. Because of course they do.

It’s always important for found footage films to establish WHY the characters continue filming, and Exists unfortunately doesn’t bother to do so. In fact, it doesn’t bother to establish anything at all about the characters, who are so lacking in depth that it’s genuinely impossible to even remotely care about what happens to them. They’re little more than victims waiting to be attacked, and it’s painfully obvious that no attention was paid to their development.

As far as the story is concerned, that too is quite underdeveloped, as screenwriter Jamie Nash just throws the characters into their perilous situation without ever really establishing any sort of context. Of course, one could argue that nobody is watching a Bigfoot flick for a great story or good characters, but these nagging script issues nevertheless bind Exists‘s proverbial hands, and prevent it from being anything more than a forgettable experience.

Fortunately, there is some good to be said about the film, as the lack of character/story development at least allows for a break-neck pace that never bores. We get our first glimpse of the film’s Bigfoot within mere minutes, and it’s almost immediate that he starts ruthlessly terrorizing our two-dimensional heroes. Running only 80 minutes long, Exists is nothing if not a serviceable dose of mindless entertainment, which is in some ways all it needs to be.

The real highlight here is Bigfoot himself, brought to life by old school ‘guy in suit’ effects. At times genuinely chilling, when only quick glimpses are seen, the beast becomes a bonafide camera whore once the action really gets going, and it’s hard not to appreciate how much of him Sanchez decides to show – especially after watching a film like Willow Creek, where a bit too much was left unseen.

Whereas many Bigfoot films hide the big guy in the shadows, Exists admirably gives you exactly what you’d want in the monster department, which honestly negates many of the issues that it suffers from. The monster suit, designed by WETA, is quite impressive, and by the end of the film you’ve seen pretty much every square inch of it. So props to WETA, for elevating a generic script to somewhat of a higher level – I stress the word ‘somewhat.’

Alas, though the monster is awesome, the film unfortunately does the bare minimum when it comes to delivering on the promise of watching him tear apart cookie cutter characters. The problem is that Exists is played a bit too seriously to be as fun as it should be, and it’s also too silly to ever really be scary. Particularly in the latter portions, Sanchez seems intent on delivering a fun, thrill-ride sort of experience, but his second found footage feature fails to ever fully embrace either of the tones it plays around with. It’s a shame, because there are brief glimmers of both chills and thrills.

Due to the depressing lack of any real competition, I feel comfortable labeling Exists one of the better Bigfoot horror flicks, though ultimately it just sort of, well, exists. It’s a wholly generic experience, which is a bummer considering Sanchez is primarily known for being such a pioneer of the genre – and of this sub-genre, in particular. 15 years ago he totally changed the game, so it’s hard not to expect more from a guy like Sanchez.

Bottom line: Exists isn’t awful. It’s just incredibly forgettable. But hey. There are much worse things for a horror film to be, right?