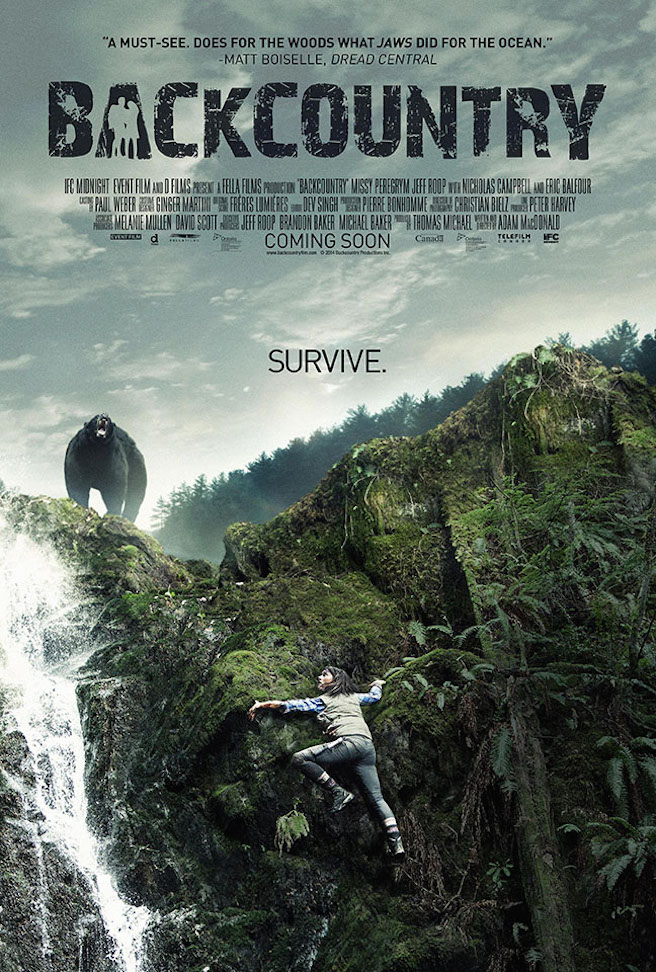 It’s the year 2015, and if the idea of a young couple heading out into the woods and encountering something evil doesn’t at least make you think about rolling your eyes, then you probably haven’t seen all that many horror movies. But a good movie is a good movie, no matter how many times it’s been done before, and Backcountry serves as the latest example of that.

The feature debut of writer/director Adam MacDonald, Backcountry centers on Jenn and Alex, who set out for a romantic camping trip into the woods. While it at first seems like the biggest threat to their safety is a fellow camper with questionable motives, they soon realize they’ve stumbled right into the home of a particularly nasty bear – and the beast is none too happy about their arrival.

When I look back on my favorite horror films, most of them share the common trait of putting a large focus on the characters. While a bad filmmaker rushes right to the ‘good stuff,’ a good one takes his sweet time and lets us actually get to know the characters who are about to come up against an evil force, and Adam MacDonald proves with Backcountry that he’s one of the good ones.

It’s a full hour before much of anything happens in the film, as MacDonald’s script spends that downtime setting a mood and investing us in his characters. Jenn and Alex, played by Missy Peregrym and Jeff Roop, are immediately likeable, their chemistry and natural dialogue allowing you to believe that they’re a real couple. And that matters, because you genuinely care about them when shit goes south.

What MacDonald also does really well in that first hour is hint at what’s to come, with subtle clues about the impending threat imbuing the proceedings with a sense of tension and palpable dread. There’s one great little moment where Alex spots a large footprint in the dirt but covers it up so Jenn doesn’t see, and your heart sinks when you realize that these two likeable characters are traveling headfirst into a horrific situation.

There’s admittedly nothing unpredictable about Backcountry, as again anyone who has ever seen a horror movie surely knows right off the bat how it’s going to play out. But that predictability matters very little, as the movie is so well-executed that you don’t need to be surprised in order to feel what it wants you to feel. It’s ultimately less about what is going to happen, and more about when it is going to happen – and when it does, oh boy is it horrifying.

It’s become fairly cliché to compare ‘nature run amok’ films to Jaws, but with Backcountry, the comparison is in many ways warranted. Like in Jaws, the monstrous animal is seen very little throughout the movie, making those limited appearances all the more effective. Most impressive of all, it appears that a real bear was used for the majority of those scenes, and I didn’t spot a single instance of CGI.

The problem with modern day movies about killer animals is that they’re often quite silly, with companies like Syfy all but sucking the horror right out of nature. Backcountry is an effective reminder that nature is terrifying enough on its own, without fictional monsters being introduced into the mix. The film exploits both its beauty and its horror, perhaps more effectively than any other in recent memory.

In a world where so many horror movies seemingly play out in fast-forward, with the filmmakers eager to get to what they think is the stuff we want to see, Backcountry‘s restraint is quite refreshing, and it’s also its strongest suit. It’s the sort of film that’s as much about the relationship of the characters as it is the monster that threatens to rip them apart, and that’s what makes this one such a treat.

Backcountry is survival horror at its simplest and finest, and indeed it’s likely to make you question trekking out in the woods, the same way Jaws made you think twice about stepping foot into the ocean. So you might want to hold off on watching this one, if a camping trip is in your near future.

Trust me on that.