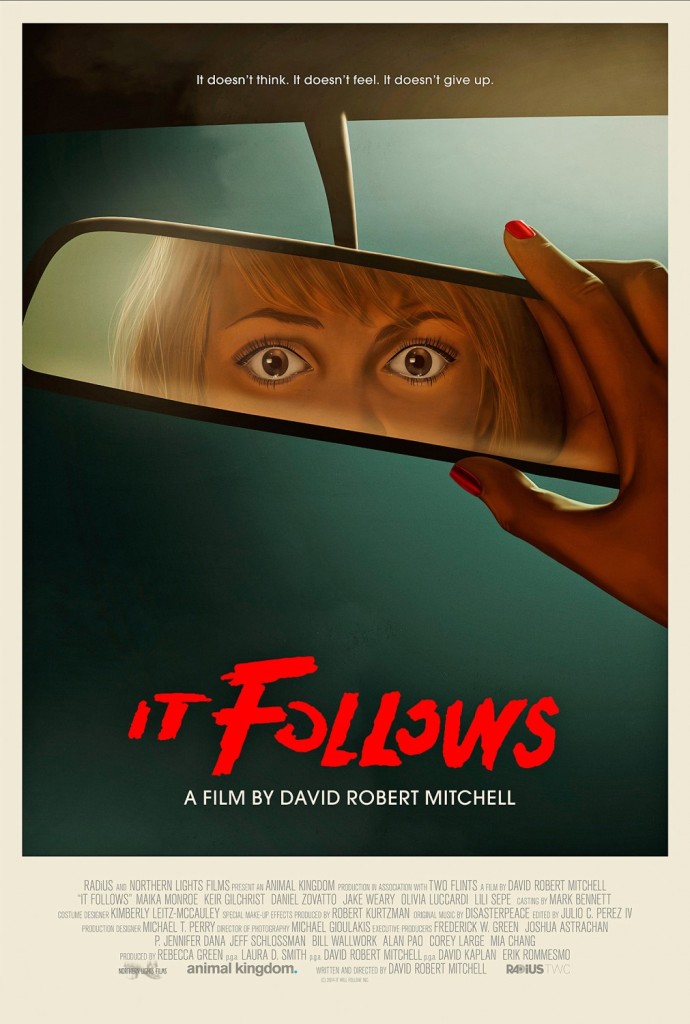 Something pretty incredible happened on March 13th. Fittingly a Friday, the second of three Friday the 13ths this year marked the limited theatrical release of new indie darling It Follows, a horror film that was released by Radius-TWC into just four theaters – and only in New York and Los Angeles.

It’s of course not uncommon for indie horror films to only hit a handful of theaters before rolling out on VOD outlets, but the story of It Follows is quite frankly a singular one. Despite the incredibly limited release, the film proved itself to be the little engine that could, pulling in $160,000 in its opening weekend – even more impressive when you realize the per-theater average was over $40,000.

Due to the totally unexpected box office success, the planned VOD release was immediately put on hold by the distribution company, who instead decided to expand the theatrical release of It Follows. And indeed the film opened in more theaters across the country this past Friday, spreading even wider to over 1,000 different theaters this coming Friday.

Many horror fans, perpetually unhappy as they tend to be, have bemoaned the fact that the VOD release has been put on hold, unable to accept that they can’t instantly stream this year’s hottest horror film from the comfort of their own home – at least not yet. You can chalk that up to how much VOD platforms have spoiled us all, though to complain is to entirely miss the point of what’s happening here.

Whether you’ve seen It Follows or not (and I haven’t yet), and whether you liked it or not, the success of the film is nothing if not a success for the entirety of the horror genre, and that’s something that every single one of us should be celebrating right now. Why, you ask? Because it represents quality indie horror, normally reserved for VOD outlets, breaking into the mainstream, and that’s a HUGE deal.

Last year’s genre output highlighted the fact that VOD outlets are right now the best provider for quality horror cinema, as nearly all of 2014’s standout gems were not widely released into theaters. As we discussed earlier this year here on HL, the horror fans who stayed home were treated to a handful of spectacular films, while those who went out to theaters were (mostly) fed piles of regurgitated crap.

It’s no secret that Hollywood horror is in a pretty bad place right now, as theaters have been full of uninspired slices of paranormal activity for what seems like forever now. I’m pretty sure I can count on one hand the number of quality horror films that were released into 1,000+ theaters within the last few years, as Hollywood has gotten quite comfortable peddling the same crap over and over again.

So how did It Follows, an indie film about a sentient sexually transmitted disease, find itself being unleashed upon the masses? It doesn’t take a rocket scientist to figure out that it is us, the horror fans, who are to thank for that. On Friday the 13th, thousands went out and supported the film, rescuing it from its immediate VOD future and turning it into one of the biggest horror success stories of our time.

The success of It Follows reflects, more than anything, how important it is that horror fans support horror movies. It sounds like common sense, but the truth is that many do anything but that. Fans often have boundless energy when it comes to bitching about things they hate, but when it comes to supporting things they love with their hard-earned dollars, that same passion often isn’t present.

Whether you like it or not, Hollywood is a BUSINESS, and the only way quality horror films will ever get made is if quality horror films are making MONEY. Why do we keep getting endless sequels, remakes and ripoffs of Paranormal Activity? Because though we may take to social media to bitch about them, we continue to go out and see them, and that’s quite frankly all that the business cares about.

Let’s say, for example, that It Follows debuted in those four theaters and only a few fans went out to see it. Guess what? We’d be in a far different position right now, because the film would’ve been almost immediately dumped to VOD outlets, and Radius-TWC would’ve likely gotten cold feet about ever banking on a small indie film again. That’s just the way this works, at the end of the day.

Thankfully, that is not what happened. Thousands headed out to those four theaters and plunked down their money to support original, indie horror, and in doing so they just might have changed the future landscape of the genre. Because that support sends a message to Hollywood, and that message is that fans will pay to see quality horror films that exist outside the formulaic Hollywood box.

For the first time since VOD became a thing, a horror film you’d expect to find on VOD outlets is now hitting big screens all across the country, reaching the masses in a way that can only be considered a huge step forward for the genre as a whole. Sure, not all that much may change if this is an isolated case, but could you imagine what would happen if all limited releases got the same support?

Contrary to popular fan belief, the mainstream success of genre fare is ALWAYS a good thing, as it opens up doorways for the genre to expand and better itself. You may hate that non-horror fans are so into The Walking Dead, for example, but if you genuinely want the genre to thrive, then the thought of a soccer mom paying $80 to meet Norman Reedus should do nothing but make you smile.

More than any other genre of film, the horror genre only thrives and survives if we, the diehard fans, continue to support it. Don’t ever underestimate the power that you wield in both your wallet and your typing fingers, and certainly don’t ever underestimate just how much good it does when you pay to see a new movie – either in a theater near you or on the VOD outlet of your choosing.

In the wake of It Follows‘ mainstream success, I’m a pretty damn proud horror fan right now. And you should be too.