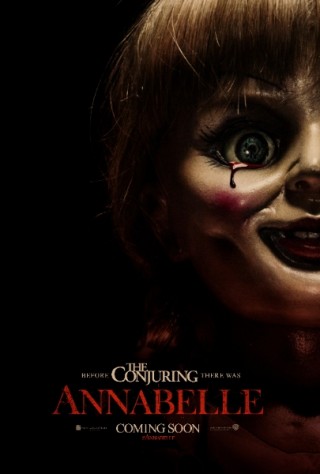 There’s a dialogue exchange in American Beauty that I’ve never forgotten, between Ricky and Angela. “You’re boring,” Ricky tells her. “And you’re totally ordinary. And you know it.”

At the moment, I can’t think of a more perfect way to describe how I feel about Annabelle, fresh off of enduring it at my local theater. It’s boring. It’s ordinary. And I’m pretty damn sure it knows it, deep down.

A money-driven spin-off that serves as a prequel to The Conjuring, the 70s-set Annabelle tells the origin story of the creepy doll from James Wan’s film, centering on husband and wife couple Mia and John.

Mia is a doll collector and John gifts her with Annabelle one day, a gift that almost immediately turns their lives into a horror movie.

After their next door neighbors are brutally murdered and they’re attacked by the same maniacal cult members, the young couple begins experiencing strange supernatural occurrences, and it soon becomes clear that a demonic entity is hungry for their unborn child’s soul. And that damn doll just won’t seem to leave them alone.

I’ve always said that there’s nothing worse than a boring movie. A really good movie is of course always engaging, and even really bad movies are oftentimes fun to watch. But between good and bad lies boring, and that’s unfortunately the category that Annabelle most neatly fits into.

Annabelle is the sort of movie that feels a whole lot longer than it actually is, dragging its feet so slowly through familiar territory that it’s hard to classify it as anything other than a chore to watch. Running only 98 minutes long, this first Conjuring spin-off is completely devoid of originality, staying so far inside the established lines of the genre that I can’t imagine any seasoned horror fan finding a single sliver of joy in those 98 minutes.

Coming off like carbon copies of the one-dimensional characters from Devil’s Due – another generic hunk of junk about a pregnant young couple in peril – Mia and John are uninteresting to the point that I wouldn’t even remember their names right now had the writer not thought it was clever to name them after the lead actors in Rosemary’s Baby – a film that Annabelle really, really, really wants to remind you of.

Cute, Gary Dauberman. Real cute. As cute as a Doberman, in fact.

Just as Mia and John don’t feel like real people so much as they do wooden characters plucked from the horror movie mold, so too does pretty much everything else about the film. From strange satanic symbols to a helpful priest, electronic devices mysteriously turning on to characters being forcibly pushed off screen by unseen entities, Annabelle is stitched together from the cloths of similar movies past, blending in with all the other demon-themed horror flicks we’ve been inundated with in recent years.

As for the Annabelle doll, she’s hardly even the star of the show here, taking a back seat much the same way Godzilla did in this year’s disappointing reboot. The doll’s screen time is fairly limited for a film named after her, and for the most part she’s just a prop for the demon that’s truly the film’s lead villain – who, I can only assume, was based on rejected Insidious concept art.

As goofy as it’d probably be if she did, you’ll likely be begging for her to actually get up and move around, rather than sit there like a creepy little bump on a painfully ordinary log. I wouldn’t be surprised if the script was originally a standalone film that the doll was quickly infused into to profit off The Conjuring‘s box office success, because that’s damn sure the way it feels.

If there’s anything positive I can say about the film is that the cinematography is at times much more compelling than the movie itself is, and the score is also head and shoulders above any of the imagery that it desperately tries to make interesting. Granted, I’m not sure I’d be able to tell the difference between Joseph Bishara’s Annabelle and Insidious scores in a blind hearing test, but it’s still worth noting.

Aside from those two elements, the ‘kid turns into an adult’ scare is pretty effective, even if the trailers totally ruined it and yes, even if it was lifted from Mario Bava’s Italian horror film Shock. There’s also an elevator scene that’s the most effective couple minutes in the entire movie, thought it stands out in such a way that it almost feels like it belongs in a much more entertaining movie, rather than this one.

In so many words, Annabelle is Child’s Play if Child’s Play wasn’t entertaining and Rosemary’s Baby if Rosemary’s Baby wasn’t good. It’s just all around too dull and boring to do anything but pass through you like a tasteless meal that you just want to finish. And much the same way you’d never wish to return to the restaurant where you ate that meal, Annabelle is likely to make you leave your theater with a lack of interest in all future big screen horror, until this tired paranormal trend finally meets the true death.

Ultimately, Annabelle served as a reminder of why I appreciated Kevin Smith’s Tusk so much. Original horror on the big screen is rarer than finding a bald eagle perched on a tree in your backyard, and sometimes you need to be reminded how unoriginal most filmmakers are to realize how much you should appreciate those rare doses of originality – whether the movies are masterpieces or not.

But hey. At least there’s a fun Child’s Play reference and a nauseatingly repeated shot that seems to have been designed to evoke the spirit of that film’s original poster – director John Leonetti was the cinematographer for Child’s Play 3, it’s interesting to note.

So yea. There’s that.