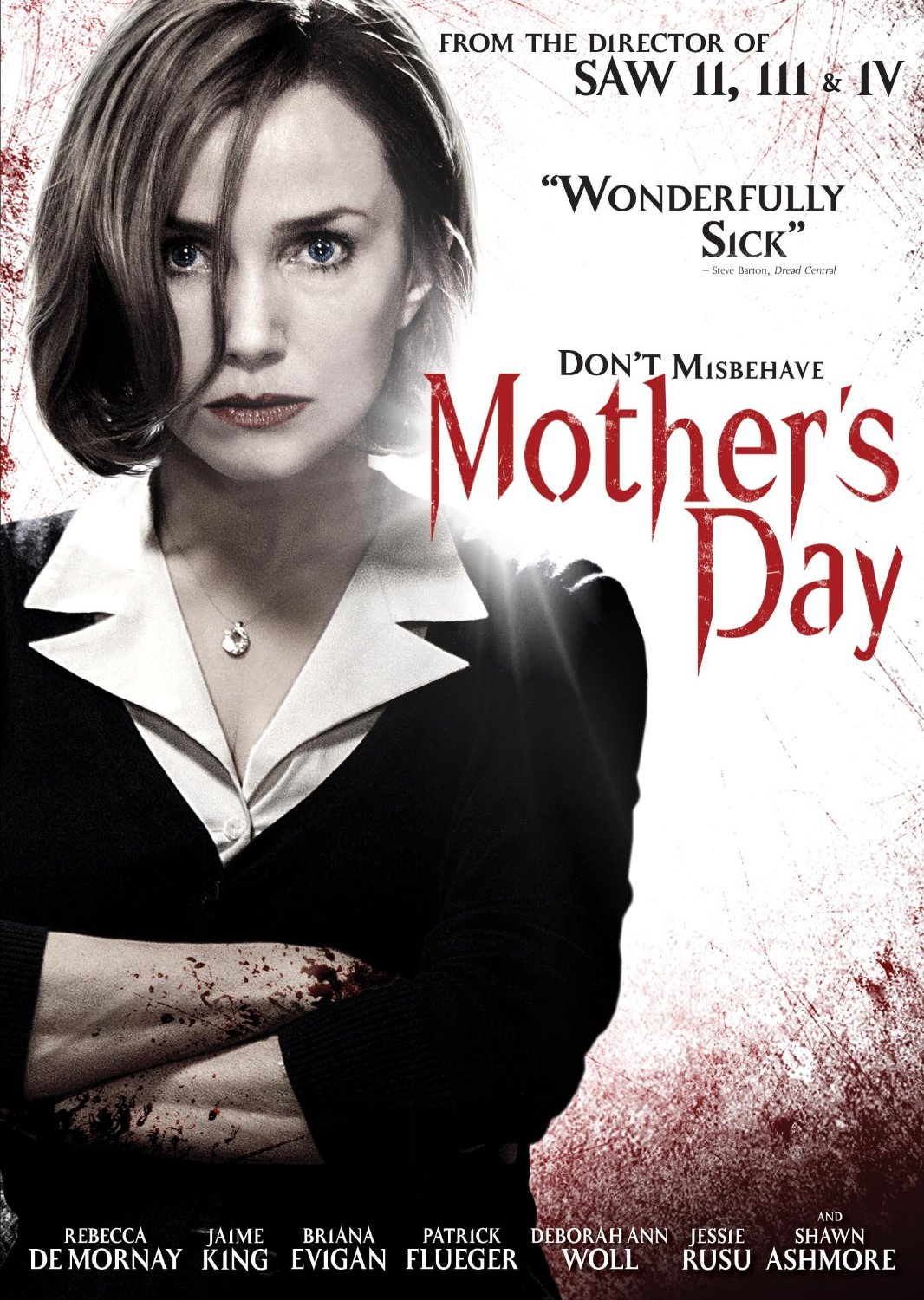 Exactly two years ago, on this very date, Darren Lynn Bousman’s remake of the 1980 Troma film Mother’s Day was released on home video. And over the course of those past two years, I’ve heard very little discussion about the film, within the horror community.

It’s never celebrated as being one of the best remakes nor is it ever trashed as one of the worst; instead, it seems to have been just plain ignored, which is quite frankly the worst fate a movie could ever suffer.

I don’t know if it’s because the original is relatively obscure, and doesn’t have as much of a fan following as most films that get the remake treatment, but I do know that Mother’s Day is one remake that deserves much, much better.

Since this Sunday is Mother’s Day and all, now seems like the absolute perfect time to talk about one of the most under-appreciated horror remakes of the last several years; Mother’s Day, of course!

Written by Scott Milam, and directed by Bousman – who was behind the camera for Saw 2, 3 and 4 – Mother’s Day is a very loose remake of the Troma film that it shares a name with, taking the general idea of that movie and going in a much darker direction with it.

A high stakes home invasion film, Mother’s Day centers on three brothers who return to their childhood home after a botched bank robbery, which leaves one of them with a massive shotgun wound. What the brothers don’t realize is that the home was foreclosed on a few months prior, and scooped up by a young couple – who just so happen to be having a big party at the house, with all their friends. It’s not long before the boys’ sadistic mother arrives, with their sister in tow, and both groups are forced to engage in a battle to the death.

The general feeling about remakes is that they’re unnecessary, considering the fact that most movies being remade are already plenty good enough, and don’t need to be improved upon. In the case of Mother’s Day, I don’t think even the biggest fans of the film or the lovably whacky company behind it can argue the fact that it’s not exactly a masterpiece.

Don’t get me wrong; I enjoyed the original for what it was, and in fact it’s one of my favorite Troma movies, but if any horror movie that’s been remade in the last several years was ripe for a remake, it’s probably Mother’s Day. And it’s because of that fact that Mother’s Day 2012 excels, and stands out amongst most other remakes. By taking a goofy Troma film and remaking it as a stone cold serious horror flick, Bousman and company created a rare remake that’s actually better than the original, and is perhaps the biggest improvement over an original film out of any horror remake we’ve yet seen.

Call me sick, but my favorite horror movies are typically the ones that are totally depraved, realistically brutal and incredibly violent; three descriptions that fit Bousman’s Mother’s Day remake like a glove. The film wastes absolutely zero time in getting to the action and the nearly two hour run-time is chock full of some of the most visceral, disturbing and downright twisted scenes and sequences in the genre’s recent past. From crushed fingers to exploding heads, multiple stab wounds to multiple gunshot wounds, Mother’s Day is about as ‘not for the faint of heart’ as movies get, and the effects are practical and incredibly realistic throughout.

My favorites in the genre also typically have fully fleshed out characters and solid stories that make all that brutality and violence mean something, and those are two boxes that Mother’s Day also manages to check off. Though the action begins so soon into the movie that we don’t immediately get to know any of the characters, which is a bit jarring at first, it doesn’t take long before we do become acquainted with each of them, once they’re placed into the most horrifying situation of their lives.

One of the more interesting aspects of the film is the way the situation reveals truths and secrets about each of those characters, and so the fact that the whole ‘getting to know you’ portion of the movie takes place during the horror rather than before it is actually a strong suit, rather than a detriment. I’m not going to claim that I cared about each and every one of the characters, but I totally understood who they each were as human beings, which is about all you can ask for. There’s a lot going on in the movie, in terms of the characters and their various secrets and motivations, and it all works, for the most part.

The most memorable of the characters is without a doubt ‘Mother,’ played by veteran actress Rebecca De Mornay. Her standout performance as a strong and powerful woman who will do anything for her children is effectively chilling, and she totally dominates every scene she’s in. De Mornay brings a level of humanity to the twisted character that’s reminiscent of Betsy Palmer’s performance in Friday the 13th, in the sense that you totally understand where she’s coming from. She’s got her own moral code, and she loves her family deeply, but if you overstep your bounds in either of those areas, so help you God. Mother is without question one of the more memorable female villains in recent years, and De Mornay’s performance is in and of itself worth the price of admission.

From a silly Troma film to an intense examination of human nature and a dark depiction of a mother’s undying love for her children, Mother’s Day is one horror film that undoubtedly underwent a huge transformation over the years, and if you’re asking me, Darren Bousman and all involved should be applauded for taking the term ‘remake’ quite literally, and turning one film into a completely different film. This is the kind of remake that makes all remakes look good. And, most importantly, the kind of remake that reminds us that ‘remake’ is not always a synonym for ‘pointless.’

Again, it may not be the best remake of the bunch, but it’s a huge improvement over the original, and an incredibly effective home invasion flick that stands tall on its own two feet. Why does nobody ever seem to talk about it? I have no idea. But they should. Because it’s one remake that’s totally worth your time.

If you’ve seen the Mother’s Day remake, I’d love to hear what you thought of it, so drop a comment below and let’s continue this discussion!