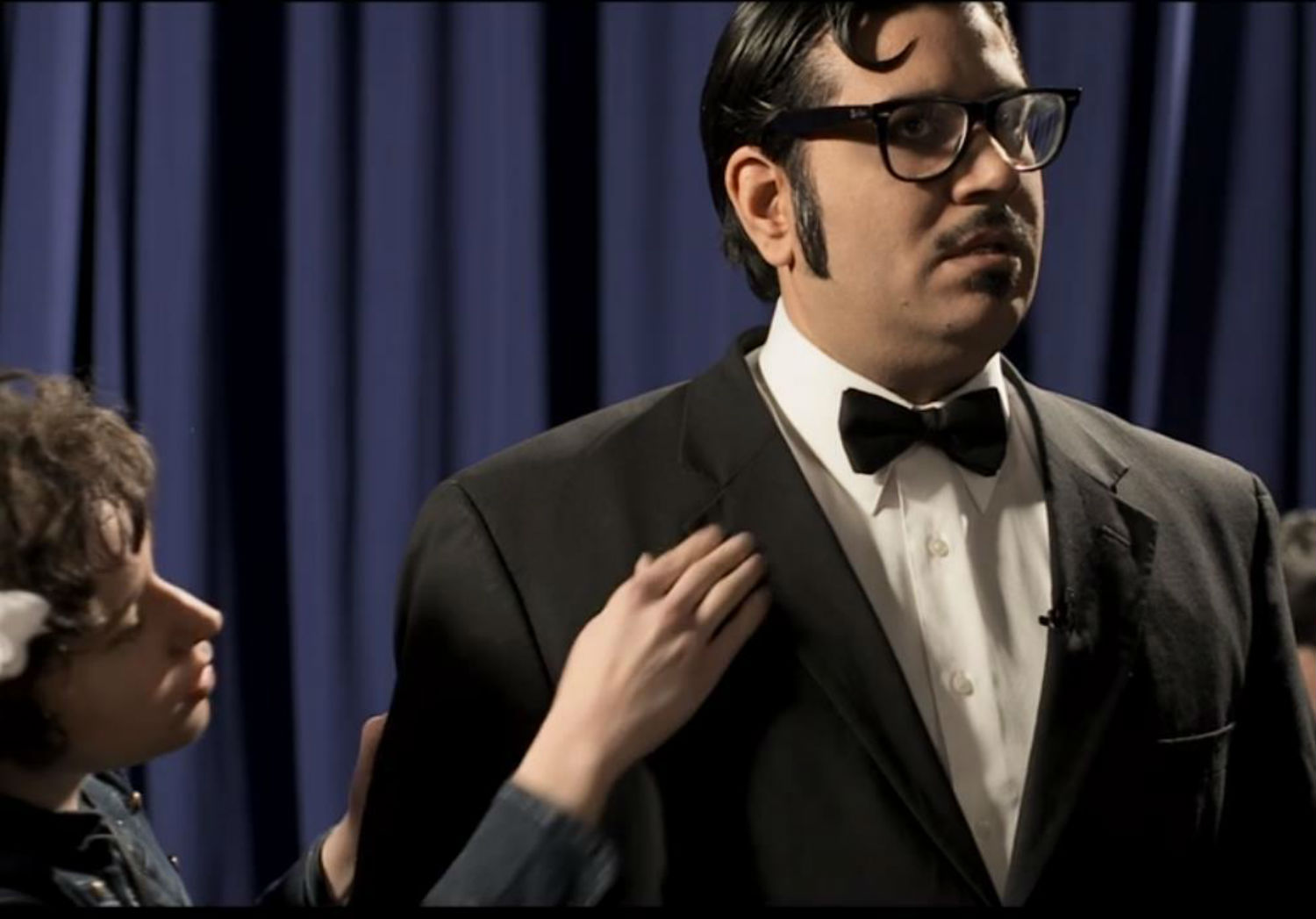 Edward D. Wood, Jr., the hard-drinking, cross-dressing auteur behind the notorious low-budget films Plan 9 from Outer Space (1959), Bride of the Monster (1955), and Glen or Glenda (1953), died at the age of 54 in December 1978, after which his productivity declined significantly. It was his first significant work stoppage since the late 1940s.

Throughout the 1970s, even while hampered by alcoholism and abject poverty, Ed Wood had never stopped producing new material. Though he didn’t direct any known feature films after 1972’s The Young Marrieds, he remained active in the movie business in various ways during his final years. He wrote several features for softcore king Stephen C. Apostolof, for instance, and made dozens or perhaps even hundreds of short pornographic loops. This was in addition to his hyper-prolific writing career, during which he churned out novels, short stories, magazine articles, and sex manuals with almost superhuman regularity. Through it all, Ed remained fixated on the same themes and motifs that had dominated his work since the 1950s: sex, death, booze, and women’s clothing, particularly angora sweaters.

But it all came to an end that sad December day. A mere two years later, when the book The Golden Turkey Awards made Ed famous by naming him the worst director of all time and Plan 9 from Outer Space the worst-ever film, Eddie himself wasn’t around to enjoy his newfound popularity. He’d been cremated and scattered in the Pacific Ocean by then, so he couldn’t answer any more questions about his penchant for wearing women’s clothing or the films he made with aging screen legend Bela Lugosi of Dracula (1931) fame.

In Eddie’s untimely absence, other directors began making films that drew on the life, work, and legacy of Ed Wood, usually with a combination of affection and gentle mockery. At the high end, especially in terms of production value and prominence, was Tim Burton’s Ed Wood (1994), a glossy, Disney-financed biopic with an all-star cast including Johnny Depp, Martin Landau, and Bill Murray. In a similar vein, though minus the money and big stars, was Ed and Bela (1986), a somewhat crude, but heartfelt short film that explores the Wood/Lugosi friendship. Relatively unknown, this movie almost resembles a rough draft for the Burton biopic.

Then there were the quirky Wood documentaries. Ted Newsom’s Ed Wood: Look Back in Angora (1994) is a jokey, lighthearted film that nevertheless manages to give a decent overview of Ed Wood’s entire career, including his transition from horror and sci-fi into pornography. Mark Patrick Carducci’s exhaustive Flying Saucers Over Hollywood: The ‘Plan 9’ Companion (1992) zeroes in on Plan 9 from Outer Space and discuses that film’s production, reception, and legacy in detail. Brett Thompon’s dreamy, highly stylized The Haunted World of Edward D. Wood, Jr. (1995) is built around testimony from those who knew and worked with Eddie during his 1950s heyday.

Since Ed Wood himself was not around to make any new movies after 1978, a few directors attempted to adapt Wood’s unfilmed screenplays and novels themselves. The most prominent such adaptation was Aris Iliopoulos’ I Woke Up Early the Day I Died (1998), based on a script Eddie had been working on since the 1950s and kept revising all his life. Iliopoulos assembled a cast of Hollywood ringers, including Billy Zane, Christina Ricci, and Tippi Hedren, and turned Wood’s dialogue-free script into a stylish 90-minute rock music video. Meanwhile, experimental filmmaker Andre Perkowski emphasized the campier elements of the Wood canon with his half-sincere, half-parodic films Devil Girls (1999) and The Vampire’s Tomb (2013), both of which feature exaggerated, hammy acting and deliberately slipshod production.

And the Ed Wood tribute films have continued into the new millennium. Recently, through my participation in a Wood fan forum on Facebook, I’ve learned that two of the more recent ones are now streaming on Amazon Prime. One is Plan 9 (2015), writer-director John Johnson’s reimagining of Ed Wood’s most famous film. Another is Unspeakable Horrors: The Plan 9 Conspiracy (2016), Jose Prendes’ mockumentary about the supposed hidden meaning of Wood’s anti-classic. To be honest, I approached both of these movies with trepidation. While I’m a fan of the Burton film and the straight documentaries, some of the other Wood tribute films have left me cold. In attempting to recreate the strange Wood alchemy, they just came across as stilted or even snide. (The Vampire’s Tomb, in particular, is a tough sit.) But my curiosity got the best of me.

Let’s start with Unspeakable Horrors. I’m guessing this was made in response to Rodney Ascher’s divisive doc Room 237 (2012), in which Stanley Kubrick’s The Shining (1980) is overanalyzed to the point of madness by fans and critics who fixate on tiny, seemingly insignificant details and spin wild conspiracy theories about the plot and Kubrick’s intentions. Here, the same basic approach is taken to Plan 9 from Outer Space, though this time it’s clearly all in jest, complete with a lot of middle-school bathroom humor.

To give this film an air of authenticity, Prendes recruited a handful of Hollywood insiders, including directors Joe Dante and Fred Olen Ray plus Ed Wood screenwriters Scott Alexander and Larry Karaszewski. They all give mock-serious testimonials about the film and its supposed artistry and symbolism. In addition, there are some sketch-comedy characters who offer their dubious views on Plan 9 from Outer Space. We have a scolding feminist (Maria Olsen) obsessed with phallic imagery, a sweaty redneck stereotype (Joshua Lou Friedman) chewing a toothpick, a weepy Plan 9 superfan (Arielle Brachfield) with mascara dribbling down her face, etc. The whole shebang is narrated by a semi-convincing Morgan Freeman impersonator (Stuart J. Smith).

All of these people talk (and talk and talk!) about the supposed political, social, and sexual subtext of Plan 9 from Outer Space, very little of which is evident in the clips we see from the original film. This mockumentary’s central conceit is that the commentators are treating this deeply silly movie so seriously. If you still don’t get that the assembled “experts” are supposed to be crackpots and fools, Prendes has them natter on about Area 51, UFOs, numerology, the Illuminati, etc. One speaker (Joston Theney) dons a tin foil hat. Another (Buz Wallick) seems sure that Plan 9 is rife with references to Eskimos. The fact that no one mentions Bigfoot or the Kennedy assassination is a sign of restraint on Prendes’ part.

Is any of this particularly funny? Eh, I guess it depends on your mood and your level of sobriety. Personally, I think this would have played better at, say, five or ten minutes instead of 75. I’ll admit I chuckled a few times, as when cranky, sarcastic horror host Mister Lobo wryly explained what an “Albuquerque ball” is. But mostly, I just kept waiting for Unspeakable Horrors to end as it cycled through the same few jokes over and over. The most enjoyable moments arrive when the interviewees put aside the “comedy” and just speak sincerely about Ed and his film.

That brings us to the little-loved 2015 Plan 9 remake. Coincidentally, Mister Lobo manages to be a highlight of this one, too, as he begrudgingly fills in for Criswell and supplies sardonic meta-commentary throughout the proceedings. John Johnson’s apparent goal in making this film was to update Ed Wood’s original film with CGI special effects, plenty of splattery gore, and a slightly more coherent plot. But what is the point of doing all this, you might reasonably ask? Aren’t Ed Wood’s cheapness and naivete integral to his charm? Why take those things away? I’m never quite convinced that the 2015 Plan 9 justifies its existence.

The opening passages, at least, are kind of fun. It initially seems that Johnson, who also gives himself a plum role as Officer Kelton, has found a way to take Ed Wood and drag him (no pun intended) into the 21st century. We’re introduced to modern-day equivalents of some of the classic characters from the 1959 film: rugged pilot Jeff Trent (Brian Krause), his devoted wife Paula (Amy Hart), jockular copilot Danny (Chris J. Duncan), the bereaved old man (Hal Handerson), and his recently deceased wife (Camille Keaton). They all acquit themselves admirably. Johnson himself isn’t bad either.

Crucial new characters include a plucky female scientist (Sara Eshelman) and a laid-back oldies DJ (Jerry Moore II). The latter character allows Johnson to use a lot of 1950s and ’60s oldies on the soundtrack, many of which provide an ironic counterpart to the onscreen action. It’s very cleverly done in some spots. This Plan 9 isn’t as laden with guest stars as Unspeakable Horrors, but there are a few familiar faces here, including YouTube star James Rolfe as an ill-fated cop. Conrad Brooks is the only returning cast member from the first Plan 9. “This ain’t the first time they’ve been here,” he intones, suggesting this remake is actually a sly sequel.

Again, with a much shorter running time, this might have worked. The big problem with the 2015 Plan 9 is that, about half an hour in, it becomes a standard-issue low-budget zombie movie, of which there have already been too many. The remake barely resembles Wood’s film after that, and there’s more than an hour left to go! It’s appropriate that the remake drops the words “from outer space” from its title, because Johnson greatly de-emphasizes the extraterrestrial aspect of the story in favor of Dawn of the Dead-ish hordes of shambling zombies. The writer-director reintroduces the aliens in the final third, but the film never stops feeling like a Romero ripoff during its last hour.

Honestly, I feel like a heel nitpicking Unspeakable Horrors and the Plan 9 remake. When you make an Ed Wood tribute movie, you obviously don’t have dollar signs in your eyes. You don’t do it for awards or critical praise either. You do it for the love of Edward D. Wood, Jr. These movies are lengthy, elaborate love letters to a man who got very little love from critics or creditors in his lifetime. I wish I could openly, wholeheartedly recommend them to you, but I just can’t. Sorry.

If you want to honor Eddie’s spirit, stick to his original movies, plus Burton’s biopic and the straight documentaries. If you want to see a filmmaker do something new with Ed’s existing material, I’d steer you toward Jesse Berger’s surreal Glen or the Bride of the Night of the Plan 9 from Outer Space (2014), which weaves a fresh story out of vintage clips from Eddie’s films. Not only is it more entertaining than most of the Wood tribute films, it’s only 25 minutes long!