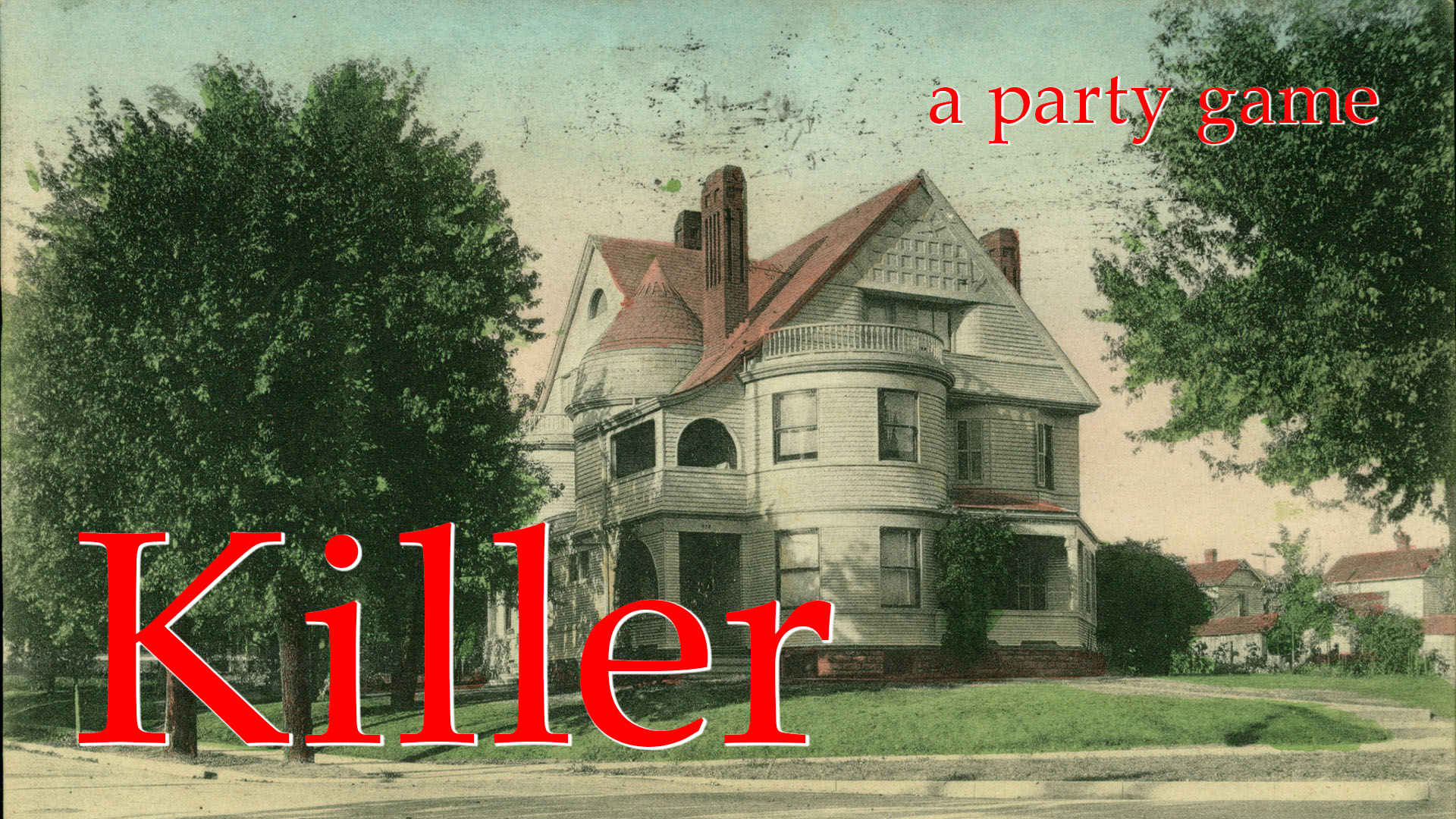 Make-believe has always been important to me. I loved dressing up as a kid, chasing my friends around, coming up with and playing games.

So, let’s make it official and define some rules. The game, we’ll simply call it Killer.

If you don’t have or can’t make any of the items required for play, here’s a list of cheap items from Amazon:

Before the game begins, all players group near the timing device used for play, be that a microwave with a kitchen timer, alarm clock, etc. As a group, decide on a suitable time for the round to last. However, please note, the longer the round, the more difficult it is to survive the round for survivors (you may want to decrease the round time the more killers there are). Please add 1+ minutes to the round time to allow for players to get into position.

Deciding the order of killers. You may simply decide as a group, or if you need to use chance to decide, draw straws, roll dice, pick a card, etc.

Like hide and seek, the killer or killers (for larger play groups) start outside the main play area, be that a house, campground, etc. (if you’re concerned about scaring the neighbors, you might have the killers start in the garage, basement, etc.) and count to a predetermined amount of time (1 minute for example), while the survivors devise a plan or hide (hiding is not required — survivors may continue moving at all times to evade a killer, but cannot leave the main, designated play area).

The killer(s) must enter the main play area after counting down to the starting point time and cannot leave again once the round has begun.

Killed players must lie down where they were killed for the remainder of the round.

Killing a survivor counts as 1 point. Destroying a killer counts as 2 points. Winning a round through elimination before the timer goes off, counts as a bonus 3 points. After all rounds have been completed, whichever player has the most points, wins.

Killer gear: The killer(s) must wear a mask and gloves. One, so that the killer is clearly distinguishable from other players at all times. And two, this serves as a handicap for the killer’s line of sight and operation of door handles, etc., to offer balance to gameplay.

How to earn points as a killer: As a killer, in order to gain points, you must eliminate survivors. To kill a survivor, you need only to touch them. If all survivors are eliminated before the timer ends, the round is over, with a bonus 3 points for all active killers.

Killer special ability: For a killer only, they may eliminate players by touching them with thrown objects, balled-up socks, Nerf balls, bean bags, etc. If there’s only 1 killer, they may have 3 throwable objects. 2 killers, 2 objects. 3+ killers, 1 object. After an object has been thrown, a killer may not use it again.

Survivor gear: The survivors may not wear masks, hats, hoodies, or anything else on their heads nor can they wear gloves, so as to not cause confusion about who’s a killer and who is not. Survivors may carry and use flashlights and phones for texting one another.

How to earn points as a survivor: As a survivor, in order to gain points, you can either destroy the killer or run out the clock. In order to destroy a killer, you must touch their back twice. Touching them anywhere else does not count as a hit and you must touch them with your hand. You cannot use objects, thrown or otherwise. You cannot touch the killer’s back twice within the same hit, double-tapping them for example would still only count as one hit. You may not use the same hand twice after a successful hit. One hit to the killer from two separate survivors, no matter the duration between, will count as a kill, but only the survivor who delivers the second attack will gain kill points.

Survivor special ability #1: Only if a survivor witnesses the death of another survivor, may they revive the killed player. In order to revive another survivor, you must place both hands on them, and count (in a normal speaking volume and speed) to 10, using the 1-1-thousand, 2-1-thousand, 3-1-thousand method. While it would serve as a huge advantage to rescue a survivor, be careful, as the killer might be using them as bait or otherwise hear you counting and come for you.

Since this game is brand new and not yet battle-tested, it remains to be seen what clever techniques and strategies players might come up with. For both killers and survivors I think, the main strategy will be about baiting other players into position for an attack.

For instance, a killer’s best chance at touching a survivor is to corner them, but that also leaves their back exposed to other survivors. Survivors can use flashlights to communicate or flush a killer out.

All players may move items in the house, open and close doors, and turn lights, TVs, radios, etc. off and on without limitation.

Variant #1: Hunted — This would essentially reverse the ratio to where it’s all killers, except for one survivor. This would need to be played at night, with the lights off. All killers have flashlights and the survivor has to make it through, from point A to point B, where there’s a designated finish line or flag they must touch, without being killed, in order to win. This is not for the faint of heart. We used to play this with paintball guns and it’s really intense. It’s a little like playing the video game Manhunt, only in real life.

Note: Unless you live in a mansion, this game almost certainly needs to be played outside in a much larger area. Forest areas, farms, etc. are perfect.

Beyond the basic rules of the game, players are of course free to get as theatrical as they like with costumes, characters, fake weapons, fake blood, fog machines, strobe lights, music, etc.

I would say the activity of this game is a cross between hide and seek and tag football. It can get a little rough. Having played these kind of games before, even though they’re just games, they almost always activate the flight part of our fight or flight mechanism. People will get scared and full-on sprint and scramble to evade a “killer,” which is of course all part of the fun of it. If you’re choosing to play indoors, you may want to put the expensive devices in the closet and otherwise walk the house and clear any obvious debris to avoid tripping and injuring yourself or breaking anything valuable.

Again, this game is intended for adults. If you’re younger, please seek the supervision of an adult before playing, especially since it’ll likely be in their home that you’ll be playing. Either way, you’re wholly responsible for your own safety and respecting other people’s safety and property, if you choose to play this game.

While I’ve loosely played these kinds of games with friends in the past, I’ve only just now created the game officially, on paper, and have not tested it extensively to find the pitfalls and refine the rules for balanced gameplay. While I have no doubt I’ll have a blast playing this game some time in the future, I have no idea if other people will be interested and receptive to it.

I would be very excited if people started picking up this game, playing it, offering suggestions on refining the rules, additional rules, or even alternate play modes or rule variants. If anyone does end up playing, if you share photos or video with me, I’ll publish those below.

If this really blows up, which I highly doubt, but if it does, I’ll consider even taking it to another level and perhaps building play kits with all the required items.