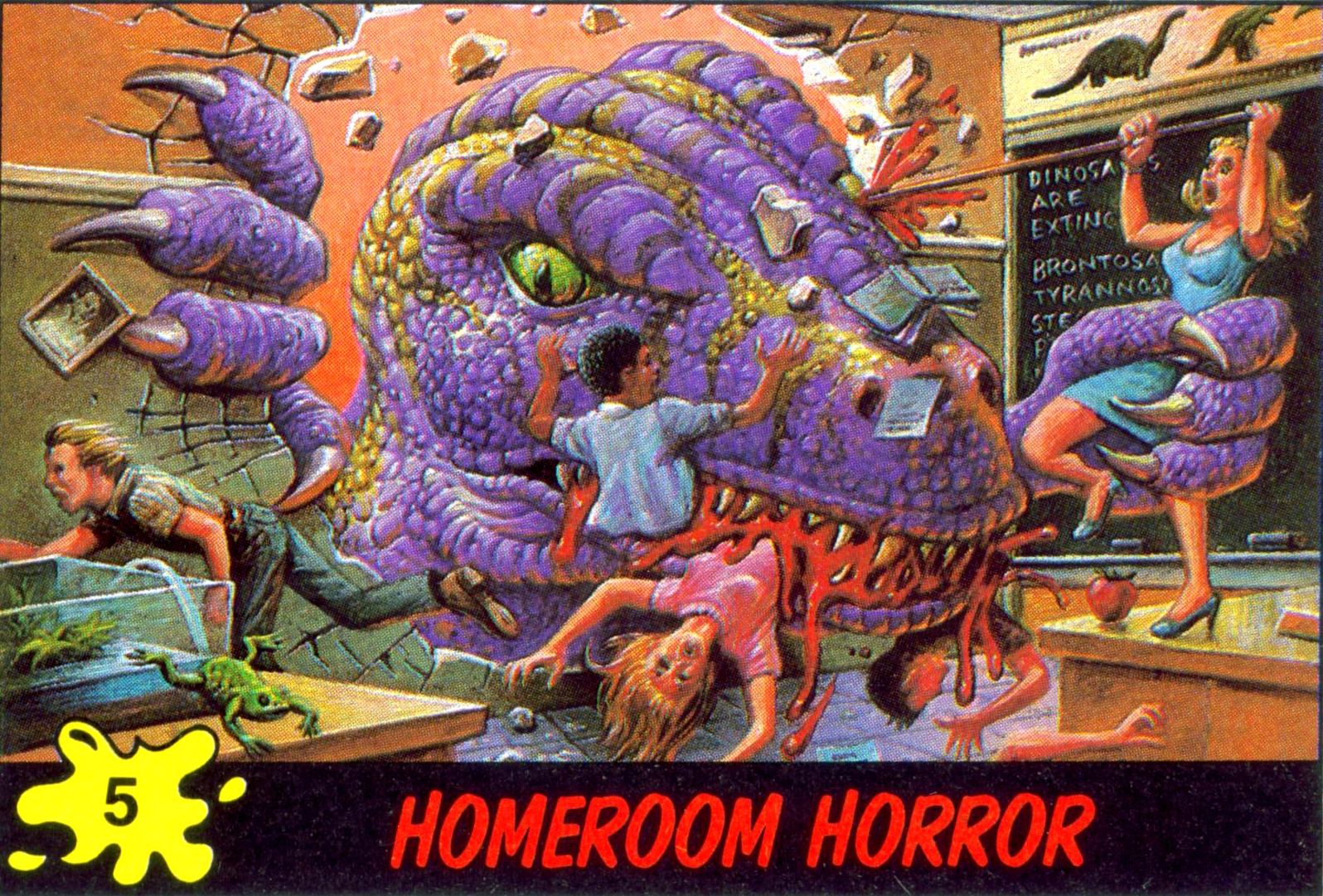 The box office dominance of Jurassic World has truly been a sight to behold, and the numbers show that the long-awaited sequel not only had the most profitable domestic opening weekend of all time, but also the biggest global opening in the history of mankind. It seems that dinosaurs are hotter than ever right now, proving to be even more popular with the masses than our caped superhero pals.

Of course, the way things go in Hollywood is that one massively successful film begets a handful of similar ones, which has been reflected by the recent superhero and found footage booms that have taken over the big screen these last few years. Unsurprisingly, a Jurassic World sequel is already in the works, and it seems that dinosaurs are currently Hollywood’s hottest commodity.

In the wake of this past weekend’s record-shattering box office news, I can’t help but wonder what’s next. And I’ve got a pretty clear vision of what SHOULD be next…

Released by Topps in 1988 and created by Gary Gerani, Dinosaurs Attack! was a trading card series inspired by the Mars Attacks line of the early 1960s. 55 base cards and 11 stickers comprised the series, which told the story of dinosaurs transported through time to the present day, thanks to a scientific experiment gone horribly wrong. Each card tells part of the story, as dinosaurs wreak havoc all across the world. 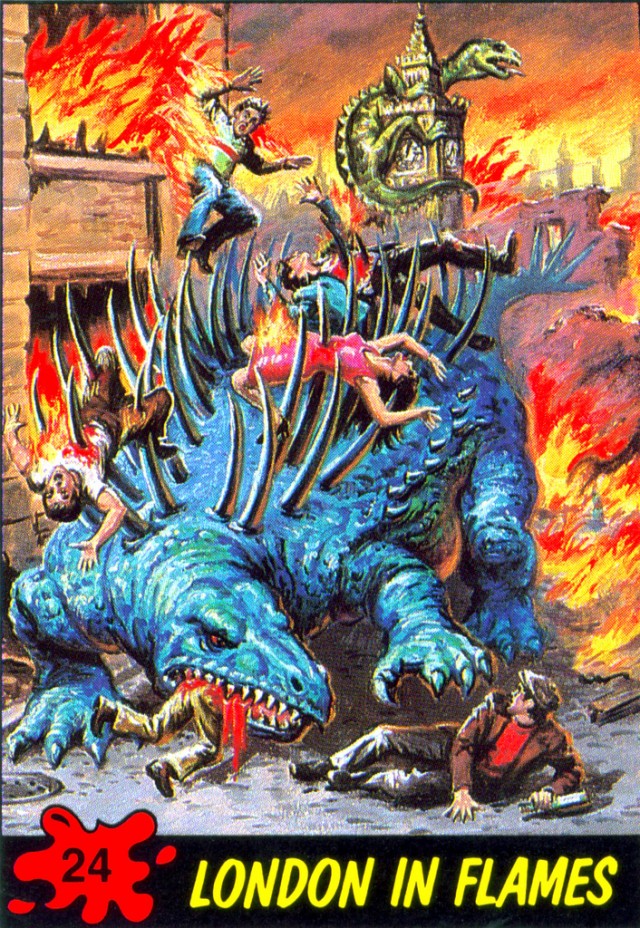 The most notable thing about the Dinosaurs Attack! cards, and what made them so awesome to me as a kid, is that they were particularly violent, pulling no punches in the gore department. On one card, a grandma blasts the eyeball of a giant reptile clean off with a shotgun, while another depicts an open-mouthed T-Rex devouring the human passengers on a roller coaster. Blood, guts, and pure insanity was the name of the game.

The final cards see the remaining dinosaurs being ripped apart as the time travel effect is reversed, which comes in the wake of the lead scientist sacrificing himself to the six-eyed ‘Supreme Monstrosity’ – a massive, Devil-like dinosaur that fans often refer to as ‘Dinosaur Satan.’ Survivors of the brutal attacks begin to rebuild the world, which has been left in a state of post-apocalyptic ruin.

It’s somewhat of no-brainer, looking back on the gruesome trading cards, that Dinosaurs Attack! is ripe for a feature film adaptation. In fact, Tim Burton had at one point considered bringing the property to the big screen. Unfortunately, Burton decided against it and made Mars Attacks instead, and it was the release of Jurassic Park that played a big part in him disregarding his initial plans.

Wouldn’t it be wonderfully ironic if it ended up being Jurassic World, the third sequel to Jurassic Park, that led to Hollywood bringing that Dinosaurs Attack! movie back from the dead? It seems only fair, doesn’t it?

There’s one standout scene in Jurassic World that feels like it’s ripped straight out of the Dinosaurs Attack! series, and it has proven to be a highly controversial one. A female character is pulled into the sky by a pack of winged monsters, and after playing around with her body for a bit, one of them flies her over to a giant water tank – where a hungry sea monster completely devours both human and dinosaur. 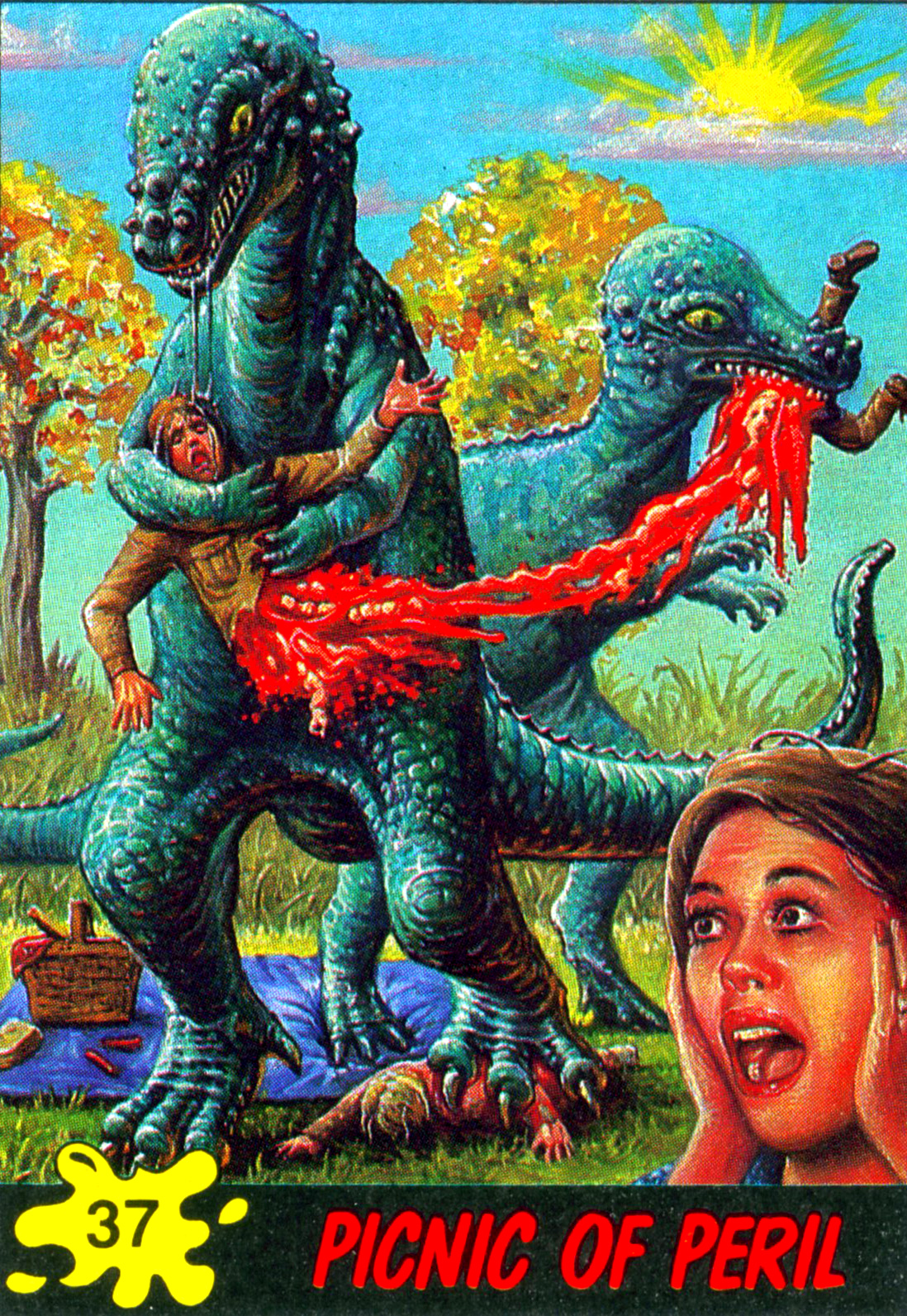 It’s a memorable scene that many have deemed not suitable for children, and though there’s nothing particularly graphic about the kill, oodles of think pieces this week have suggested that it was completely unnecessary and downright cruel. I don’t know what this says about me but it was one of my favorite scenes in the film, and it admittedly left me yearning for a full-on Dinosaurs Attack! movie.

Of course, the main difference between a Jurassic Park movie and a Dinosaurs Attack! movie is that the latter would almost have to be equipped with an R rating. I suppose a PG-13 adaptation could still be fun, as Tim Burton went that route with his adaptation of the similarly violent Mars Attacks cards, but a watered down, kid-friendly Dinosaurs Attack! film just doesn’t excite me in quite the same way.

An R-rated, big-budget depiction of complete dinosaur mayhem would no doubt require a huge risk on the part of a major Hollywood studio, but it’s hard not to wish for one right about now. Jurassic World whet my appetite for dinosaur-on-human mayhem, and I’m fairly certain that the only thing that could fully satiate my desire would be a dinosaur movie that’s geared more toward horror fans than families.

And Dinosaurs Attack!, if Hollywood is up for the challenge, could be that movie.

BY THE WAY: Fans of the Dinosaurs Attack! trading cards will want to pick up the same-named graphic novel that recently came out in celebration of the line’s 25th anniversary, which was written by creator Gary Gerani!