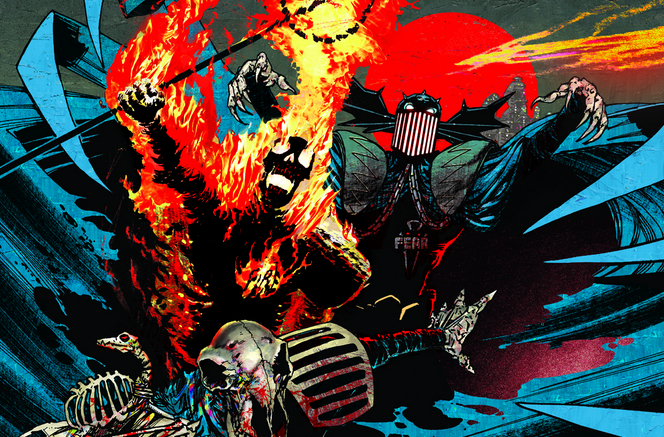 I recently wrote a little bit about how I believe a love of horror was inevitable in my life when I look back to my childhood.

In that first article I focussed on the characters within my favourite cartoon shows that had undeniable and recognisable horror influences and how I found myself drawn to them visually. Today I’m going to move forward a few years to my early teens and consider the horror within my favourite comic book character at the time … Judge Dredd.

If you grew up in England and were of a certain age during the 1980s and 90s it’s VERY possible that you read 2000ad. It was a magazine size comic book that would print 4-5 separate stories each week featuring different characters on a rotating basis, the only character who had a locked down slot in the comic was of course, Judge Dredd.

Dredd exists in a post apocalyptic near future world where the population of the planet have had to congregate within massive ‘Mega-Cities’ to escape the vast areas of irradiated land the war has left behind. Within these cities ALL aspects of policing, law enforcement and punishments are carried out by the Judges, there are simply too many people and too many crimes to make a normal judicial system work so instant sentencing comes into effect … which can often result in a death sentence and a swift bullet to the head.

If your only experience of Judge Dredd is from the Hollywood movies then you could be forgiven for thinking Dredd is basically just about crime and gun battles, but nothing could be further from the truth. Dredd as a comic strip has survived as long as it has because from the very beginning the writers decided that within the walls of Mega-City One anything can happen!

Aliens, ghosts, time travel, dinosaurs, monsters, creatures from other dimensions … Dredd has met them all, punched them all and defeated them all. That is the magic of the character and the story, Dredd never changes (well, almost never) he is the rock that the readers attach themselves to, the eye of the storm. Everything around him can be pure insanity and glorious chaos but he will deal with it the same way he would deal with a parking violation … barking orders and looking for the most clinical way to save the day. 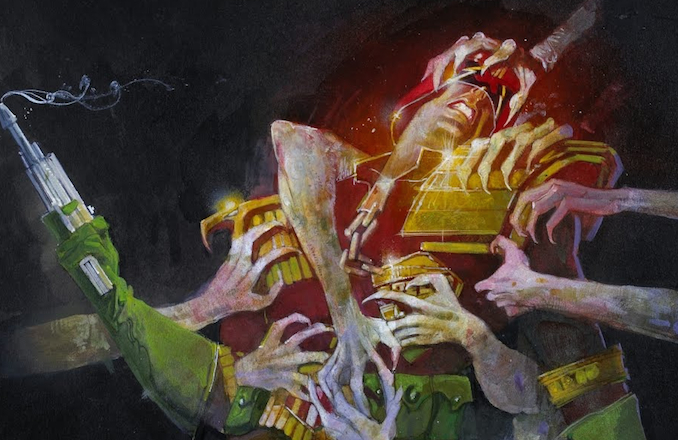 When Mega-City One scientists succeed in developing an experimental time travel device named Proteus, Judge Dredd and Judge Anderson are ordered to use the machine to travel 13 years into the future and discover if a psychic prophecy foretelling the destruction of the city is genuine and will actually come true.

When they arrive in the future they find the city in ruins and almost totally deserted. The Judges in this time have somehow become mindless vampiric creatures who feast on the few remaining survivors and the entire city is ruled over by a mysterious creature named ‘The Mutant’ …

As the story progresses we discover that the Mutant was responsible for the disaster that befell the city and Dredd even meets his future self who has become an unstoppable Zombie!

A large portion of the artwork was provided by Steve Dillon who would go on to illustrate the epic Preacher comic book co-created by himself and Garth Ennis. 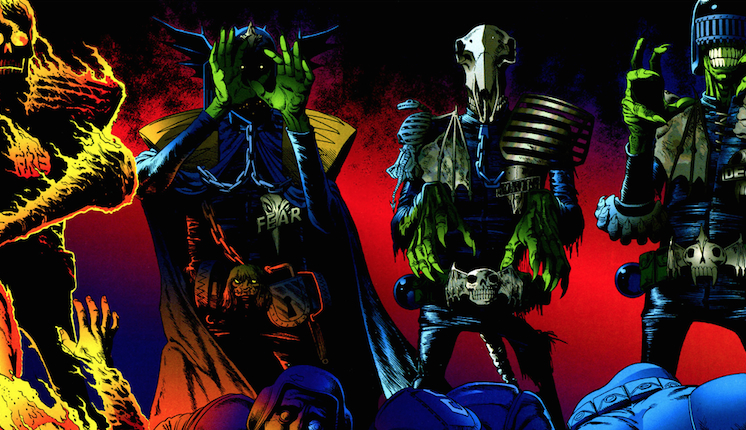 Death, Fear, Fire and Mortis … The Dark Judges. They originally existed in a parallel dimension and were law-keepers not unlike the Judges of Mega-City One. Their leader Death, became obsessed with the pursuit of eradicating all crime which eventually led him to the ultimate logical conclusion … If all crime is committed by the living then life itself must be a crime.

Death soon comes into contact with the supernatural ‘Sisters of Death’ Phobia and Nausea, who grant him and his followers eternal life by turning them into undead beings. Following this transformation the four Dark Judges proceeded to kill the entire population of their world.

When Dimension-jumping technology becomes a reality in Mega-City One a group of unfortunate explorers stumble upon this ‘Deadworld’ and are swiftly murdered. Filled with excitement at the thought of a whole new planet of living humans to kill, Death takes the Dimension jump device and travels alone to Mega-City One where he is ultimately defeated and his spirit form imprisoned within the mind of the psychic Judge Anderson.

Sensing Death is in need of assistance it’s not long before Fear, Fire and Mortis also arrive to unleash their own chaos and bloodshed while attempting to free their leader. 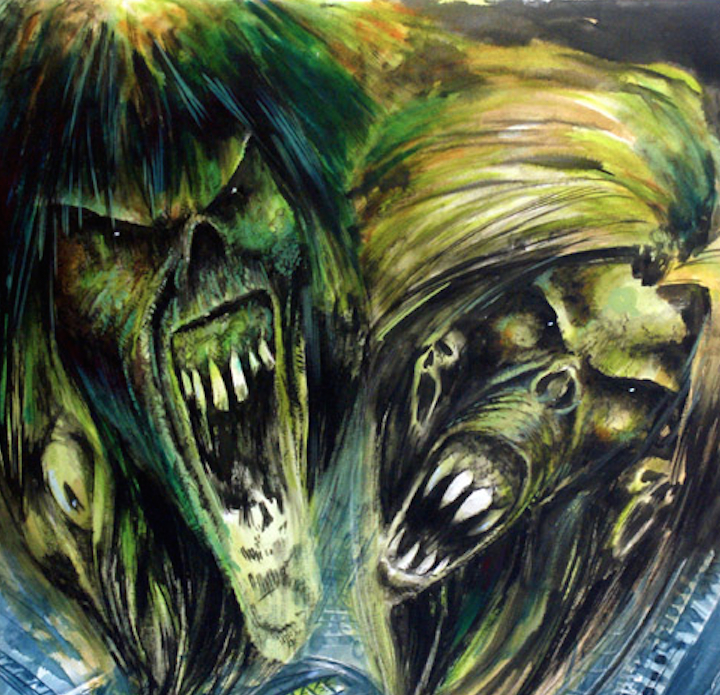 After becoming disillusioned with the justice system in Mega-City One, Dredd makes the decision to resign as a Judge and take the ‘Long Walk’ into the Cursed Earth wastelands. Fearing that the public will become volatile if they discover Dredd has left the city Chief Judge Silver replaces him with a clone created from his own cells named Judge Kraken.

A few months later the mentally vulnerable Kraken begins to be telepathically manipulated by the Sisters of Death who want to create a means of travel between Deadworld and Mega-City One. They succeed, and after releasing the Dark Judges from a dimensional prison they begin slaughtering the population at a rate of roughly ten thousand citizens per day. They block the Sun plunging the city into permanent darkness, disease spreads rapidly, suicides increase … Necropolis is created.

Dredd eventually hears news of what is happening hundreds of miles away and decides to end his exile and begin the long the journey back home to confront the Dark Judges once more. 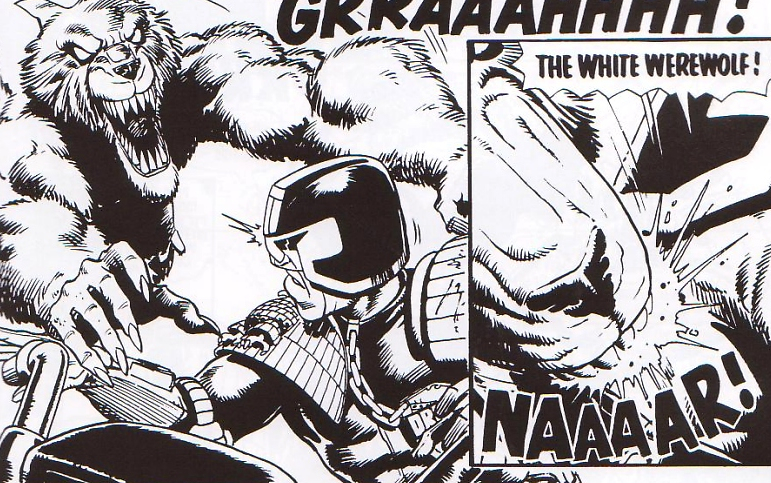 While Mega-City One is recovering from the effects of a nuclear attack by soviet forces, Werewolves start to emerge from large cracks beneath a damaged city block. Dredd is sent to investigate the source of the transformations and travels deep underground to the ‘Undercity’ (The ruins of old New York) where he discovers a radioactive compound that is triggering the changes in anyone that comes into contact with it. 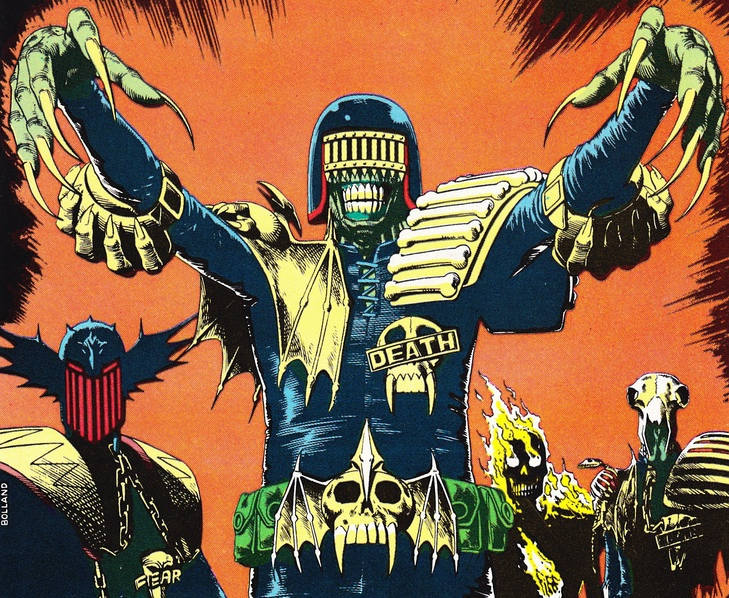 There are many, many more examples I could list but these are a select few that stayed in my memory over the years and really did add fuel to my early horror loving fire.

If you’ve never read the classic Judge Dredd epics and you like the look of what you have seen here today then I cannot recommend these stories enough … At its best there is nothing like Judge Dredd in terms of storytelling and drama. It’s action packed, weird, political, funny and yes … sometimes FULL of genuine horror!