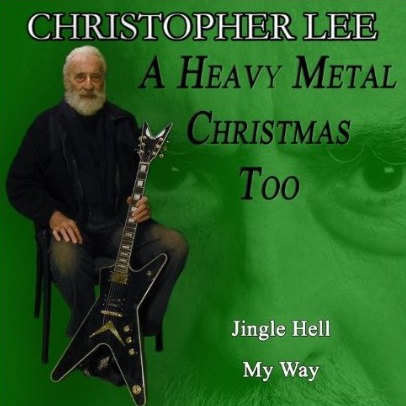 Mirror, mirror on the wall, who’s the most badass horror icon of them all?

If you ask this question into your mirror, the face that will appear before you is that of Sir Christopher Lee, a man who has done it all in the world of horror. Now 91 years of age, Lee is still as active and relevant as he ever was, most recently appearing in The Hobbit: The Desolation of Smaug – once again reprising the role of the evil wizard Saruman. While most 90-year-olds are being spoon fed their dinner and soiling their diapers at old age homes, Lee has seemingly defied the laws of aging, and in fact he even embarked on a brand new career a few years back. I expect you’re quite familiar with Christopher Lee, the actor. But today I want you to meet Christopher Lee, the heavy metal musician.

A longtime singer, Lee made his debut in the world of heavy metal in 2004, singing a duet with the band Rhapsody of Fire. The song was called “The Magic of the Wizard’s Dream,” and Lee continued to work with the band for several years afterward, as the narrator of subsequent albums. Gaining some steam as a heavy metal musician, the coolest senior citizen in the world released his own album in 2010, titled Charlemagne: By the Sword and the Cross. The award-winning album was followed up earlier this year by Charlemagne: The Omens of Death, a sequel that was released on May 27th.

Sandwiched in between those two albums, the EP A Heavy Metal Christmas took the holiday season by storm last December, featuring Lee’s renditions of ‘The Little Drummer Boy’ and ‘Silent Night.’ Needless to say, the joy of listening to a 90-year-old horror icon belt out metal versions of holiday classics brightened the spirits of horror fans the world over last year, leaving us all with only one Christmas wish for 2013; MORE, PLEASE.

Always one to give us what we want, Christoper Lee has indeed returned for more this holiday season, unleashing A Heavy Metal Christmas Too last week. Another two-song EP, this one features a heavy metal remake of ‘Jingle Bells,’ titled ‘Jingle Hell,’ along with a cover of Frank Sinatra’s ‘My Way.’ Described by Lee as being a bit naughtier than the song we’re all familiar with, ‘Jingle Hell’ is of course the highlight of this particular EP, an epic duet between the horror icon and singer Li Li that puts a delightfully sinister spin on the jovial tune.

You can check out a preview of A Heavy Metal Christmas Too below, and purchase the EP over on Amazon. You get both songs for only $1.78, a small price to pay for the sheer badassery on display in Lee’s second annual Christmas album.

Up next from Lee is Metal Knight, which is currently in production and set for release in 2015. Keep ’em coming, sir!